Home News Giving thanks across racial lines in Jasper, Texas

Giving thanks across racial lines in Jasper, Texas

Churches unite for historic shared service on the Sunday after Thanksgiving 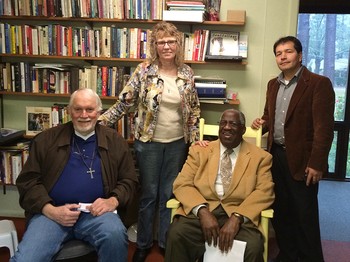 Whenever the Rev. Cyndi Wunder frequents the shops and the businesses of Jasper, Texas, she gives thanks for the simplest of interpersonal encounters, which belie—even as they help to heal—a world of pain in the small East Texas town.

Over seventeen years ago on June 7, 1998, James Byrd Jr., a 49-year-old African-American man, was dragged to his death behind a pick-up truck in Jasper by three men who were subsequently convicted of his murder. One was later executed for the crime, which eventually led to the passage of the Hate Crimes Prevention Act of 2009, named both for Byrd and Matthew Shepard, who was murdered in 1998 outside of Laramie, Wyo.

Wunder, a native of the Northwest, was called in December 2014 through the Presbyterian Mission Agency’s Small Church Residency Program to serve as pastor of the First Presbyterian Church of Jasper. Well before the congregation extended her the call, its leaders had been engaged in the hard work of defining the church’s mission by acknowledging Jasper’s painful past, its racially charged present and the church’s own history.

Toward that end, it formed and incorporated Peace Beyond Understanding (PBU)—a 501(c)(3) nonprofit dedicated to promoting peace and justice for all people—in the fall of 2014. The church intentionally created the director’s position as bivocational, envisioning a candidate who would serve half time with the nonprofit and half time as the church’s pastor.

And a year later, as the hard work continues, it is bearing signs of progress and promise.

This Sunday, Nov. 29—when congregations across the U.S. gather together on the Sunday after Thanksgiving to give thanks to God and to mark the first Sunday of Advent—First Presbyterian Church will hold its regular service of worship an hour early so that its members can join Greater New Bethel Baptist Church for its “Families and Friends” service.

“Although our theologies and service styles are different, we are seeking to create a joint witness across racial lines in Jasper,” Wunder says. “Our session voted unanimously to change the time of our service to 9:30 a.m. so that we can have our worship and then go on over to theirs.”

The idea for the shared service grew out of—and is a true incarnation of—PBU’s primary initiative, “Friend to Friend,” which seeks “to connect individuals across racial barriers in order to learn from one another, increase empathy, and develop authentic, genuine relationships.”

“As they were talking about how we in Jasper can promote racial reconciliation and continue getting to know one another,” says Wunder, “Pastor Lyons said to Hill [Kemp], ‘Can your church come join us?’ And he said, ‘Of course we can.’”

A shared meal with the congregations will follow the service of worship at Greater New Bethel Baptist Church. “That piece of simply showing up and being with one another and sharing food is a huge part of creating community,” Wunder says, “and we’ll be following it up in February with a service that is their celebration of soul food.”

Wunder says that “Friend to Friend” is about establishing relationships “that are under the radar.”

“It’s not marching in the streets,” she says, “it’s just very subtle.”

Less subtle, perhaps, are First Church’s efforts not only to build but to literally rebuild community.

“One of the other things that has happened in the community is that we had an arson fire that burned down a small beauty shop and another one that burned down a church, and we have reached out to both of these people,” Wunder says. “With the church, we couldn’t afford to rebuild their building but we told them they were welcome to come and worship with us. Even though they elected not to do that, because they didn’t want to bring negative attention to us, it was an incredible community-building outreach.”

The beauty shop is owned by a disabled, African-American Jasper resident. “Losing the rental income for the shop has been really hard for him,” Wunder explains. “There’s not much he can do to make this better, but we can. So we’re rebuilding it.”

Wunder says that the people of Jasper initially thought the church was taking advantage of the business owner, just “buying up what has burned down.”

“There was a little bit of distrust, but now that’s gone,” she says, “and now people slow down and they look and they say, “Wow, you’re still doing this and you’re still participating. And so that’s been a huge shift.”

People will regularly stop Wunder in stores and tell her that that what she and the church are doing is making a difference.

“I wish we could do more; I guess that’s my biggest sadness about it,” Wunder says. “’I love that you’re doing this,’ people will tell me, ‘but my roof leaks, can you help me?’ We don’t have the manpower to do that. We would love to, but we just don’t. The need is there and we’ve tapped into some of that. We are able to answer a piece of that, but not as much as we would like to.”

PBU as a whole was also the driving force behind a service of lamentation that was held in Jasper on June 18. “Here in Texas they have a Juneteenth celebration on the 19th of June that marks the end of slavery,” she says. “We thought we should really mourn and lament that our relationships are still broken before we go and celebrate, sort of like a Good Friday before Easter thing where we need to admit that things are not quite where we want them to be. So we invited a number of churches and we held this service on June 18. God’s timing is so perfect. That was right after [Charleston’s] ‘Mother Emanuel’ Church massacre and so we had such a deep need to come together and mourn and lament our broken relationships. The service had been in the planning for over a month and a half. So it was incredible.”

In this season of Thanksgiving, Wunder is grateful for Jasper’s affirmation, both collectively and individually.

“I never know when it’s going to happen, but I can be walking into Lowe’s and hear someone say, ‘Hey, you’re my friend. I know what you’re doing,’” she says. “I can go into the bank and have an African-American teller say to me, ‘I want to tell you my story,’ and all of a sudden in the middle of a bank transaction, I find myself receiving this grace.”

Wunder has one very specific prayer in mind for Thanksgiving.

“I would pray for a deeper compassion and a willingness to slow down our process and really meet people who have been involved and affected,” she says, “and to meet them not as people of this or that community, but to meet them as children of God and know their stories and listen deeply to their truths. I think that would be my prayer.”