Tackling the taboo topic of sexual abuse in Egypt 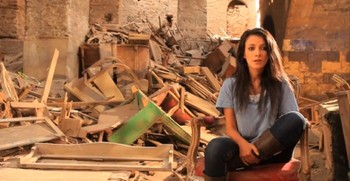 Screen capture from "In Her Place," available on YouTube.

The chair is empty at first, then a woman enters the scene to sit in for another woman or child who has experienced sexual assault and betrayal by someone she trusted—someone she would have never imagined would harm her—a brother, neighbor, uncle or cousin.

“In Her Place,” a 15-minute video created by international award-winning film director Maggie Morgan, shares the true stories of the sexual assault of four women and girls, one as young as 5 years old. These stories are heartbreaking, true and representative of the treatment of women and children in all cultures of violence.

The Evangelical Presbyterian Church of Egypt’s Council of Services and Development (CSD) commissioned the video. CSD, one of 12 councils in the Synod of the Nile, promotes development services and ministries of compassion and justice in Egypt’s eight presbyteries, which serve 400 Presbyterian churches and more than half a million members.

“Addressing issues of sexual and gender-based violence is a very critical and sensitive issue in Egypt, due to our conservative culture,” says Engie Ibrahim, coordinator of CSD’s Advocacy Campaign Against Sexual Abuse. “This tends to complicate, feed and reinforce these issues, as it makes victims feel responsible and shameful for their abuse and powerless to do anything about it.”

Ibrahim says the campaign’s main goal is to work with the media, community decision makers and church leaders to find practical ways to eradicate sexual abuse, expose and prosecute abusers, and speak up for victims of abuse who cannot speak for themselves, particularly in poorer communities in Egypt.

“Since the Egyptian church has a prophetic role to change the culture, it couldn’t turn a blind eye to such critical needs,” Ibrahim says. “We want to break the silence, remove the stigma for victims, provide a safe and healing community for survivors and transform the culture.”

Shaher Luka, CSD executive manager, is pleased with progress so far, but agrees there is much more to be done. Female genital mutilation is one example. “In 2012, during the rule of the Muslim Brotherhood, FGM increased dramatically,” he says. This increase happened for many reasons, including free medical convoys sponsored by the Muslim Brotherhood to do these procedures. “This has made the duty of the church more difficult;” he says, “however, we will continue fighting against such phenomena.”

So far the “In Her Place” video has reached about 30 million households via public and Christian TV, according to broadcast media reports.

“CSD is essential in relieving the pain and suffering of many in Egypt,” says the Rev. Dr. Radi Iskander, CSD chairman. “St. Paul taught us we are to ‘encourage the fainthearted, support the weak,’ (Thess. 5:14). Thus our council seeks to empower and strengthen all lives with practical assistance and hope for a positive future of mind, body and spirit.”

Ibrahim is collecting success stories resulting from awareness and advocacy efforts, including the following examples of progress:

In 2016, CSD will commemorate 35 years of ministry to empower all Egyptians. The council’s vision is to empower local churches and prepare church leaders to positively transform society and the church through the development of people and place.

“Egypt is not alone in speaking up to stop sexual violence,” says Shannon Beck, Presbyterian World Mission reconciliation catalyst addressing the root causes of sexual violence. “Such violent acts finally are being addressed, in many cases, as the result of advocacy and awareness efforts led by the church as a whole. I hope many will watch this video and support this critical work.”

To Join a new PC(USA) mission network addressing issues of violence against women and human trafficking, contact Shannon Beck at shannon.beck@pcusa.org or 800-728-7228 x5041.

To join the Presbyterian World Mission’s Egypt Partnership Network, or for more information, contact Amgad Beblawi at amgad.beblawi@pcusa.org or 502-569-5314.

Support the work of the Council of Services and Development in Egypt by making an online donation to presbyterianmission.org/donate/E052081 or sending a check to: Presbyterian World Mission, PO Box 643700, Pittsburgh, PA 15264-3700. Checks should be made to Presbyterian Church (U.S.A.). If giving online or by mail, please indicate your gift is for CSD, fund E052081.