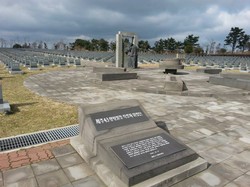 Jeju Island is known as a choice honeymoon location and one of the most scenic places in South Korea — even referred to as the “Hawaii of Korea” by travel writers. But it has a much darker history that the country has just begun to explore and acknowledge — a history introduced to two Young Adult Volunteers earlier this month.

From 1947 to 1954, Jeju Island was the site of a government-endorsed massacre in which 15,000 people or possibly many more, including civilians, were killed by police, military, paramilitary groups and armed guerrillas.

On March 1, 1947 — three years before the start of the Korean War — local police, then under U.S. military control, opened fire on a group demonstrating against U.S. military governance, killing six people. An armed uprising against the interim South Korean government and the U.S. military in April 1948 was met with progressively stronger attempts to stabilize a volatile situation, involving first the police and then anticommunist paramilitary groups and ultimately the military. The suppression strategies used in ensuing years were extremely brutal and included torture, indiscriminate killings, and large-scale massacres.

Debate about the exact role of the U.S. government and military in these events continues. 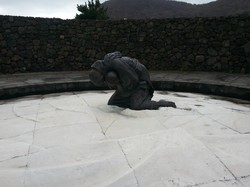 This statue commemorates a woman and child who were chased out of their village in the winter. Their bodies were found in a frozen snow bank later. —Kurt Esslinger

South Korean government leaders, for their part, opened a truth inquiry in 2000 and formally apologized four years later. In 2012 the government opened Peace Park, which commemorates those who died.

Kurt Esslinger and Hyeyoung Lee, coordinators for the YAV program in Daejeon, South Korea, spoke to the YAVs about this episode in Jeju’s history prior to their visit there. “Jeju is a perfect place for us to explore what we tell them they will experience as a YAV in Korea, both joy and ‘han,’” Esslinger says. “There is no English translation for ‘han.’ It is a Korean word for deep, deep suffering and feeling wounded. Jeju is a gorgeous, pristine island, but it has this extremely gruesome history.”

YAVs in South Korea work to create relationships with children in underprivileged communities through activities such as games, music, teaching English and learning Korean. Jordan Bailey, a YAV who works at an after-school childcare center teaching music and interacting with children, says he was deeply disturbed by his visit to Peace Park. “It affected me staggeringly,” Bailey says, noting in particular his discovery that the U.S. government may have played a role in the massacres. “For me, that’s the part that makes me angry, to see how we are involved with that.” 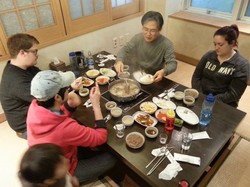 YAV Kalyn Stevwing experienced Jeju in a similar way, feeling angry and deep sadness at the loss of life, particularly of the very young. “There was a video playing where victims showed their scars from being tortured and harmed,” Stevwing recalls. “It was awful, and it infuriated me. Harder still was seeing their memorial with the many names of the people who lost their lives in the massacre. There were many children who weren’t even 24-months-old yet, and many who were under the age of 10.”

South Korea itself is just beginning to grapple with this terrible history, Esslinger notes. Until 1987, the country was ruled by military dictatorships. The history of Jeju was not discussed or even known within South Korea for at least a decade after the first free election in 1987.

As a balance to visiting Peace Park and facing the horrors of war, Esslinger took the YAVs to visit the Rev. Jeong Hoon Lee of Neulpooreun Church. The YAVs, as well as Esslinger and his wife and co-YAV coordinator, Hyeyoung Lee, asked the pastor where God was when the massacres occurred. The pastor offered an answer that stirred hope: “God was alongside the villagers of Jeju, bearing the weight with them and planting seeds of hope.” 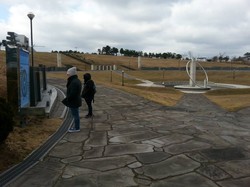 The names and ages of those who died on Jeju during the massacres are written on this monument. Many were children. —Kurt Esslinger

Esslinger emphasizes to YAVs who visit Peace Park that they have a role in working for the redemption of experiences of “han,” transforming the community so that such horrors never happen again. They have continued to discuss their visit and what they felt and learned there. “You have to realize there are horrible things going on in the world, and they do need to be stopped, but you need to take a step back and see the beauty in the world too,” Esslinger says. “It reminds you of what you’re fighting for.”

If you’d like to apply to be a YAV, applications for U.S. placements are being accepted through May 1.

If you’d like to support the YAV program, you can make a contribution now.