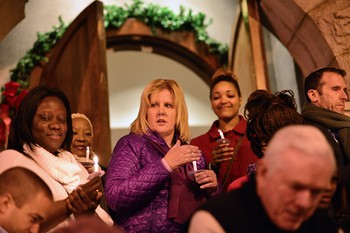 Members of North Avenue Presbyterian Church in Atlanta gather outside the church for a candlelight vigil with Street GRACE, a faith-based nonprofit fighting human trafficking.

When Jill Bolander Cohen’s stepdaughter called her one afternoon, she didn’t expect her stepdaughter to be asking for her to help a high school victim of human trafficking. “This young woman’s mother sold her to a trafficker for $25,000,” Cohen says. “Her mother needed the money to open and operate her business, and the young woman’s trafficker was shipping her around the country as she worked to pay back her mother’s debts.”

Cohen, whose roots run deep in the Presbyterian Church (U.S.A.), is the founder of the Lifeboat Project, a Florida-based nonprofit that works to fight human trafficking—and a recent addition to the 1001 New Worshiping Communities initiative of the PC(USA).

As a result, her stepdaughter knew how to be on the lookout for potential victims. “When my stepdaughter called me about a young woman she suspected was a victim of trafficking, I began making calls to those in my network—to attorneys, to other advocacy groups, et cetera—to find her the help that she needed to be safe,” Cohen says.

“Florida—especially along the I-4 corridor—has one of the highest rates of human trafficking in the country [according to the National Human Trafficking Hotline and number of investigations]. It’s imperative that we bring light to this critical issue that impacts so many in our community and across the country,” she says.

Ryan Smith, Presbyterian representative to the United Nations, chairs the roundtable. “Many don’t realize that trafficking happens in different forms across various industries,” he says. “It isn’t necessarily just sex trafficking. And they don’t realize that trafficking is happening here in the United States. The goal of the roundtable is to raise awareness across the church, to provide resources to congregations, and to advocate for action to eradicate trafficking.”

Right next door
For Cohen, the commitment to fighting trafficking is part of her commitment to social justice issues in general. She has twice been a PC(USA) delegate to the United Nations Commission on the Status of Women, and she serves on the Central Florida Presbytery Immigration Task Force. She is also the Presbyterian Women Chair of Justice and Peace with the Synod of South Atlantic and the co-founder and vice president of the Greater Orlando Human Trafficking Task Force.

The Lifeboat Project began to take shape after Cohen attended Ecumenical Advocacy Days in Washington, DC, in 2011. During that event, she heard a presentation that addressed sexual exploitation and human trafficking, and she immediately knew she needed to take action in her home state of Florida.

“I was working as the justice and peace person for Central Florida Presbytery when I first attended EAD,” Cohen says. “About six months or so after my first experience there, I was back in Florida and began to hear more and more about human trafficking, so I began digging a bit deeper into the issue.” She then contacted the PC(USA)’s roundtable.

“That’s when I learned just how close to home this issue hit. [They] shared that I-4 is one of the most heavily trafficked parts of Florida—and my church sits about two minutes from there,” Cohen says. “Things just sort of snowballed from there.”

After her conversation with staff on the roundtable, Cohen decided to create an organization to fight trafficking. She brought together lawyers; members of the Freedom Network, a national alliance that works with survivors of trafficking; members of the Coalition of Immokalee Workers; and community leaders to plan how to target trafficking in Florida. “They were hungry to learn more and figure out ways to take action,” Cohen says.

Today, the Lifeboat Project aims to raise awareness of trafficking through training, to restore hope and dignity to exploited individuals, and to promote self-sufficiency by providing a safe residence. The Lifeboat Project also provides assistance for personal development and counseling and coordinates with other agencies to help victims of trafficking heal and transition back into society.

The organization also emphasizes educating children. “Children with disabilities, those who have run away from home, or those who face the realities of poverty or other disadvantages are often at the highest risk to become victims,” Cohen says. “We realized that someone needed to develop a tool or set of tools to help teach these children how to keep themselves safe and what to be on the lookout for.”

In partnership with Orlando-based Engineering and Computer Simulations and with help from philanthropists, the Lifeboat Project has developed an educational app for junior high and high school students to help fight trafficking. The ACT (Awareness Combats Trafficking) app was developed to help teach students how to recognize situations where trafficking may be occurring and to help them understand what to do if they suspect trafficking. “We’re so excited about the rollout of this app,” Cohen says. “Even in its early stages, it’s gaining the attention of legislators and educators across Florida and around the country.” The ACT app is slated to officially launch on January 10, 2016. 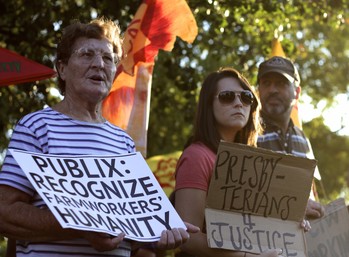 Forced labor
A PC(USA) mission partner, the Coalition of Immokalee Workers, also works in Florida to eradicate trafficking. The Coalition is a worker-based human rights organization that has been internationally recognized for its achievements in the fields of human trafficking, social responsibility, and gender-based violence at work.

Its anti-slavery campaign has uncovered, investigated, and assisted in the prosecution of numerous farm slavery operations across the Southeast and has helped liberate more than 1,200 workers who were being held against their will.

“This is the place in our economy where there is the most egregious mistreatment of workers in our society and rampant cases of modern slavery,” says Andrew Kang Bartlett, the Presbyterian Hunger Program’s associate for national hunger concerns. “As a church, that’s a huge part of why we’re involved with this work and the Coalition.”

“The Coalition of Immokalee Workers has had amazing successes in ferreting out these slavery rings, some of which were happening right in the small town of Immokalee, Florida, where the Coalition has its center,” he says.

“Because it is a coalition of the farmworkers themselves, they have been able to get really good information about secret hiding places where women and men are locked in to sleep at night or other places where traffickers hide those who are bound in modern slavery. In partnership with the US Department of Labor and other organizations, the Coalition has helped bring to light several major slavery rings across the region. Through the work of the Coalition, thousands have been set free and have found better lives for themselves and their families.”

Changing the law
Presbyterian congregations also have answered the call to combat trafficking. In Atlanta, which has become a hub for trafficking in children, pastor Scott Weimer’s church, North Avenue Presbyterian Church, is working to meet the needs of the community—including the need to eradicate trafficking.

The church sits at the corner of North Avenue and Peachtree Street—one of three intersections in Atlanta that a report commissioned by Mayor Shirley Franklin identified as hot spots for human trafficking.

“When the report was revealed and we saw that this was happening right outside of our doors, we asked ourselves, ‘How do we love our neighbors in this neighborhood we’re located in?’ ” says Matt Seadore, director of mission and outreach at the church.

Weimer, who was a presenter at the PC(USA)’s Big Tent gathering in 2015, felt it was important to speak out as a pastor, but had no idea how his congregation would respond.

“Reverend Weimer preached about the report the Sunday after it was released,” Seadore says. “The response to his sermon was really shocking. Older widows in our congregation offered up spare bedrooms in their homes to help care for victims; young people suggested that we hold middle-of-the-night outreach activities; and everyone agreed that prayer was needed. Dr. Weimer knew that there needed to be a carefully thought-out strategy leading to engagement. Over the next year, he met with more than 30 concerned church leaders from across the city, and together they launched Street GRACE [Galvanizing Resources Against Child Exploitation].”

Today, Street GRACE is a faith-based nonprofit made up of more than 70 community and church partners that mobilize community resources—financial, human, and material—to help individuals and organizations fight trafficking.

North Avenue Church was one of the first religious institutions to fight the sex trafficking of minors in Atlanta, and has been a leader in the effort over the past eight years. Through strategic community partnerships and strong support from the congregation, North Avenue Church has seen its efforts make a difference.

“As we began this work, we realized that one of the ways we could really make an impact was through advocacy,” Seadore says. “Just a handful of years ago, by law, buying or selling sex with a minor was a misdemeanor, punishable by a fine of only $50,” Seadore says. “As the city became more aware of the realities of trafficking, we began to take action. Laws are often slow to change, but through dedicated grassroots efforts, Street GRACE and North Avenue have seen a number of legislative victories over the past five years.”

In 2009 Street GRACE collaborated with three other nonprofits to create Lobby Day.

The first Lobby Day attracted roughly 50 participants and managed to catch the attention of state Senator Renee Unterman, who became a strong ally to the cause. That same year, Unterman authored a bill that added the phrase “sexual exploitation of children” to the state’s official definition of child abuse. The bill became the first law in Georgia to acknowledge the trafficking of children in the state.

Lobby Day continues, and in 2011, a bill known as Georgia’s Human Trafficking Law became law. The law changed trafficking from a misdemeanor to a felony, with a penalty ranging from 25 years to life in prison for trafficking a child under the age of 18. The law, reportedly one of the nation’s toughest crackdowns on trafficking, also carried increased penalties for pimping and aimed to rectify the fact that victims were routinely arrested for prostitution and treated as criminals.

“One of the things we’ve realized through all of this work is that trafficking isn’t this thing that only happens in shady places and dark alleyways,” says Seadore. “This is something that happens in poor parts of the city and in some of the most affluent areas. This is something that happens across all barriers of race and class. It’s happening online, in places like backpage.com, and in classified ads in papers, through social media, et cetera.”

“As a whole, this work has opened our church’s eyes to the issues of the day, helping us be more contextual in our ministry and have a deeper theology of place. When we realized that this was happening literally on our corner, we could not be cloistered inside. All of the sudden, what was happening outside our doors had to be addressed by us, and we needed to understand our context in a much deeper way to be effective in living out God’s mission in the world.”

Kristena Morse is an account director for a Louisville public relations agency and a former communications strategist for the Presbyterian Mission Agency.

LEARN MORE
For more about domestic efforts and what your congregation can do, explore the PC(USA)’s Human Trafficking Roundtable website and contact its staff.

The PC(USA) partners with ECPAT-USA to advocate for federal and state legislation that prevents exploitation, protects children, and guarantees that any child who is subjected to sexual slavery or sex trafficking will not be prosecuted in the courts for prostitution. ECPAT-USA promotes corporate responsibility, educates first responders and ordinary citizens, and empowers youth to take the lead against human trafficking.