A day of remembrance for Martin Luther King Jr. 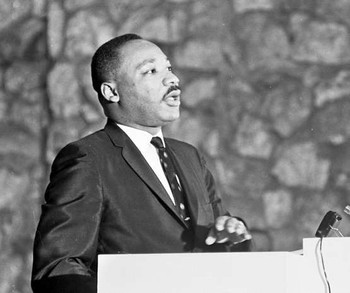 The Rev. Dr. Martin Luther King, Jr. is considered the most influential African-American leader of the Civil Rights era. He was America’s pre-eminent advocate for non-violence, and for 13 years in the mid-1950s and 60s, led the country’s Civil Rights movement. Throughout the country he’s honored with streets, highways and buildings named after him, and has a memorial on Independence Mall in Washington, D.C. He played a pivotal role in ending the legal segregation of African Americans in the south, is a Nobel Peace Prize winner and is honored with a national holiday.

The Rev. Dr. J. Herbert Nelson, Director of the Office of Public Witness for PC(USA), reflected on King’s relevance nearly 50 years after his death.

“The challenge today is not to let this holiday and his memory be diminished to suit sales or commerce, but to be one of a national recognition of his prophetic role in ministry,” says Nelson. “Dr. King was advocating for more than soup kitchens and food pantries, he was advocating for a refocusing of our nation’s moral compass, which requires an arc that bends toward justice.”

Born Jan.29, 1929 as Michael King, Jr. in Atlanta, Michael’s father, grandfather and great-grandfather were all pastors. In 1931, Michael King, Sr. became pastor of the Ebenezer Baptist Church and adopted the name Martin Luther King (MLK) in honor of German Protestant leader Martin Luther. The son followed his father’s lead in name, and eventually became a pastor at Ebenezer himself. MLK Sr. considered racism and segregation an affront to God’s will, and strongly discouraged any notions of class and racial superiority among his children.

Although not particularly religious or a serious student in high school, the younger King entered Morehouse College in Atlanta at just 15 years old. He questioned religion and open displays of faith, but a Bible class his junior year rejuvenated his faith and kick-started his ministry career. While in graduate school at Crozer Theological Seminary in Pennsylvania, King came under the spiritual influence of Morehouse College President Benjamin Mays, an advocate for racial equality who encouraged King to use Christianity as a vehicle for social change.

At age 25, while working on his Ph.D., he became pastor at Dexter Avenue Baptist Church in Montgomery, Ala. Shortly after, King began his civil rights career in earnest as the spokesman for the Montgomery bus boycott. It was the beginning of a long list of noteworthy civil rights accomplishments that included the March on Washington where he delivered the “I Have a Dream” speech, passage of the Civil Rights Act, a Nobel Peace Prize (at 35 he is the youngest person to be awarded), the Voting Rights Act and his stance against the Vietnam War. He was assassinated in 1968 at the age of 40.

“Dr. King’s gospel cut through a moral and ethical core of the nation; there were people who embraced it and others were angered by it,” says Nelson. “That made his preaching more of a prophetic voice of a nation, speaking to the nation about its sin as opposed to being pastoral and inclusive.”

Over the weekend Nelson delivered reflective sermons on King’s work at First Presbyterian Church in Muscatine, Ill., on Sunday morning and today at Monmouth College. Liturgical resources to commemorate Martin Luther King are available from the Presbyterian Mission Agency.

For more background and a full chronology of Dr. King’s accomplishments, visit The King Center website.