Home News Reclaiming 'Faith in 3:16' as a message of love instead of fear

Reclaiming 'Faith in 3:16' as a message of love instead of fear 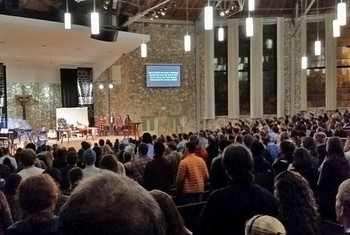 More than 1,100 students attended worship at the College Conference at Montreat. —UKirk at Western Carolina University

More than 1,100 students, educators and ministry staff attended the annual New Year’s gathering at Montreat Conference Center. The theme for this year’s College Conference, which wrapped up today, was “Faith in 3:16.”

“Our focus was to reclaim the well-known Bible verse in John 3:16 as a message of love and welcome,” says Montreat director for programs, the Rev. Katie Cashwell. “Too often it’s been used for hate, intimidation and fear.”

Ginna Bairby, Managing Editor of Unbound and Associate for Young Adult Social Witness at the PC(USA), led a workshop at the annual four-day conference, which began in 2007, called “A Gospel of Dirt” where two main questions were discussed.

“What if we really acted like we believed that God loves the world?” Bairby asked the students. “That God became flesh and dwelt among us? What might we approach—differently?”

In response to these questions Bairby says the students talked about a myriad number of topics including caring for creation, food justice, climate change, farming practices and habitat destruction.

“They also brought up how we treat and what we put in our bodies,” she says. “Body shaming, the way interact with strangers and refugees and way we treat people who are “other”— whose bodies are traditional marginalized [such as] people of color, women, LGBTQ people and those with disabilities, were also topics of conversation.” 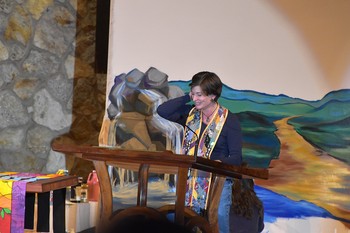 “It was good to be community with them, to give them tools to discern God’s vocational call,” says Santos, who also hosted UKirk campus ministers at the event.

“It's the largest gathering for college students in our denomination. We welcomed them, let them know they were valued and blessed them. We did a ‘wing-ding’ (chicken wings) gathering that was a whole lot of fun and had great discussion at the UKirk roundtable.”

Students from UKirk St. Louis, a new worshiping community founded in 2015, say being together with 1,139 other students left them feeling “reinvigorated” about their faith.

“It’s given me a lot of hope for the future,” says Sydney Curtis, a freshman at Washington University in St. Louis.  “My home church, a historically older congregation, has been struggling with issues of aging.  This conference has made me really happy. So many people want to be and help the world as Presbyterians.

“It’s awesome,” adds Megan Witt, a senior at Southern Illinois University.  “I don't think the church is dying; it’s changing. It’s been encouraging and uplifting to have this many young people together—during this transition time when millennials are getting older and coming into more leadership positions, learning how to run things.”

Conference preacher Carla Pratt Keyes says she was struck by how “people see John 3:16 in so many different ways.” Yet in these differences she hopes that conference participants take home one key thing.

“That God’s love is something we can’t earn or lose,” she says. “That it’s strength for us when we’re tired, or scared—and that we’re called to channel it to everyone in this world God loves.”

Presbyterian Mission Agency’s Emily Miller and Blake Collins attended the conference, having conversations with college-aged students about opportunities for services in the Young Adult Volunteer program.