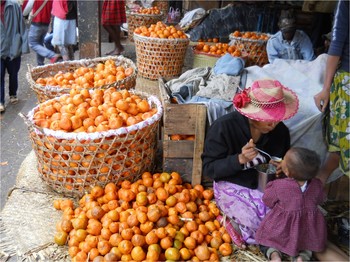 Tangerines from the village of Beambiaty in mid-western Madagascar are sold at a market in Antananarivo, Madagascar. —Rolland Razafiarison

With one of the highest rates of poverty in the world, mission co-workers Dan and Elizabeth Turk and Jan Heckler passionately believe Madagascar is a country with much to gain from PC(USA) critical global initiatives.

Madagascar’s mission co-workers are among the 150 mission co-workers, 80 Young Adult Volunteers and more than 100 global partners focusing their work around three initiatives in more than 50 countries. These initiatives include addressing the root causes of poverty, seeking reconciliation in cultures of violence and engaging more deeply in the work of international evangelism.

“Working with our partner, FJKM (the Church of Jesus Christ of Madagascar), we are advocating for long-term impact in all of these areas,” says Elizabeth Turk, who has served in Madagascar for nearly 20 years. “Sometimes it is difficult to quantify, but the quality of change is very apparent. The commitment of the church to follow in the footsteps of Christ gives immeasurable hope.”

Dan Turk’s work with seminary students weaves together the need to feed the souls and bodies of the Malagasy people. For the past eight years, he has taught seminary students how to grow vegetables and fruit trees from grafted plants—a tool for evangelism that helps the Turks connect with the people they serve.

A source of inspiration, Dan says, is Beambiaty, a community in midwestern Madagascar where people have overcome poverty by growing tangerines. The people of Antanetibe, an hour and a half north of the capital city, knew they had the same climate, soil and irrigation as Beambiaty, so they asked to be trained to grow tangerines. On the FJKM Development Department’s reforestation day in 2011, members of the FJKM helped plant tangerine trees at Antanetibe. Now 70 families have over 20 tangerine trees each. They are also experimenting with Meyer lemons and other fruit trees.

The Turks have been inspired by following and mentoring Pastor Haja Lahadinirina. He applied to attend the Ivato Seminary but was not initially accepted. Undeterred, Pastor Haja heard the seminary had an opening for a gardener. He became the seminary’s tree nursery manager and subsequently was accepted into the seminary. Now he and his wife, Iry, serve nine rural churches. Pastors Haja and Iry are not only serving congregations, but also are planting trees at their churches. Pastor Haja even learned how to graft avocado trees and has taught that skill to the people he serves. 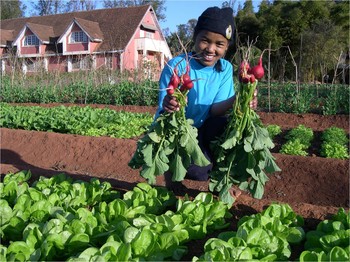 Ms. Sariaka works in the garden of the Church of Jesus Christ in Madagascar (FJKM) Ivato Seminary in Antananarivo, Madagascar, which is supported by PC(USA). —Rolland Razafiarison

Another pastor who had been trained at the seminary in innovative techniques for growing fruits and vegetables helped his community in a time of crisis. During a potato blight, it looked as if people in the village were facing starvation. The pastor helped the community grow a new crop: large sweet potato varieties that Dan had brought to Madagascar some years earlier. Growing sweet potatoes helped the village get through that time of hardship.

After graduating, most new pastors serve very rural communities. They are often recognized as the most educated people in those communities. Even if some of the people served are not Christian, they look up to pastors as leaders. Pastors can help them distinguish between what is rumor and what is real. Working with the FJKM AIDS Committee, Elizabeth Turk helps train seminary students in AIDS prevention, care and counseling.

Recognizing the scope of the challenge to address global poverty, the focus of the initial campaign is on bringing quality education to one million children by the year 2020. With input from Presbyterians across the PC(USA), along with global partners, the focus on education was chosen because extensive research has shown that quality education is the best pathway out of poverty.

In Madagascar, children attend school about five years on average; the primary school dropout rate is 65 percent. Many children are forced to leave school to support their families, and the education they do receive is inconsistent. For instance, on national exams for students completing primary and secondary education, the grades required to pass can be as low as 50 percent in some subjects.

Mission co-worker Jan Heckler, who has a long and distinguished career in education, has been working with an FJKM primary school in Ambodimita, in Antananarivo, on a test project to improve the effectiveness of teachers and students through the Evidence-Based Methods of Instruction project (EBMI). In order to be evidence-based, a practice or method must have been tested and have a record of success. The students in Ambodimita were 67 children in grades 1-3. Before EBMI, the children averaged about 60 percent correct answers on their final exams. After EBMI, the children averaged an amazing 96 percent. Currently, Heckler is focused on training trainers to prepare for a larger rollout in 2016 involving hundreds of students, if funding permits.

Heckler believes the EBMI initiative interfaces with all three critical global initiatives. The education component is clear as it is generally accepted that education is a critical tool to lift people out of poverty. She says EBMI is also an important way to spread the good news of Jesus Christ—that better learners mean more comprehensive and better recall of religious curriculum.

Reconciliation is at work as well. “Most would agree that educated people are more reasoned people,” she says. “More education generally means more effective use of a wider array of skills to resolve conflict.”

The reconciliation initiative is at work in several other ways in Madagascar. Repeated cycles of political instability and violence have contributed to the people’s dire poverty. As part of reconciliation efforts to help move beyond Madagascar’s repeated crises, the PC(USA) has walked alongside the FJKM church to speak out for justice and fairness.

Another example of its effectiveness is how the PC(USA) is accompanying the FJKM in the critical fight against human trafficking. The PC(USA) connected the FJKM with resources needed to help bring trafficked Malagasy women home from the Middle East (see Presbyterians Today, January/February 2016, “Notes from an Autopsy”). The FJKM also is working to educate and accompany women and children so they are not so vulnerable to trafficking.

You can support Dan and Elizabeth’s work in Madagascar at pcusa.org/donate/E200418.

You can support Jan Heckler’s work in Madagascar at pcusa.org/donate/E200490.

This article is from the spring 2016 issue of Mission Crossroads magazine, a publication of Presbyterian World Mission. To subscribe or read archived issues, visit pcusa.org/missioncrossroads.