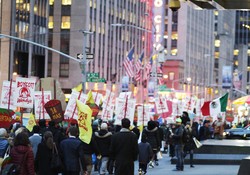 For more than 10 years, the Coalition of Immokalee Workers (CIW) has been campaigning to convince the Wendy’s Company to join the Fair Food Program (FFP), which focuses on the rights of farmworkers. But the Ohio-based fast food chain has refused to join the program even though competitors Yum Brands, McDonald’s, Burger King, and Subway have joined.

The CIW is in the midst of a multi-city tour, scheduling demonstrations at various Wendy’s Restaurants to visually raise the issue with the public and customers, ultimately convincing corporate leaders to change their minds. They started the Workers’ Voice Tour in Florida and had their first action in New York City last week, where 500 farmworkers and their allies marched in front of the offices of Wendy’s Board Chairman Nelson Peltz. It continued with a bus trip to Columbus, Ohio and a demonstration at Ohio State University.

The CIW has called for a boycott against Wendy’s because:

In a press release, the CIW states, “Wendy’s stands alone as the last of the five major U.S. fast food corporations refusing to join the Fair Food Program. By refusing to participate, Wendy’s is deriving a very real cost advantage over its competitors, while continuing to provide a market for less reputable growers.”

The Presbyterian Church (U.S.A.) has long lobbied alongside the CIW in its efforts to gain support from U.S. markets. This week, the tour stops in Louisville, Kentucky and a march on the University of Louisville campus.

“The first victory for the CIW was here in Louisville when YUM Brands signed the first Fair Food agreement with farmworkers,” said Stated Clerk Gradye Parsons. “Since then, the Campaign for Fair Food has won binding agreements with 14 large food retailers while tens of thousands of farmworkers are seeing unprecedented rights in the fields, such as shade and water, the right to file a complaint without fear of retaliation and the right to work free of sexual harassment and modern slavery.”

The FFP is a partnership between farmworkers, Florida tomato growers as well as more than a dozen major food retailers. Participating retailers agree to only purchase from suppliers who meet a worker-driven Code of Conduct, including a zero-tolerance policy for slavery and sexual harassment. In addition, retailers pay a “penny-per-pound” premium which makes its way directly to the workers. Since 2011, buyers have paid more than $20 million into the FFP.

“In addition to critical improvements in work conditions, the Fair Food Program has also brought the first significant wage increase in 30 years for farmworkers in Florida,” said Andrew Kang Bartlett, associate with the Presbyterian Hunger Program. “We celebrate the tenacity of the farmworkers as they continue to push for justice in the fields.”

Wendy’s has said it disagrees with the penny surcharge saying it’s inappropriate to pay another company’s workers. The farmworkers contend that the buyers must be responsible for workers throughout the supply chain.

Barbara Fernstrom is a member of High Mountain Presbyterian Church in Franklin, New Jersey and serves on the church’s mission committee. While in Florida several years ago, she met with CIW representatives and learned of the PC(USA)’s involvement in its campaign.

“Since then I have been to Immokalee, seen the movie “Food Chains” and spoken to CIW and Fair Food Alliance representatives,” she said. “I brought the story of their incredible work to my New Jersey congregation, where we have encouraged letters to Wendy’s and other companies who have not joined. We sent funds to CIW and this year donated to the PC(USA)’s Fair Food Program. We are looking forward to their work in New Jersey and continued support for the dignity of farmworkers.”

The final stops on the Workers’ Voice Tour will be Gainesville and Palm Beach, Florida, Peltz’ hometown.

“This tour really started with a bang. Not only did the coalition and its allies bring the fight directly to Wendy’s doorstep, but for only the second time in the long history of the Campaign for Fair Food, the CIW has called for a national boycott of Wendy’s,” said Roger Butterfield, student/Farmworker Alliance member in Tampa. “This tour shows corporate leadership that you can run from the workers all you want, but you cannot hide from your responsibility to the people who pick your food. The workers have a powerful voice and only when that voice is heard on the job can there be true justice in the fields.”

For more information on the tour, visit the Coalition of Immokalee Workers’ website or follow the Presbyterian Hunger Program.