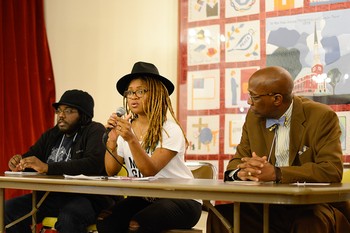 A record number of Presbyterians gathered at the New York Avenue Presbyterian Church last week to talk about some serious issues facing the U.S. and the church. But organizers behind Compassion, Peace and Justice Training Day say that’s what makes these annual gatherings so important to church members.

The theme for this year’s CPJ Day was “Lift Every Voice: Racism, Class and Power,” and it generated interest among church members, pastors and elders from New York to California. More than 200 gathered in the church sanctuary for a panel discussion on collective power and hear inspiring words from the Rev. Dr. Mark Lomax of the First Afrikan Presbyterian Church of Lithonia, Georgia.

Workshops took up issues of antiracism, workers’ rights, the Trans-Pacific Partnership and the school to prison pipeline. The lunchtime discussion drew particular interest as attendees heard from members of the Black Lives Matter movement in Washington, D.C.

Co-leader Erika Totten told the group the general public is being fed a particular image of Black Lives Matter that is not accurate and she blames the media and white supremacy for creating that image. She says the group fights oppression and some times “an act of civil disobedience” is necessary to disrupt the status quo.

“I did not grow up with an image of a white Jesus on my grandparents’ and parents’ walls,” said Totten. “There was a mural in my church that showed a black Jesus with an afro and an African emblem. On one side of him was Harriet Tubman, on the other were Malcolm X, Martin Luther King, Jr., Rosa Parks and so many others.”

Totten says her culture does not reflect what society tries to convince people it is.

“When I see God, I see a black woman, that’s the image I have and it would be a psychological trauma to accept that the God I worship looks like the people that are oppressing me,” she said. 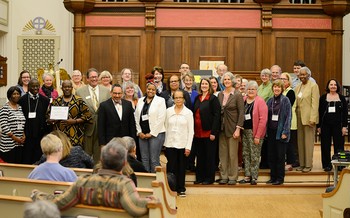 The Rev. Dr. J. Herbert Nelson, director of the Presbyterian Office of Public Witness said it is important for young people in this country to see that this is a different movement that is applicable for this time in history.

“This is not the 1960s, and we’re dealing with different realities in the issue of race. Black Lives Matter in non violent ways, is saying it won’t stand for the killing of black people,” he said. “What we see are people raising their children. They are not burning down buildings but through a sense of resistance, are refusing to be put in the boxes of yesteryear.”

Sara Lisherness, director of Compassion, Peace and Justice, said it is important for the church to be listening to and getting comfortable in talking about Black Lives Matter, asking the hard questions.

“I was so completely moved by all of the presentations from beginning to end,” she said. “The conversation about race and economics is a conversation that the entire church needs to be engaged in. My hope and prayer is that CPJ Day was just the beginning and that people who attended will be willing to continue these conversations in their own communities.”

Workshops addressed other aspects of racism including one entitled “Antiracism: Next Steps.” Presenters Alonzo Johnson, mission associate for the Presbyterian Peacemaking Program and Sera Chung, associate for race and gender justice, helped participants gain a deeper understanding of the systems of power and privilege that perpetuate racism.

“We’re dealing with a lot of dirty forks in our world today and one is racism,” says Johnson. “We’re doing this from a place of love, but today we’re dealing with the fork, and we’re going to clean it.”

Johnson says understanding racism means understanding privilege and addressing white supremacy. The concept of privilege was discussed, which includes the ideas of being first in line, having a sense of power and/or status or giving favor to one group over another. In summary, privilege was defined as one person or group having an unearned advantage.

The presenters offered several new resources for individuals or congregations to use around racism, including a new antiracism study guide and an updated church wide antiracism policy, pending 2016 General Assembly approval.

“We are a resource for you,” reminded Johnson. “We do this education together, these are systemic issues that affect us all and we’re here to help you address those issues. There is something we can do about the dirty fork.”

Johnson and Hans Hallundbaek, criminal justice coordinator for the Hudson River Presbytery, examined recidivism reduction and the struggle of inmate acclimation back into society after release in an afternoon workshop.

Hallundbaek, a self-proclaimed “recovering” businessman who now possesses more than 20 years’ experience volunteering in the prison system, presented two powerful videos to the participants. One focused on the concept of forgiveness; it came from the Rehabilitation Through the Arts (RTA) program, an inmate-focused initiative in New York’s Sing Sing maximum security prison. The RTA program is credited, in part, for reducing the prison’s recidivism, or return rate, from more than 60 percent to 43 percent. The film highlights prisoners’ involvement in a production of The Wizard of Oz, which helps inmates better cope with their situation, because “when prisoners have something meaningful to do they stay out of trouble,” noted Hallundbaek.

Another video, Voices From Within, is a gun violence piece that was the brainchild of prison superintendent Michael Capra. In it, convicted murderers were left alone in a room with only cameras to describe their experiences with guns. It’s a powerful and moving piece directed at youth in an attempt to get them to think about the consequences of gun usage and their choices.

The workshop also addressed how literacy rates are related to crime; 70 percent of prisoners fall into the lowest two levels of reading proficiency.

“I’m particularly heartened by the fact that attendance was strong. As a first time participant, I was impressed by the diversity of the attendees ethnically and generationally,” he said. “I think those that attended were impressed by the quality of the presentations that were made in both plenaries and workshops.”

The Rev. Mark Koenig, director of the Presbyterian Ministry at the United Nations said CPJ Day was a marvelous mix of first time participants as well as those who have attended on a regular basis.

“It was an energizing and equipping event that included analysis of the ways race, class and power distort God’s intentions,” he said. “It provided people with the tools to make God’s vision of justice and righteousness a reality.”

Compassion, Peace and Justice ministries receive 90 percent of its support from three of the four Special Offerings: One Great Hour of Sharing, Pentecost Offering and the Peace and Global Witness Offering. Please support the work of CPJ Day through giving to Special Offerings or consider becoming a Pillar of the Church.