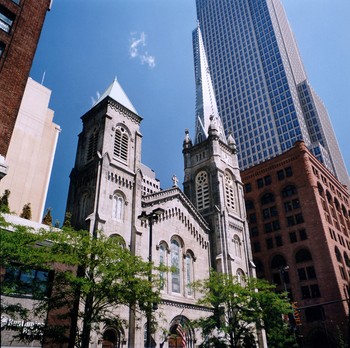 Old Stone Church, long a downtown Cleveland landmark, dates back to 1820. It’s presence on the Public Square makes the church a focal point for events of community importance. —Courtesy of Old Stone Churh

The following article was originally printed in the May/June 2016 issue, "Greening our Cities," of Presbyterians Today.

If there’s one thing we Clevelanders love to do, it’s grumble. We gripe and grouse about our lake-effect snow with Shakespearean eloquence. We make sport of our losing Browns with an indecorous humor that would make a sailor blush. But one of the things we complain about most—the weather, specifically the powerful wind that howls from the Great Lake at our doorsteps—may provide a truly big win for Northeast Ohio in the near future and help Greater Cleveland live up to its moniker, “Green City on a Blue Lake.”

Cleveland’s oldest Presbyterian church is showing the city that congregations, businesses, and individuals don’t have to wait to start using the power of the wind; there’s an easy and cost-effective way of doing it right now.

Almost six months before Fred.Olsen Renewables, an Oslo-based energy producer, announced in December 2015 that it was partnering with the nonprofit Lake Erie Energy Development Co. to build a $120 million offshore wind farm near Cleveland, that city’s historic Old Stone Church (First Presbyterian) decided to go clean and green by switching from nonrenewable sourced energy to wind. It hopes other congregations will follow suit.

In this age of coal-burned, natural-gas, and nuclear-generated energy, it’s easy to forget that when the first Cleveland settlers, Rebecca and Lorenzo Carter, joined 14 other Presbyterians and founded First Presbyterian Church in 1820, use of electricity for common consumption was unheard of. Even in 1855, when the current building was completed, the church was lit by skylight and candle. Heat came from a coal burner. Amplified sound came from an acoustically designed sanctuary and from preachers who knew how to speak up.

With that in mind, a member of our board of directors—a semiretired lawyer with strong convictions about eco-justice—suggested the idea of wind power for our 160-year-old building. When the board discovered how easy it would be to purchase wind-generated electricity, there was little debate about moving forward. And for Presbyterians concerned about leaving the legacy of a healthy earth for our children’s children, it was well worth the small expense and the even smaller amount of effort to make the switch.

Admittedly, we were relieved when we discovered that we didn’t need to affix a windmill to the roof of the church—although it might have made quite a statement to the towering office buildings surrounding us. Nor did we need to upgrade our existing electrical system. There was a much simpler solution available to us.

Old Stone partnered with Arcadia Power, one of many renewable energy certificate (REC) providers—companies that source wind energy from third-party wind farms in other parts of the country and pool it in the electrical grid. By partnering with a REC (pronounced “rek”) provider, an equal amount of the electricity we draw from the grid is replenished with 100 percent wind-generated electricity.

There’s even better news. Our current utilities provider still delivers power to us in a conventional way; no system conversion was necessary.

As a result of little effort, our congregation is now also helping the US Department of Energy achieve its goal of having 20 percent of the US electrical supply sourced from wind by 2030.

If your congregation is considering something similar, just make sure that the company you partner with is legitimate. Research “green power partnerships” through the Environmental Protection Agency or check out green-e.org, an independent consumer protection program specializing in the sale of renewable energy.

Be prepared, though; there is a slight increase in expense with RECs. For Old Stone Church, the monthly cost for wind is about 2.5 percent higher than before. However, as more people participate, not only will the amount of renewable energy in the grid increase, pushing us ever closer to that 20 percent target, prices will come down, too.

Driving prices down may be where a grassroots movement of small organizations, churches, and individuals can help larger corporations, eventually, make the switch, as well. I recently discussed RECs with a development colleague who manages a skyscraper in downtown Cleveland. While she is a good steward and very supportive, she says that for her building, just a 2.5 percent increase alone could run into hundreds of thousands of dollars per year. For us, as a church, the increase is a little easier to absorb at less than $750 per year.

In the meantime, the way we see it, participating in a REC program is a small but very good investment in healthy, sustainable, and just communities and in the future of God’s very good earth. And for faithful Clevelanders, that should be nothing to grumble about.

Mark Giuliano is an urban pastor actively engaged in sustainable development and the senior pastor of Old Stone Church (First Presbyterian) in Cleveland.