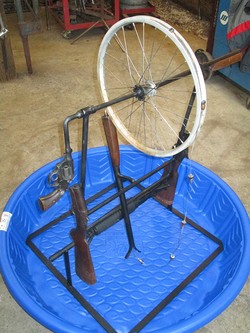 The ancient biblical vision of turning swords into plowshares and spears into pruning hooks has stirred the modern-day imagination of Columbia Presbyterian Church in Decatur, Georgia.

Like the prophet Isaiah, the people of Columbia envision a world where devices associated with death are turned into implements that give life. They collected guns from among themselves and the surrounding community and took them to a local artistic blacksmith, who used them to forge a working rope pump that can lift water from wells.

The pump calls attention to gun violence, and it is the centerpiece of a fundraising effort aimed at purchasing African-made pumps that will be used in Malawi, where thousands of people lack access to safe drinking water.

“It’s not so much an anti-gun campaign we’re trying to launch, but to use the pump itself as a symbol to bring folks to the table to begin some dialogue,” says the Rev. Tom Hagood, Columbia’s pastor. “We really believe there are good people on both sides of the issue, and we think there are some common-sense laws that could be put into place to curb some of the access to guns.”

At the same time gun-related deaths are rising in the United States, children around the world are dying from a lack of safe drinking water, he observes. “We just thought it would really show what swords into plowshares is really all about.”

The pump made its public debut May 21 on the steps of the Presbyterian Center in Louisville at a gathering sponsored by the Presbyterian Mission Agency and Mid Kentucky Presbytery. While the National Rifle Association (NRA) met just a few miles away, Presbyterians and others sang, prayed and gave testimony to the impact of guns on their lives. It was one of several events in Louisville that day held by religious and social justice groups in response to the NRA’s annual meeting.

The pump has now returned to Decatur and will be displayed around the community as a symbol of the congregation’s conviction that there are too many gun deaths and too few resources devoted to saving lives around the world. Hagood envisions holding dinners and other events that will showcase the pump and invite people to give money to buy pumps for Malawi. 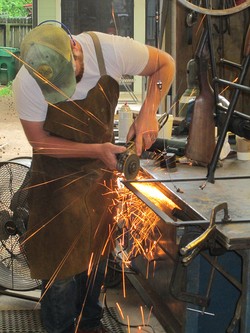 “We are trying to address the gun issue by saying ‘enough is enough’ and then do something positive,” Hagood says. The congregation is promoting the effort within the Greater Atlanta Presbytery and through area media

Columbia’s concern about gun violence was heightened after viewing the award-winning documentary Trigger, produced by Presbyterian Disaster Assistance, Hagood says. “Honestly, I think there was a lot of frustration in the congregation around what we could do.”

The idea for addressing gun violence and the need for water in Malawi simultaneously came about during a conversation between Hagood and Presbyterian mission co-worker Jim McGill. McGill and his wife, Jodi, have worked with Malawian partners for more than 25 years to bring safe drinking water to Malawi, and they are attending Columbia while on interpretation assignment in the United States.

Hagood approached his neighbor Jason Smith, an artistic blacksmith, about crafting the pump. He agreed to make the pump at no charge.

“I guess what resonated with me is that I’m a family man with two small children and a wife, and I like several others, felt the pain of gun violence and mass shootings, which have been increasing over the years,” Smith says.

McGill furnished him a model of a rope pump that is commonly used a Malawi. The model guided Smith as he made the pump with metal from an AR 15 rifle, a .38 caliber handgun, and two single-barrel shotguns. A wheel from a baby stroller is also part of the design.

Hagood says other artistic blacksmiths may be recruited to make additional pumps. Eventually, he notes, the pumps could be sold at auction with the proceeds going to buy pumps for Malawi.

In Malawi, more people die from water-related diseases like typhoid, cholera, and hepatitis A than from AIDS. In recent years, erratic rainfall and flooding have added to Malawi’s challenges. Crop yields are down significantly, and many have been left without a reliable source of nutritious food. Rope pumps can help mitigate both of these problems by providing safe water for Malawian families and irrigated water for their crops.

“If we can prevent one death and help a village get water, it’s worth our effort,” Hagood stresses.

To give to the guns to pumps project, click here and write “guns to pumps” in the comments.