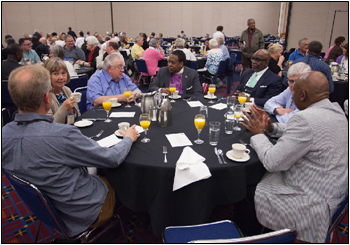 As a principal author of the Confession of Belhar, Allan Boesak brings a truly unique perspective to the 222nd General Assembly (2016), which voted Wednesday to include the document in the denomination’s Book of Confessions.

Belhar “is a confession that stirs us, humbles us, and inspires us … It’s a unifying document,”

“We cannot yet foresee the consequences of the Confession,” he said. “No other Confession has been so clear in its intentions: not only unity, but its foundationality; not just reconciliation, but its inescapability; not only justice, but its indivisibility.”

Noting that the church’s Confession of 1967 was adopted the last time the Presbyterian Church (U.S.A.) met in Portland, he said, “What this Portland assembly will be known for is the adoption of [Belhar].”

“Today is a defining moment for the PC(USA), as it was for the Dutch Reformed Mission Church (DRMC) 30 years ago as we finally adopted the Belhar Confession,” Boesak said.

“But the  defining  moment  was  not  just  the  adoption  of  the confession, as stunning as it was,” he added. “In the years between 1982 and 1986, my friend and colleague and co-author Jaap Durand offered crucial prophetic insights that inspired and haunted the church in ways we couldn’t imagine in 1982, saying, ‘A  confession does not and cannot engage in mere trivialities.   It can only be an extension of the ancient confession that Christ is Lord… I’m convinced that the Confession of Belhar will outlive apartheid and the heresy that formed  it.’”

The assembly voted Wednesday on a recommendation from  its committee on Ecumenical and Interfaith Relations to include Belhar in the Book of Confessions.

Recalling the struggles of black South Africans to remain faithful and pursue unity in light of terrible oppression, mass detention and cruel policies, Bosack said: “The church became directly involved in the efforts of freedom and justice in South Africa. The Jesus we worship and confess as Lord in the sanctuary is the Jesus we take into the street. Our people were slaughtered. Everyone was touched in one way or another.”

“By 1986 we saw no sense in, and had no desire for, unity with the white church, or with white people in general,” he said of the general despair that afflicted the Dutch Reformed Missionary Church. “But we had Belhar, and Belhar understood Calvin as he spoke of Holy Communion. ‘Christ has only one body of which he makes us all partakers.’”

Calling the unity of the church both a gift and command, Boesak said it was difficult to find points of unity or reconciliation with those who were actively opposing the rights of black South Africans.

“Belhar understood from Isaiah that God is not only a God of justice, but that God is a God of indivisible justice,” he said. “So against our self-absorbed instinct for self-absorbed victimhood, the black church confessed God as a God who wants to bring forth peace and justice in the world, and that God calls the church to follow in this, that the church must stand next to people in any form of need or injustice.”

Recalling the challenge the DRMC experienced in affirming the rights of LGBTQI people, Boesak asked if his denomination was “ready to face the consequences, not only with the white Dutch Reformed Church, but within itself?”

“In following Christ, the church must fight against those who use their privilege to oppress and put down any people,” he said. In asking the PC(USA) to “witness against any form of injustice,” Boesak turned his attention to Palestine, asking the denomination to support the boycott, divestment and sanctions movement – similar to those used to end apartheid – to place economic pressure on Israel to end the occupation and expansion of territories.

“Kairos Palestine is a cry from the heart of suffering,” he said. “Unless it rolls down for Palestinians, it will not roll down for others. Indivisible. Do justice, love mercy and walk humbly with our God.”

In conclusion, Boesak said of Belhar and its broader implications: “It is a confession that stirs us, humbles us, and inspires us … It’s a unifying document.”