Passage spurs spontaneous chorus of ‘We Shall Overcome’ 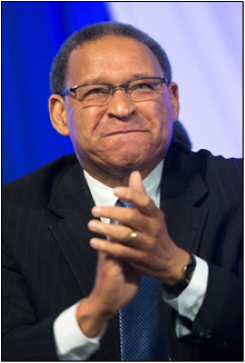 Fifty years after it was birthed in South Africa by the Dutch Reformed Mission Church during its battle against apartheid, the Confession of Belhar has been included in the Book of Confessions of the Presbyterian Church(U.S.A.), a majority-white mainline American denomination.

After a four-year-long process of study and periodic votes, the 222nd General Assembly (2016) voted overwhelmingly Wednesday to make Belhar the denomination’s 12th recognized confession, the first originating in the global south. The historic moment was greeted with tears of joy by many in the Oregon Convention Center, including Allan Boesak, a co-author of Belhar who was moderator of the DRMC when it was adopted.

“What a night, what a night,” Boesak exulted. “I thank God for your affirmation of this confession tonight. I praise God tonight for the things we did not know [when the confession was adopted in 1986], but are blessed to see.”

This is the denomination’s second- go-round with Belhar, which originally was proposed for adoption in 2008 by the Task Force on Reparations. The previous effort failed in 2010 when the confession was approved by a majority of the presbyteries, but failed to reach the required two-thirds    threshold. The second process began at the 220th General Assembly (2012), then was sent to presbyteries again after the 221st General Assembly (2014), receiving 84 percent approval.

The final recommendation for approval came to the assembly from the Ecumenical and Interfaith Committee.

A visibly emotional Co-Moderator Jan Edmiston called for commissioners to vote, and when the 540-33 vote flashed on the screen, commissioners erupted in a standing ovation as the worship team led the assembly in the song, “Oh Freedom.”

Holding back tears, Godfrey Betha of the United Reformed Church in Southern Africa was invited to speak after the vote and said: “It is important to seek solidarity with South Africa. We’ve come a long way with the PC(USA). We are grateful to have you as partners in service to the Lord. Today we offer gratitude, we salute you as the PC(USA) for your historic decision to adopt the Belhar Confession as a standard of faith for your church. I bow in humility to God and thankfulness to you … I’ll never forget this date.”

Boesak then stepped to the podium.

At that point the commissioners linked hands throughout the plenary hall and spontaneously broke into “We Shall Overcome,” led by Co- Moderator Denise Anderson.

Other  assembly  actions  on recommendations from the committee are available on PC-Biz at https://www.pc-biz.org/#/committee/565/business.