MLK Weekend: A Call to Action 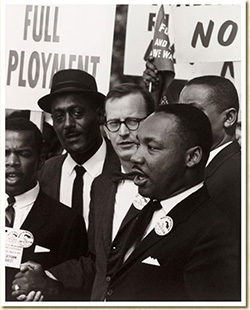 At the time of his death, Dr. King was engaged in what was known as the Poor People’s Campaign. Having discerned a shift from “the era of civil rights to the era of human rights,” Dr. King had begun organizing toward a campaign and a new march on Washington consisting of poor people from across the country of all races and ethnicities. The march, according to the Reverend Dr. Ralph Abernathy, was designed to “dramatize the plight of America’s poor of all races and make very clear that they are sick and tired of waiting for a better life.” Integral to the campaign was Dr. King’s alliance with sanitation workers in Memphis, Tennessee, who were demonstrating for equal pay. It was during one of two trips to Memphis in support of those workers that Dr. King was assassinated.

As much as anything else for which he is known, the fight for economic justice is Dr. King’s unfinished agenda.

At the 222nd General Assembly (2016), the Presbyterian Church (U.S.A.) affirmed our commitment to stand in solidarity with the poor when we approved Item 11-03, “On Choosing to Be a Church Committed to the Gospel of Matthew 25,” from the Presbytery of the Cascades. This overture calls the PC(USA) to “Recommit ourselves at the congregational level, the mid council level, and the national levels of our church to locate ourselves with the poor, to advocate with all of our voice for the poor, and to seek opportunities to take risks for and with the poor ...” (Minutes, 2016, Part I, p. 700 of the electronic copy). It must also be noted that we are approximately one year away from the 50th anniversary of both the Poor People’s Campaign and Dr. King’s assassination. The hour for jubilee is near.

On this Martin Luther King Jr. Day weekend, and with more than a year left before this milestone anniversary, we encourage anew the members of the Presbyterian Church (U.S.A.) to commit ourselves to poverty alleviation and economic justice in our communities, our nation, and the world. We ask you to resist platitudes about what Dr. King stood for or what this holiday means, and commit (and recommit) to using our social, political, material, and spiritual capital to eradicate poverty. We remember the words of Dr. King, who reminded us that “there is no deficit in human resources; the deficit is in human will” (Dr. Martin Luther King Jr., Nobel Lecture, December 11, 1964).

As Co-Moderators, we are excited to be working in partnership with Kairos: the Center for Religion, Rights and Social Justice; Auburn Theological Seminary; and other entities to help equip and resource our denomination for anti-poverty work in a variety of contexts. We are clear, however, that we are not being called to mere charity, but to partnership. We take our cues from Christ’s own words in Matthew 25:40, in which he identifies those we would call “the least of these” as “my [siblings].” A new Poor People’s Campaign (PPC) will necessarily be fronted and led by the poor, many of whom are us. The PC(USA)’s membership consists of people on all points of the economic spectrum. Many of our most faithful members fall at or below the poverty line, are food insecure, or rely on public assistance even with full-time employment. We stand with those who are not only Jesus’ siblings, but our own.

This MLK weekend, people around the country will be calling for a new Poor People’s Campaign to continue the work of doing (economic) justice. From the PPC team, here is how you can participate: