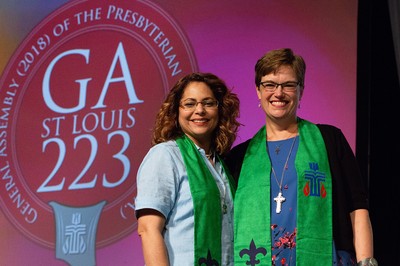 After the close of its meeting in St. Louis, Missouri, the 223rd General Assembly tasked the Co-Moderators, Elder Vilmarie Cintrón-Olivieri and the Rev. Cindy Kohlmann with appointing the membership of 14 special committees, commissions, and task forces. Some committees were established or expanded by the 2016 and 2018 General Assemblies in response to recommendations to commissioners from various sources.

The Assembly approved financial implications for the work of these special entities, for the most part, beginning in 2019 through 2020 when reports will be brought to the 224th General Assembly (2020).

Presbyterians were invited to consider a call to service and apply via an online application form to be considered for appointment by the Co-Moderators.  Hundreds of Presbyterians responded to the call, taking time to reflect about the nature of the work and necessary gifts, experience, and skills need for each special committee, commission, or task force.

“We’re so grateful for the gifted and faithful people who continue to offer their time and talent to serve the PC(USA),” said Kohlmann.  “Thank you!”

The Co-Moderators have completed appointments for two special entities – the Racism, Truth, and Reconciliation Special Committee and the Moving Forward Implementation Commission.

The Racism, Truth, and Reconciliation Special Committee is “charged with conducting a churchwide listening campaign to hear the voices of peoples long silenced regarding the state of institutional racism and oppression within our church.”

Members of the special committee are:

The Co--Moderators have appointed the members of the Moving Forward Implementation Commission with the mandate and authority to:

Members of the commission are:

“We are working purposely and diligently on it, praying, committed to diversity in all its forms,” said Cintrón-Olivieri, about the appointment process.  “The GA Nominating Committee and the GA Committee on Representation are helping with this,” noting the Manual of the General Assembly’s mandate to collaborate with these two committees of the General Assembly.

Co-Moderators Cintrón-Olivieri and Kohlmann will continue their discernment and appointment process when they are in Louisville for the Moderators’ Conference beginning November 15.

A full membership listing of the Truth and Reconciliation Committee and Moving Forward Commission and their demographics is available online.