‘Showing people God by our action’ 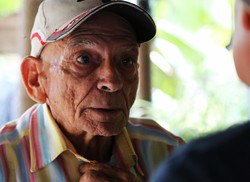 Abel Perviez says he talked to God and asked for 19 more years to complete his life’s work. He started the Presbyterian mission in this tiny town dominated by a large sugar mill in January 2015 with just six worshipers. The mission is now up to 30 members and is still growing.

There is no neon sign, no message board with pithy phrases, and no tall steeple with a cross on top to mark the Jatibonico Mission. To locate it, visitors from nearby Sancti Spiritus – home base for the Presbyterian Reformed Church in Cuba (IPRC) congregation that sponsors the Jatibonico Mission – have to use what the Rev. Edelberto Valdes, the IPRC’s general secretary, calls “the Cuban GPS” (asking directions from a string of local residents).

A deeply rutted dirt road off the main highway takes one into a community of simple dwellings and to Perviez’s small house. The mission site is a small patio with a corrugated tin roof that lets in plenty of water when the spring rains arrive. Simple benches are piled up in one corner, to be pulled out and arranged when a service is scheduled or visitors come. There is even a portable pulpit. The mission is permanently inhabited by a flock of scrawny, noisy chickens. 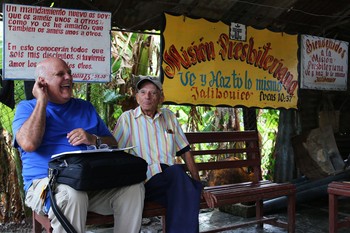 The Rev. Edelberto Valdes, general secretary of the IPRC, shares a laugh with Abel Perviez, founder of the Jatibonico Mission. —Photo by Randy Hobson

A large sign nailed to a post that helps hold up the roof proclaims the site as an IPRC mission and bears a likeness of the Presbyterian Church (U.S.A.) seal. “When I was in Miami in 2003, someone there gave me a T-shirt with the Presbyterian seal on it and I liked it, so when we started our mission we made one ourselves,” Perviez says.

The calling of the Jatibonico Mission is simple. “A church that does not serve is nothing,” Perviez says. “Our real theology is feeding the hungry and healing the sick. You don’t educate people by talking, but by doing.”

Perviez went to Miami in 2003 to learn more about smoking meat, which is his livelihood: a large brick oven commands one large corner of the mission. While on that trip, he asked many people why they hate churches. “They said, ‘Churches do nothing, they only talk,’” he recalls. “So we determined, when we started this mission, that we were going to do things.”

They started by helping a woman in the community replace many of her kitchen goods after a fire destroyed part of her house. They use the fruits of Perviez’s meat-smoking operation to help feed the community. Through the Sancti Spiritus congregation, Perviez has established strong connections with the city’s hospitals to help provide medical care to Jatibonico’s isolated residents. 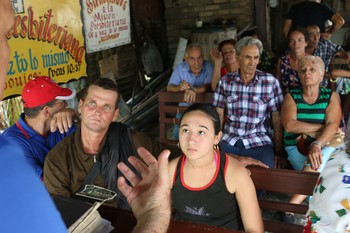 Members of the Jatibonico Mission at worship. —Photo by Randy Hobson

“We don’t talk so much about God,” says Perviez somewhat disingenuously. (He is a fine preacher despite no formal theological training.) “We show [people] God by our action.”

About 20 members of the mission show up to welcome a visiting delegation. Among the visitors are two leaders of the Presbyterian Reformed Church in Cuba, who engage in extensive conversations with the Jatibonico members about how the IPRC can be more supportive.

A young man named Andermi says he was first brought to the Jatibonico Mission by his mother-in-law. “I have attended churches all my life, but this is the first time I have a church life,” he says, “because the people here do what the Bible says to do.”

Perviez says a Cuban pastor recently asked him how a mission can do so much when “it’s not even a church.” Abel says he replied: “There is no special mark on the church. It is serving the people that is the special mark we have here.”

Elderly member Evangelina says she used to attend another church, “but the pastor ran away. I was walking by here and heard the pastor (Perviez) and said, ‘This is my place.’”

Being Presbyterian is very important to Perviez and to the members of the mission. “There is a super big difference between Presbyterians and other churches,” Andermi says. “We address spiritual needs, yes, but every other need, too.”

Perviez adds, “We are grateful for the spiritual support we receive from the IPRC and because they bring us into contact with visitors from the PC(USA).”

At Jatibonico Mission, a simple typewritten sign tacked to the pulpit reads: “When you feel like you don’t have the strength to stay standing, fall on your knees.” Perviez hopes God will give him those 19 more years, for there is still much to do. “We are here,” he says, “because the Presbyterians must be where the poor live.” 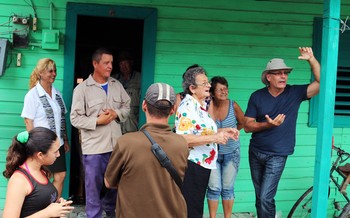 A delegation sponsored by the PC(USA) Office of the General Assembly (OGA) visited Cuba May 3–11. Members of the delegation included the Rev. Jerry Van Marter, interim director of communcations for OGA; Randy Hobson, the OGA’s photographer/videographer; Frederick Tangeman, director of communications and marketing for the Presbyterian Historical Society; and the Rev. Byron Bland, a member of San Jose Presbytery who is an international conflict resolution expert at Stanford University. They were accompanied by the Rev. Jo Ella Holman, regional liaison for the Caribbean (including Cuba) for Presbyterian World Mission; the Rev. Edelberto Valdes, pastor of the Presbyterian Church in Caibarién, Cuba, and general secretary of the Presbyterian Reformed Church in Cuba (IPRC); and the Rev. Ary Fernandez, pastor of Central Presbyterian Church in Matanzas, Cuba, and moderator of the IPRC 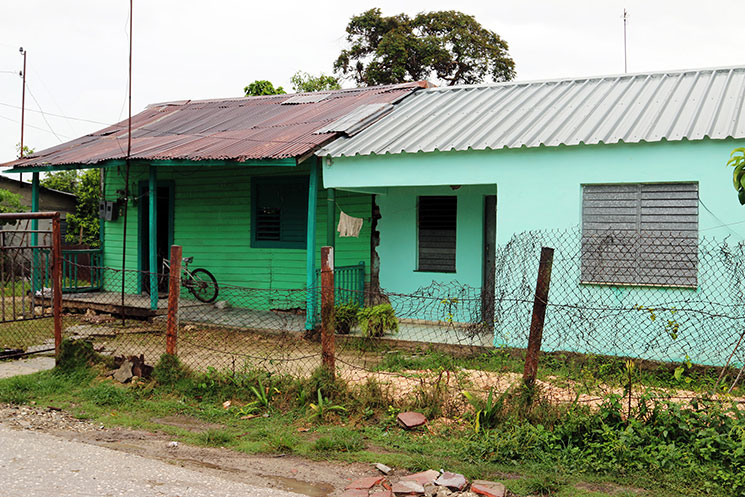 The modest home of Abel Perviez (green house on the left) serves as the sanctuary for the Jatibonico Mission. - Photo by Randy Hobson