Manati Mission ministers to variety of social ills … and mosquitos

Jerry Van Marter | Office of the General Assembly Communications - May 24, 2018 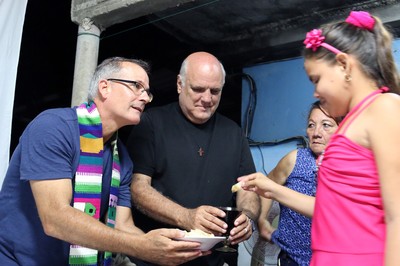 MANATI, Cuba – The mosquitos outnumber – by about a thousand to one – the 40 Presbyterians gathered for worship on a hot, humid Wednesday evening at the Presbyterian Mission at Manati. But the worshipers seemingly care not a whit about the cloud of annoying insects. They are overjoyed that leaders of the Presbyterian Reformed Church in Cuba (IPRC) have come for a rare visit.

Like most of the IPRC’s missions in eastern Cuba, Manati is very isolated – at the end of a teeth-rattling, bone-jarring road that winds for 40 kilometers through lush countryside from Camaguey, the nearest city of any size. On the road to Manati (it takes more than three hours to drive the 25 miles from Camaguey), we see more horses, cattle and even pigs than cars. The only sign of modernity out here is a single railroad track – until, on the outskirts of town, we spot a large field of solar panels.

As at many of the IPRC missions out here in the countryside, the worship space is a large stone patio in back of a modest house. Two or three benches have been set out – a couple have backs but some are just planks. There are also an assortment of plastic lawn or beach chairs. Images representing the Presbyterian Mission at Manati are plastered on a sheet attached to a line with weatherbeaten clothespins. A simple wooden cross is suspended on a wire, hung on a nail in one of the posts that supports the corrugated tin roof. 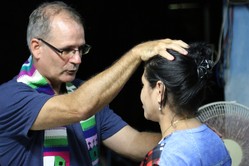 Ary Fernandez baptizes a new member of the Presbyterian Mission at Manati. —Photo by Randy Hobson 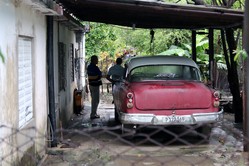 Before worship at the Presbyterian Mission at Manati, some men engage in a little car talk. —Photo by Randy Hobson

The midweek service has drawn about 30 people, two-thirds of them children and teenagers. On Sunday mornings, the congregation meets in two houses because one patio is not large enough to hold them all. Adults meet at one house, and the children and youth gather at another for Christian education and music activities.

Because the presence of pastors is so rare, the Manati mission members have prepared for adult baptisms and the sacrament of the Lord’s Supper, both conducted by the Rev. Ary Fernandez, pastor of Central Presbyterian Church in Matanzas, Cuba, and moderator of the IPRC. 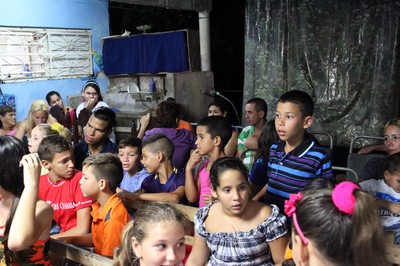 Children make up a large part of congregation at Manati. —Photo by Randy Hobson

And food. Every service at the Presbyterian Mission at Manati includes a simple meal.

As on all the visits to these remote IPRC Presbyterian missions, Fernandez and the Rev. Edelberto Valdes, the IPRC’s general secretary, engage the congregation in conversation after the service. They talk about the issues facing the congregation and community and their hopes, dreams, and needs for the future. The litany of social issues is the same wherever we go: alcoholism, teenage pregnancy and unemployment.

The conversation here is rather short, however. It seems that even the Presbyterians of Manati finally cannot compete any longer with the mosquitos. 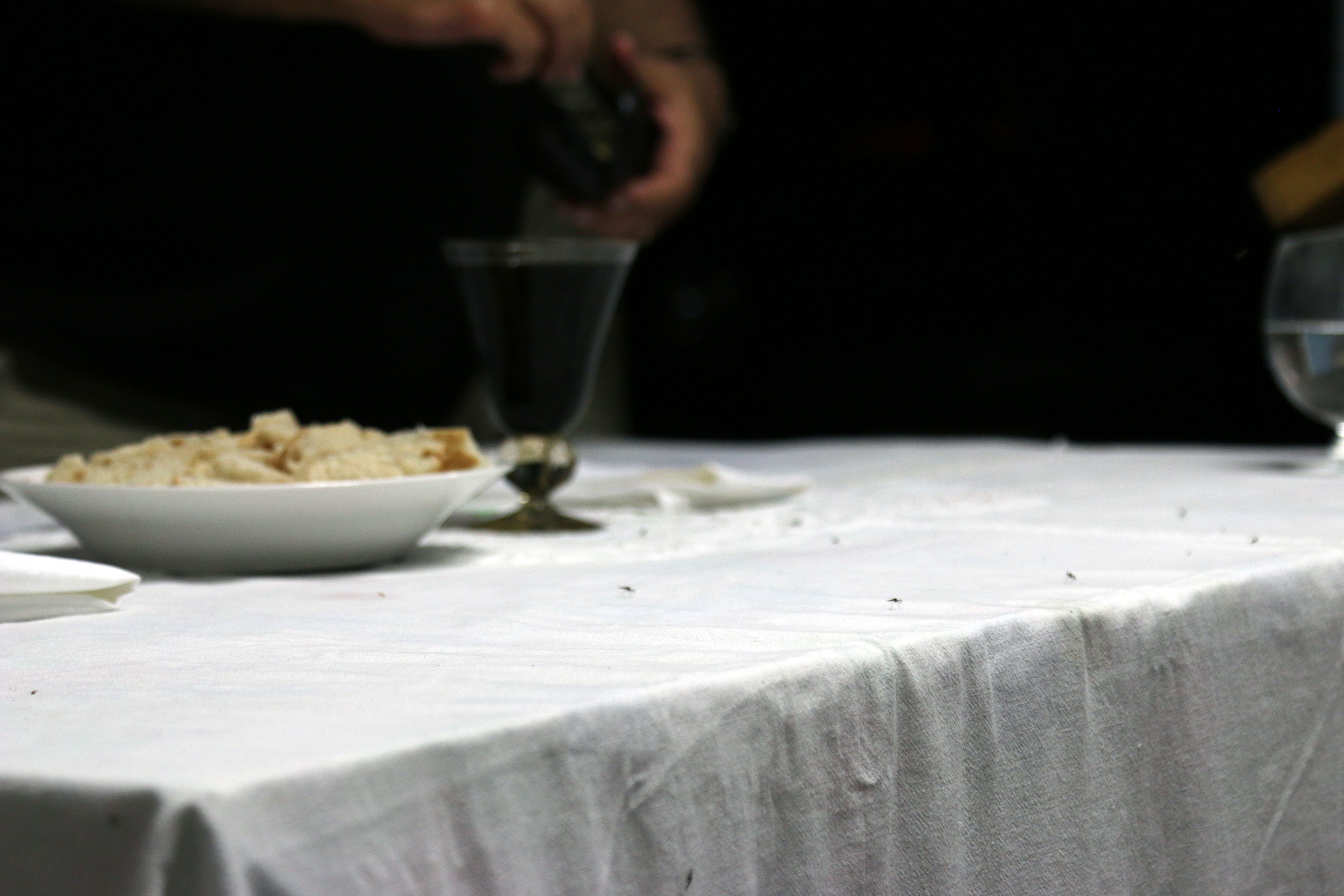 Mosquitos, presumably Presbyterian, prepare for communion at the Presbyterian Mission at Manati. - Photo by Randy Hobson

A delegation sponsored by the PC(USA) Office of the General Assembly (OGA) visited Cuba May 3–11. Members of the delegation included the Rev. Jerry Van Marter, interim director of communications for OGA; Randy Hobson, the OGA’s photographer/videographer; Frederick Tangeman, director of communications and marketing for the Presbyterian Historical Society; and the Rev. Byron Bland, a member of San Jose Presbytery who is an international conflict resolution expert at Stanford University. They were accompanied by the Rev. Jo Ella Holman, regional liaison for the Caribbean (including Cuba) for Presbyterian World Mission; the Rev. Edelberto Valdes, pastor of the Presbyterian Church in Caibarién, Cuba, and general secretary of the Presbyterian Reformed Church in Cuba (IPRC); and the Rev. Ary Fernandez, pastor of Central Presbyterian Church in Matanzas, Cuba, and moderator of the IPRC.