Faced with the challenge of cancer, veteran GA musician Chip Andrus plays on

Those who arrive early for plenary sessions have the opportunity to listen and sing along with the Rev. Chip Andrus, a fixture on the Presbyterian Church (U.S.A.) General Assembly stage since 2001. This year, the bearded and bandana-clad Andrus has caught the attention of Young Adult Advisory Delegates, who have been overheard clamoring for “Willie Nelson’s autograph.”

What some may not know is that Andrus comes to this Assembly facing the daunting challenge of advanced-stage cancer. After eight years in remission, he was diagnosed last November with metastatic melanoma. Since the first of the year, he has undergone a battery of treatments, with mixed results.

But Andrus was determined to come to St. Louis. And with the help of friends in the Office of the General Assembly and a supportive team of musicians, he is here singing and playing his guitar, despite numbness in his right hand caused by more than 20 tumors in his brain.

“I had to learn how to play the guitar with the numbness, how to strum without dropping it,” he says. 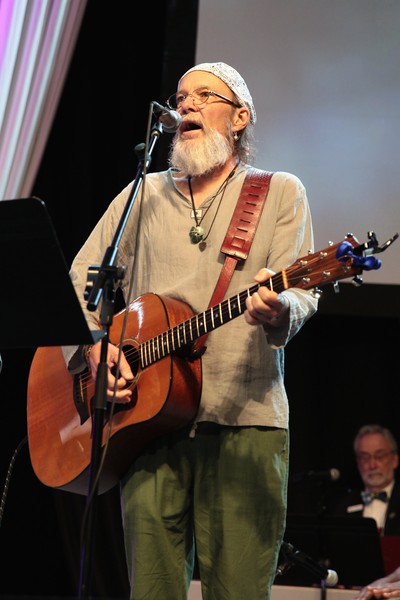 Asked what brings him back Assembly after Assembly, Andrus says, “I just love being here, being with the family. I love (Stated Clerk) J. Herbert Nelson’s idea of the ‘kindom.’ This is where the real family gets together – the ones you like and don’t like – and hash things out.”

After stops in Louisville and Harrison, Ark., Andrus is currently pastor of South Salem Presbyterian Church, in a small hamlet north of New York City. He leads session meetings at the Horse and Hound, a tavern across the street from the church, where he and a couple of musician friends also have regular musical gigs.

While working in the PC(USA)’s Office of Theology and Worship in Louisville, Ky., in the early 2000s, he performed with a group of other theologian/musicians under the moniker Soul Highway. At General Assemblies, Andrus plays with a core group of about five people, pulling in commissioners and others with musical skills “to accentuate the diversity of the church.”

He finds music to be a powerful tool for bringing people together. “Music evokes so much in everybody – joy, sadness, healing, laughter,” he says. “At the Assembly, we play music so all voices can be together. It’s not just individual voices, it’s family singing together.”

When Andrus first received his cancer diagnosis, he and his wife, Linda, who is manager of an animal hospital in South Salem and Danbury, N.Y., did not tell very many people. “When I finally told the church and the wider community, it was amazing to experience the outpouring of support,” he says.

“People have rallied around. And God is powerfully present in that. The love of God is manifest through human beings. That’s the story of the Bible.”

Making it to St. Louis has strengthened Andrus’s conviction that he’ll sing and play on stage again at future church gatherings – including the 224th General Assembly (2020) in Baltimore.

As he puts it, “I’ve got cancer. Cancer doesn’t have me.”