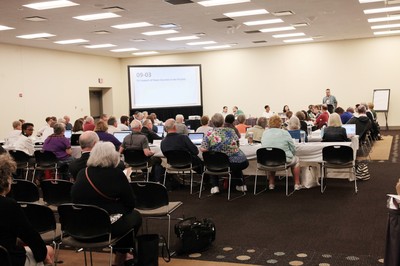 The Assembly Committee on Peacemaking, Immigration, and International Issues met Monday to discuss matters involving North Korea, from the nature of its concentration camps to properties the Presbyterian Church (U.S.A.) bought in North Korea during the Korean War 60 years ago.

Item 09-12 urged the PC(USA) and individual churches to create a seven-member task force to “make recommendations to the 224th General Assembly in 2020 to suggest positive improvements to the sensitive issues embedded in the Korean peace process.”

Among other things, they want the church to collaborate with other ministries to “rescue and bring relief to the North Korean refugees who are displaced in neighboring communities.”

During the public part of the meeting, Laurel Underwood, an observer at GA and a pastor, said her family had served in Korea for four generations. “We know what happens to the politically unwanted in North Korea,” she said.

Jon Shu, a teaching elder from Chicago Presbytery, spoke in support of the overture. “I love my native land, and I’m all for unification,” she said. She noted that South Korea admits about 1,500 refugees a year from North Korea, and an estimated 30,000 are in China.

“When refugees are returned (to North Korea),” she said, “they are sent to the firing squad or the concentration camps.” She added, “People on the whole don’t know about the plight of those from North Korea.

Sung Joo spoke during the overture advocate portion of the meeting, asking, “Can we have peace without justice?”

“Whenever (people in North Korean concentration camps) find a rat or a cockroach, it’s an exciting day,” he said. “At least they have some meat.” As sympathetic murmurs rolled through the room, he added: People die in these camps. Women are raped.”

Dave Carver, a pastor from Pittsburgh Presbytery, spoke about a children’s choir in a refugee camp in South Sudan that performed a song about what it was like to be hunted. Their message of hope was that people could kill them, but could not kill them all.