Prospects for lasting peace in Korea?

Nan Kim: ‘None of this was remotely imaginable’ 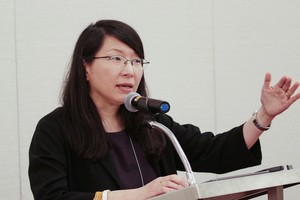 In January, Nan Kim of the University of Wisconsin-Milwaukee accepted an invitation to keynote the June 18 General Assembly luncheon sponsored by the Presbyterian Peace Network for Korea (PPNK). An associate professor of history, Kim is the author of Memory, Reconciliation, and Reunions in South Korea: Crossing the Divide (2016).

At the start of this year, Kim planned her remarks in the context of tensions among the North and South Korean governments and the United States. It did not occur to her that she would be speaking months later in the aftermath of an Inter-Korea Summit between leaders of South and North Korea on April 27, much less the first-ever meeting of the head of North Korea’s government with the US president on June 12.

“None of this was remotely imaginable,” Kim said to her lunch audience.

While polls show that most South Koreans support an international treaty to end the Korean conflict of the 1950s, many voices in Western media react with hesitation, skepticism or alarm.

It is a challenge, Kim observes, to see beyond personalities of national leaders and to appreciate the insights, experiences and yearnings of those people directly affected on the Korean peninsula. She hopes that today’s atmosphere may lead to more people-to-people exchanges between North and South, to deeper understanding of the historical and cultural ramifications of Korea’s division and, ultimately, to the multilateral negotiation of a durable peace treaty.

PPNK is a new network pledging “to contribute to current efforts to reconcile all sides of the Korean conflict through peaceful means.”