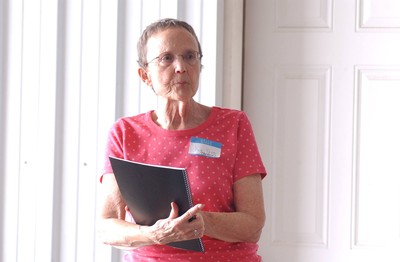 I’m in St. Louis for the 223rd General Assembly of the Presbyterian Church (U.S.A.), and over the next few days I’ll post a fair bit about the important business of the assembly.

But, in the way of things, life and death will disrupt even the decent and orderly plans of Presbyterians.

So, instead of spending the first day of the assembly doing orientation work with the Presbyterian Peace Fellowship interns I am helping to support, I spent most of yesterday in the hospital keeping vigil for a dear friend and colleague in ministry.

Last evening (Friday), the Rev. Peg True joined the church triumphant, and life will never be the same! She was surrounded by the prayers of countless friends, and her hands were held in a small circle that included her older brother, Fred, and sister-in-law Betsy.

I am comforted in my own grief imagining Peg already serving on the Heaven Innovation and Transformation Team.

Peg, who suffered a traumatic brain injury in a fall Friday evening and never regained consciousness, was a life-long part of the congregation in Arlington that I’ve been privileged to serve for the past 15 years.

Our fellowship hall is decorated with a mix of photographs of the community over the years, and in one taken around 1945, an 8- or 9-year-old Peg is sitting at a Sunday School table with a twinkle in her eyes that suggests she was up to something. She had that same twinkle Friday afternoon as we chatted on the flight we shared from DC.

Behind the twinkle lay a sharp, deeply thoughtful and creative mind buoyed by a warm and compassionate heart. Peg was an educator, a vocational path she followed as a young adult when, in the late 1950s, her call to ministry was blocked by a church still far from ready to support women in ordained ministry.

Nevertheless, she persisted, and, a quarter century later, encouraged by my predecessor at Clarendon, the Rev. Madeline Jervis, Peg was among a group of five women the small congregation supported in seminary. Peg was ordained by National Capital Presbytery and served congregations in National Capital and Baltimore presbyteries until her retirement in the early 2000s.

In retirement, she served as parish associate at Clarendon, where her deep wisdom helped the community through several significant transitions and innovations. In fact, the mission discernment team on which she served for the congregation over the past five months just gave its final report to the session two weeks ago, and the congregation will be making some significant decisions this summer that will become part of her great legacy to Clarendon.

All of that, however, is a bit like a resume. Peg was so much more than even the most impressive curriculum vitae could cover.

She invested in relationships, and a walk with her through her retirement community was like walking with a celebrity. She knew everyone there, even though she’s only lived there for the past few years. In the short while she lived at Goodwin House she’d already been deeply involved in several groups working to make improvements for both residents and the staff.

That was simply the way she walked through life: paying close attention to people and situations, and using her immense gifts to help them get better.

After she died, I made some calls to folks who I hoped would hear the news from me rather than via Facebook. Among those were my three young-adult children. Peg was part of each of their confirmation journeys, but more than that she was part of their lives. When I reached Martin, my 24-year-old middle child, he simply said, “aw, Peg was the best.”

That pretty much captures it. Margaret ‘Peg’ True was the best. Well done, good and faithful servant.