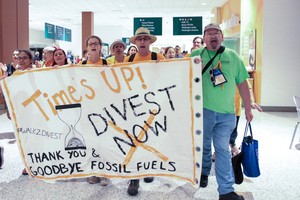 Presbyterians who walked from Louisville to St. Louis for a world free of fossil fuels arrive at the 223rd General Assembly in St. Louis. —Photo by Danny Bolin

On Father’s Day the rev. abby mohaupt (she prefers her name and title in lowercase) of Fossil Free PCUSA told The General Assembly News that the Presbyterian Church (U.S.A.) can take better care of Mother Earth by divesting from fossil fuels.

mohaupt, moderator of Fossil Free PCUSA and a teaching elder from the Presbytery of San Francisco, wants the Church to take bold action against the industry most responsible for climate change.

“It’s easy to do the thing you’ve always done,” mohaupt said. “So much harder to step out with faith and courage and hope.”

Fossil Free PCUSA supports Overture 08-01, currently being considered by the Environmental Issues Committee, which instructs the Board of Pensions (BOP) and Presbyterian Foundation to “divest from fossil fuel and actively invest in securities that focus on renewable energy.” That overture, presented by the Presbytery of Hudson Valley, is similar to a second divestment overture proposed by the Presbytery of East Tennessee. Together they have concurrence from 42 presbyteries.

The Church’s current position — supported by the Presbyterian Mission Agency’s Mission Responsibility Through Investing (MRTI), BOP and Presbyterian Foundation — takes a more conciliatory approach to mitigating climate change, including ongoing dialogue with fossil fuel producers and the submission of shareholder resolutions to corporate boards. Although MRTI does not rule out recommending divestment from certain fossil fuel companies, it has not done so to date and is not expected to do so at the 223rd General Assembly (2018).

While commending the faithful work of MRTI, mohaupt takes issue with its “long-term” approach to shareholder engagement in this case.

“So much of our disagreement with MRTI is about timelines,” she said. “We don’t have time to do business as usual” when it comes to climate change.

Prior to the Assembly, mohaupt joined others from Fossil Free PCUSA on a 212-mile walk from Louisville to St. Louis. The journey drew attention to the forced movement of people due to climate change and promoted what the Fossil Free PCUSA website calls “categorical divestment” in all companies in the fossil fuel industry.

Responding to a News question about whether the Assembly has the authority to direct the Board of Pensions or Presbyterian Foundation how to invest, mohaupt asked a question of her own: “Should the BOP decide what the Church does with its money? Or should commissioners?”

“I believe in divestment not as a money manager, but as a theologian.”

Overture 08-01 also calls for the BOP and Presbyterian Foundation to “actively invest in securities that focus on renewable energy.” mohaupt views such reinvesting, and the retraining of workers currently employed by fossil fuel producers, as another Church priority.

“We can’t stand with the marginalized” — including indigenous communities and people of color disproportionately affected by climate change — “if we’re profiting off their marginalization.”

mohaupt noted that other denominations have already taken steps toward fossil fuel divestment. Emily Brewer, executive director of the Presbyterian Peace Fellowship (a group that supports Fossil Free PCUSA), told the News that the Fellowship’s investment portfolio divested from fossil fuels in 2015, “and we’ve had good returns since.”

“Divestment is a part of our history,” mohaupt said, alluding to past Assembly actions to divest from industries such as tobacco, firearms and gambling. “What we do with our money matters.”