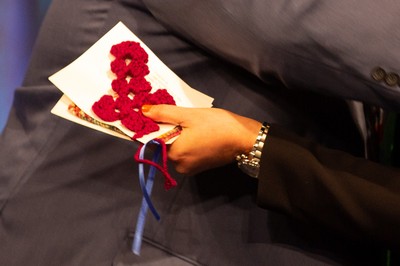 Handcrafted crosses were presented as gifts during the Ecumenical and Interfaith Relations report to the 223rd General Assembly. —Photo by: Michael Whitman

Quick and grateful approval was extended by the 223rd General Assembly Wednesday afternoon to actions recommended by its Assembly Committee on Ecumenical and Interfaith Relations. It was the first Assembly committee to complete its work in St. Louis.

During its deliberations of the previous three days, the committee had an opportunity to interact with representatives of churches and faiths from five continents and with spokespersons from such organizations as the National Council of the Churches of Christ in the U.S.A., Christian Churches Together, the International Council of Community Churches, the Islamic Society of North America, the National Council of Synagogues and the Anti-Defamation League.

Each of the committee’s guests received a hand-crafted pocket cross as a gift.

The committee reviewed and endorsed the ongoing work of the General Assembly Committee on Ecumenical and Interreligious Relations (GACEIR). It also endorsed a prospectus for the third round of dialogue between the PC(USA) and the Episcopal Church in America and referred another prospectus for the ninth round in the dialogue between U.S. Reformed churches and the U.S. Conference of Catholic Bishops to the 224th General Assembly (2020).

An overture from the Presbytery of Carlisle, On America's Interfaith Context and the Church's Challenge, approved by GA223, directs the church to:

A commissioners’ resolution adopted by the Assembly directs the PC(USA) to begin to explore developing a covenant relationship with the Gereja Maseh Injili di Minahasa (GMIM), an Indonesian-language communion of the Reformed Protestant tradition.