Home News Not one step back

Not one step back 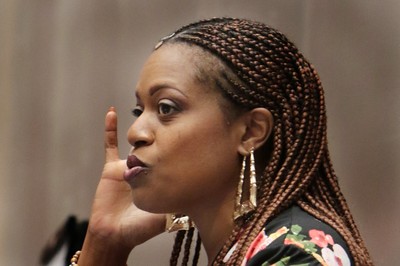 The Rev. Denise Anderson, and former co-moderator of the General Assembly, speaks at the Peace Breakfast Wednesday morning. —Photo by: Danny Bolin

The largest crowd in several decades packed the biennial Peace Breakfast Wednesday at the General Assembly of the Presbyterian Church (U.S.A.).

They came to celebrate and award Peaceseekers.

They came to support causes important to members of the Presbyterian Peace Fellowship.

And they came to hear what the Rev. Denise Anderson, co-moderator of the 222nd General Assembly, had to say about “Not One Step Back: King’s Unfinished Agenda and Why We Still Can’t Wait.”

“Aww, that’s sweet,” Anderson said as the crowd stood and applauded. “I didn’t think anyone would stand for me anymore.”

Anderson told her listeners that it’s time to stand up for the values of the first Poor People’s Campaign, which was cut short with the assassination of the Rev. Dr. Martin Luther King Jr. in 1968. The new “Poor People’s Campaign: A National Call for Moral Revival” is in the midst of a 40-day run of nonviolent moral fusion with direct action and civil disobedience focused on poverty, systemic racism, militarism and the war economy, ecological devastation and the distorted moral narrative.

“You can't talk about one of these things without talking about all of them,” Anderson said.

“During week three of our season, I submitted to arrest as we conducted a ‘die-in’ inside the Maryland State House in Annapolis to bring attention to these issues.

“I died in as the daughter of two veterans who devoted more than two decades each of service to this country. I died in because they were poor Americans and enlisting in the military was one of few options available to them.

“I died in because I'm a former defense contractor who worked side by side with people who wore the uniform. I would regularly run into them after hours at McDonald's or Home Depot ― their second job. I was being paid more than they, and my employer was getting rich while they continued to struggle.

“I died in because Maryland’s gun violence problem is inextricable from its poverty problem.

“I died in for the countless poor citizens corralled into jails on minor, nonviolent offenses only to stay there indefinitely because they can’t afford bail.

“I died in because the war economy is killing us in more ways than we know.”

Anderson asked why, if slavery was abolished in 1863, people still languish in jail for nonviolent offenses. 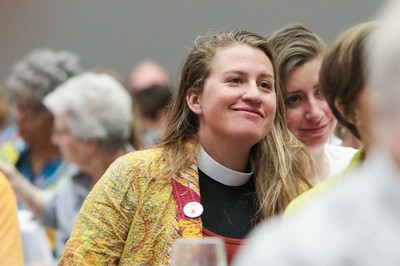 The Rev. abby mohaupt was named recipient of the 2017 Peaceseeker Award for her committed leadership for climate justice in the PC(USA) as moderator of Fossil Free PCUSA. She also organized the recent Fossil Free Walk from Louisville to St. Louis. —Photo by: Danny Bolin

“What is most egregious about the cash bail system,” she said, “is that the siblings incarcerated within it haven’t even been convicted of anything yet. What it does is criminalize poverty, because if you are picked up on a minor offense and can’t afford to pay the fine, you are immediately in violation of the law. That means siblings with already limited means are caged until they can magically come up with funds they definitely can’t get while they’re locked up, since they’re prohibited from working. Again, I ask you, how long are we supposed to wait to get free?”

Anderson’s rhetorical fire brought the crowd to its feet again, with a rousing “We still can’t wait” chant, signaling a commitment to carry on with the fight.

Anderson was accepting the 2018 Peaceseeker Award on behalf of the Revs. William Barber and Liz Theoharis, co-moderators of the new Poor People’s Campaign.

Rick Ufford-Chase presented the 2017 Peaceseeker award to The Rev. abby mohaupt (who prefers the lower-case), for her role as organizer of the group that walked from Louisville to St. Louis to advocate for divestment from producers of fossil fuels. “Abby is like John the Baptist wearing crazy orange clothing and lifting her voice in the wilderness,” Ufford-Chase said. “We set out on a 200-mile journey because abby told us to.”

Visibly choked up, mohaupt introduced the group to her 2-year old niece, Cordelia. She also showed the group a piece of paper she carries with her always, a note from her beloved grandmother. “Both of them have taught me to stop being polite,” she said.

Saying that we can no longer be polite about climate change and our complicity in it, mohaupt said the time to divest is now. “Time is up,” she said. “Where our treasure is, there our hearts are also.”