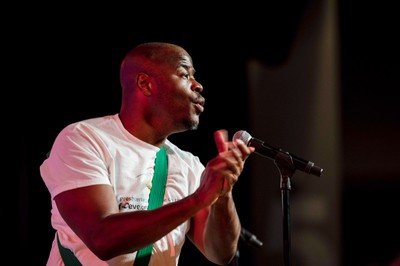 The Rev. Alonzo Johnson leads a teach-in while others march in a Public Witness event at the 223rd General Assembly. —Photo by: Michael Whitman

As hundreds of Presbyterians took to the streets Tuesday afternoon, a smaller group remained in the plenary hall to participate in an alternative act of public witness.  A “teach-in” led by Presbyterian Mission Agency staff members offered an opportunity for learning and conversations on issues related to mass incarceration and racism.

Participants viewed portions of the documentary 13th, which examines the rise in incarceration since the 1970s-era “war on crime.” Ruling elder Char McMullen of Olympia, Wash., a commissioner to the 223rd General Assembly (2018), said the church must learn to adapt to new contexts.

“We thought what we were doing (in the 1970s) was right, and yet the result was not OK,” she said. She added that the church “has to be nimble” in addressing the realities of racism.

Johnson said imprisonment often becomes “slavery by another name,” and reminded participants that those awaiting trial are presumed innocent. “We have some folks who might not have done the crime or who do not have bail money,” Johnson said.

He noted that the church has a role in offering perspective, healing and hope. “We’re needed in the context of prison,” he said.