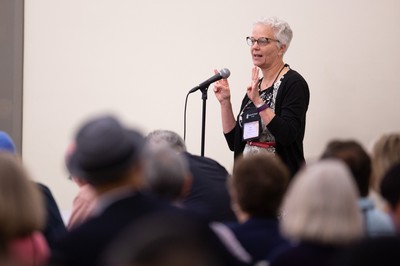 The Assembly Committee on The Way Forward is recommending significant changes in the Presbyterian Church (U.S.A)’s corporate arm and in how the church’s six agencies relate to one another, mid councils and congregations.

Included in the Way Forward Commission’s report, which the committee approved Tuesday, are resolutions prioritizing translation and accessibility in the PC(USA) and requiring race audits of the six agencies.

If the General Assembly concurs with the committee’s recommendation, the denomination’s A Corporation board, whose membership exactly matches the board of the Presbyterian Mission Agency, will be pared from 40 members to 11. The PMA Board would remain in place, but would not serve as the A Corp. after its new board was seated.

The Way Forward Commission’s recommendation approved by the committee also calls for strengthening the office of the stated clerk of the General Assembly; establishing a Diverse Voices Table to examine issues of equity and inclusion within agencies; and creating a Moving Forward Implementation Commission. That commission would be charged with ensuring compliance with and implementation of 2018 assembly action and compliance with recommendations from The Way Forward Commission and All-Agency Review Committee. It would report its findings and recommendations to the 224th General Assembly in 2020.

The committee recommends hiring an outside consultant to address issues of trust and transparency raised in a June 12 administrative action issued by The Way Forward Commission.

Also approved Tuesday were two other important documents — the report of the All Agency Review Committee, and the interim report of the 2020 Vision Team.

The former includes instructions to the six agencies to study the per capita funding model and its ability to pay for the Office of the General Assembly and the PMA, as well as an exploration of “alternative and creative” funding resources for both.

When agencies are developing work plans and budgets, the report says they should identify “what radical obedience to Christ looks like, both in times of possibility as well as in times of peril,” and to determine how to “grieve what was once beautiful, but now is no longer possible.”

The committee disapproved, at the request of the PMA’s Governance Task Force, a deliverance that would have divided the A Corp. into two corporations. It approved updates to the PMA Board’s Manual of Operations.

Charged by the 222nd General Assembly (2016) to develop a guiding statement for the denomination, the 2020 Vision Team calls on Presbyterians to live up to the qualities reflected in the denomination’s acronym: Prayerful, Courageous, United, Serving and Alive.