Home News We are family

More Light Presbyterians honor the past while looking toward the future 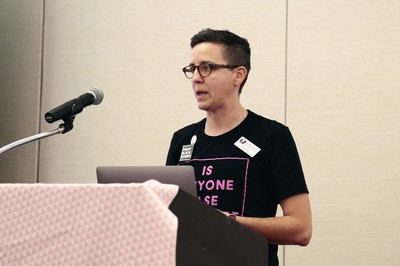 As Amy Kim Kyremes-Parks, a member of the board of directors of More Light Presbyterians, greeted guests at Tuesday’s More Light Lunch, the spirit of welcome and sense of family was generous and palpable.

Acknowledging and honoring her colleagues on the board, the organization’s staff and its many partners — including Brian Ellison, executive director of the Covenant Network of Presbyterians — Kyremes-Parks said that More Light’s executive director, Alex Patchin McNeill, continues to teach her about sharing God’s presence with all, and about mutual liberation.

Following an opening prayer by Kyremes-Parks, McNeill shared the organization’s history, which traces back to a watershed moment 44 years ago when the Rev. David Sindt stood on the floor of the 1974 General Assembly and held up a sign that read, “Is anyone else out there gay?” McNeill said that sign marked the first meeting of the caucus that welcomed those who identify as LGBTQ and their allies. The second pivotal moment in More Light’s history occurred after the 1978 Presbyterian ruling that openly LGBTQ people could be received into church membership but not ordained as church leaders.

“West Park [Presbyterian Church] said ‘there is more light,’ and that they were going to be more inclusive in whom they called to serve,” he said.

McNeill said that in the three years since marriage equality has been reality both in the church and in the US, More Light has “returned to our roots [in protest] and emboldened congregations to step out of the pews and into the streets for prophetic justice.”

Because Cook said that more and more young people are continuing to leave the church because it “doesn’t feel like home,” Cook focused their presentation on ministry with LGBTQIA+ youth.

“Because of the work of our elders and saints, young people are asking about their identity in ways that are totally new,” Cook said, which constitutes a “seismic shift” for the church.

“They have the safety to explore,” said Cook. “For me, it wasn’t until I was working with youth that I could find words for my identity. When I was growing up, the words didn’t exist.”

After citing research that over 50 percent of people ages 18–24 do not see gender on a binary of male-female and that 10 percent of people 18–34 do not identify as cisgender (the gender that corresponds with their birth sex), Cook shared that LGBTQIA+ youth in general are coming out at an earlier age.

“Anyone working with young people in the church would benefit by digging into this,” Cook said. “In church, if they constantly have to defend their identity — if worship is only ‘brothers and sisters’ — youth will simply opt out of church. When we baptize, we promise to nurture them. We promise to journey with young people. I can’t find it stated anywhere that this commitment is conditional. We have an obligation to help LGBTQIA+ youth.”

Cook said that among the best ways church members can support LGBTQIA+ youth in their congregations is to “trust young people when they tell you who they are.”

“Being the best resource is not about knowing all of the terms and definitions in advance,” they said. “It is about reminding those children and youth that they are beloved children of God.”

Because Cook advocated for the respect and use of people’s preferred pronouns — even if they are unfamiliar — attendees were invited to model around tables how such conversations might go.

“Difference is no longer a burden to carry, but a way to see the myriad ways in which the creation reveals itself,” said Cook.

The luncheon closed with More Light’s practice of honoring “all of the people who came before us as a light on this journey of inclusion.” Among others, the name of the Rev. Peg True — who died after a fall at this General Assembly — was lifted up as she was remembered “as a vision of what it means to be a compassionate person on fire for justice.”