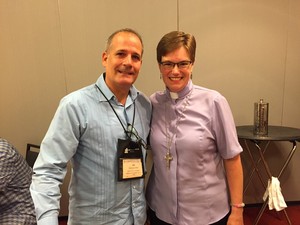 Just as no man is an island entire of itself, no man can speak for an entire national church.

That hasn’t stopped the Rev. Ary Fernández Alban from doing his best at the 223rd General Assembly to answer the many earnest questions he’s fielded about his island home.

Rev. Fernández is moderator of the Presbyterian Reformed Church in Cuba (IPRC), pastor of a congregation in Matanzas and professor at that city’s Evangelical Theological Seminary. This week, he’s also IPRC delegate to GA223.

In Committee 10: Mission Coordination and at the Cuba Partners Network breakfast and booth, Fernandez has shared his insights about Cuba’s Reformed community, relating its hopes and concerns and affirming its links with the Presbyterian Church (U.S.A.).

At the breakfast, Fernández spoke of Presbyterian ties between Cuba and the United States dating back to the 19th century. After the 1959 revolution, Cuba’s Presbyterian community shrank, with many members leaving for the United States. Remaining pastors often ministered to more than one worshiping community, a reality that continues in today’s Cuba, where interest in religion is rising.

Fernández said that the IPRC currently has 54 churches, 25 active pastors and 11 pastoral candidates. The denomination’s biggest challenges beyond ministering to its congregations are “to be the church of Jesus Christ in Cuba” during a time of dramatic economic and cultural change. “There is more inequality in Cuba than in past decades,” Fernandez said. “The Cuban population is also relatively old.”

Another concern of the IPRC is its financial dependence on the United States. “We don’t want to betray our mission or sovereignty in pursuit of funding.”

An overture recommended to the full Assembly by Committee 10 and approved in the consent agenda helps clarify the collaboration between the two churches, affirming “the strong and long relationship between Cuban and United States Presbyterians” through the approval of a “new mutual mission agreement.”

The Rev. Jo Ella Holman, Presbyterian Mission Agency regional liaison for the Caribbean, said that the last such agreement was in 1986. “This updates for current times the opportunities and challenges of mission in Cuba and in the U.S,” Holman said.

“This is about mutuality and working together. It provides a framework for all of our engagements – congregation-, mid council- and Assembly-level – with IPRC.”

At the breakfast, Patricia Metcalf, Assembly organizer for the Cuba Partners Network (CPN), said that one great way for U.S. congregations to connect with Cuba is through the CPN.

The Rev. José Luis Casal, director of World Mission for the Presbyterian Mission Agency, noted another: ask Cuban pastors who don’t have travel visas to come to the United States. Without individual invitations, such visas are difficult to acquire.

“That’s a way you can help to break the blockade of the island,” Casal said.