Home News A pauper’s grave, a place of honor

A pauper’s grave, a place of honor 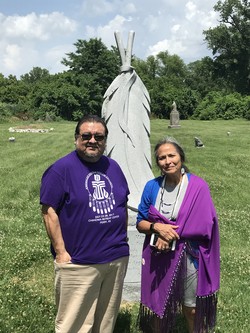 When Irv Porter, associate for the Presbyterian Church (U.S.A.)’s Native American Congregational Support, and Jo Ann Kauffman, a commissioned ruling elder from Inland Northwest Presbytery, stood at a St. Louis gravesite and monument earlier this week, sadness swept over them.

“I can only imagine what it would feel like to be so far away from home,” Kauffman said.

The warriors arrived in St. Louis, having traveled 2,000 miles from Kamiah, Idaho in the fall  1831 to see their friend William Clark.   According to legend they were in search of “the book of heaven.”

“They could see the changes that were coming from the encroaching white world,” Kauffman said. “They were seeking the keys of understanding the new, modern technology. Every white person carried this book. They wanted to understand what was in it.”

Within a month of seeing Clark, the two warriors became ill and died.

Porter, who is a descendant of Speaking Eagle, was at the gravesite in 2003 when an 8-foot granite carving of two eagle feathers — designed by a historian from Lapwai, Idaho — was dedicated in the warriors’ honor.

The Nez Perce nursed Meriwether Lewis and Clark back to health when the two explorers emerged out of the Bitterroot mountains in 1803, near starvation. According to Nez Perce oral tradition, an older tribal woman helped convince leaders to not kill Lewis and Clark for their guns and ammunition.

“This woman had been helped by a white woman when she was in need,” said Kauffman. “If not for that, the Lewis and Clark expedition might’ve ended. Instead, Nez Perce showed them the way to the ocean.”

While at the gravesite Kauffman sprinkled medicinal roots and homemade tea — something from home — as a way of honoring them for the sacrifices they made “in making a trail for us to come.” She and Porter also sang “God be with you, till we meet again.”

None of the four warriors, who made the trip to see Clark, made it home.

Rabbit Skin Leggings and No Horns-On died on their homeward journey. Their final resting place is not known.

But Speaking Eagle and Black Eagle are here. Their story of a similar journey to that of Lewis and Clark, from the Pacific Coast to St. Louis, lives on — after nearly two centuries of obscurity.

“Last time, when I left the gravesite, it was surrounded by hundreds of people,” said Porter. “This time it looked so lonely — to leave them so far from home.”