Class provides introduction to breadth of the denomination’s work 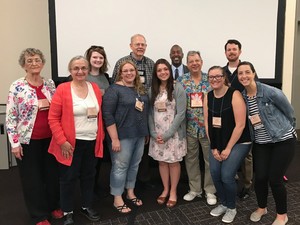 Students and instructors at the 'Presbyterianism: Principles and Practices' class held during PC(USA) 223rd General Assembly in St. Louis.

Rebecca Higman faced a dilemma. As an observer of the 223rd General Assembly (2018) of the Presbyterian Church (U.S.A.), Higman, a first-year student from the University of Dubuque Theological Seminary, knew that her role was limited. But as the committee she had been following was wrapping up its report, she was invited to add her signature attesting to the report’s readiness to be presented to the Assembly.

Higman’s experience was just one of the ways seminarians from across the denomination experienced the church’s work firsthand through the for-credit course “Presbyterianism: Principles and Practices.”

Eight students from Presbyterian seminaries took part in the class, which was offered by Austin Presbyterian Theological and Louisville Presbyterian Theological seminaries, along with the Office of the General Assembly. Students met with church leaders, committee moderators and advisory delegates while also observing the Assembly’s business. The students’ reflections will be compiled into research papers for a final project to receive academic credit.

“I do hope some of these papers will appear across the church,” said the Rev. Clifton Kirkpatrick, a professor at the Louisville seminary and former General Assembly stated clerk.

Kirkpatrick was one of the instructors of the course, along with the Rev. Paul Hooker, associate dean for ministerial formation and advanced studies at the Austin seminary, and the Rev. Jerry Van Marter, interim director of communications for the Office of the General Assembly.

The class was first offered in the early 1990s by the late Rev. Jack Rogers, a former General Assembly moderator and professor of ministry at San Francisco Theological Seminary. In Rogers’ later years, Kirkpatrick co-taught the class. Hooker and Van Marter first joined Kirkpatrick for the 222nd General Assembly (2016) in Portland, Oregon.

On Friday, the students watched the assembly’s often-painstakingly slow methods of perfecting motions from the bleachers, checking in with others on social media and commenting on business. Carrie Winebrenner, a student from the Austin seminary, said the group had tongue-in-cheek called themselves the “Peanut Gallery Advisory Delegates.”

Despite early mornings and long debates, the students noted that the course had enriched their preparation for ministry. “My perception of the church has deepened,” said Michael Gable, a senior at Columbia Theological Seminary, adding that it has been a time of “soaking in what the PC(USA) is all about.”

“I think I’m learning a lot about the creative potential of the church,” Winebrenner agreed. “There’s a lot of energy here.”