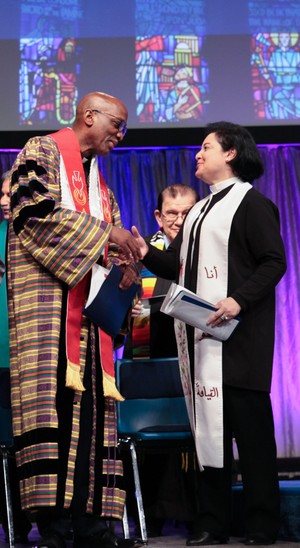 “We see that many people and organizations talk about justice,” says the Rev. Najla Kassab, president of the World Communion of Reformed Churches (WCRC). “But what do these statements mean to those who are suffering injustice? What do they mean to any of us who hear the words? Not enough!”

“If we are not willing to be present at the point of pain,” she continues, “we should stop talking about justice.”

In 2017, Kassab became the first woman to be elected as president of the WCRC, a fellowship of 233 Reformed or Presbyterian churches in 110 nations.

A graduate of the Near Eastern School of Theology and Princeton Theological Seminary, she is an ordained minister and Christian educator in the National Evangelical Synod of Syria and Lebanon. The central administrative offices of the WCRC are in Hannover, Germany. Kassab operates primarily from her home in Beirut but travels widely, preaching from a different pulpit almost every week.

Kassab came to St. Louis in mid-June as an ecumenical guest, speaker and preacher at the 223rd General Assembly (2018) of the Presbyterian Church (U.S.A.). She expressed appreciation for an Assembly that is “willing to move” as well as speak, especially in a public march supporting bail reform and rallies at the Assembly protesting U.S. immigration policy.

“Actual movement — being willing to move — gives life to an organization,” says Kassab.

Kassab hopes that her seven-year term as WCRC president will begin by raising questions of justice within the communion itself and among its member churches. From the balance of representation and seniority on organizational staffs to empowering diverse regions, young people and all who have been marginalized, she champions the concept of “Just Communion – a commitment to unity centered on justice for all.”

“We need to take risks,” she explains, “We need to get involved in real life. I have visited communities in Syria while they were being shelled. Bombs have fallen near where I live in Beirut. Whether we are talking about Colombia or the Korean peninsula, we need to be willing to stand in the shoes of the people who are there if we want to make a credible witness to the love of God in Jesus Christ.”

She concludes, “We are challenged to see that what we intend to do really does influence lives. We are challenged to listen carefully to others, to become less rather than more hierarchical, and only then to put our energy, effort and money into something that will show results.”