Annual statistical report to include old and new questions 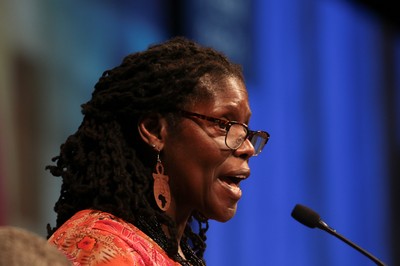 In an unusual move, commissioners of the 223rd General Assembly (2018), waited until the Saturday morning plenary to approve an increase in the per capita rate to $8.95 for the next two years after postponing the vote on Friday night in an attempt to assure the increase covers the financial implications of all actions taken by this assembly.

Three new amendments popped up from commissioners in another attempt by the Assembly to better manage costs. Commissioners seemed well-aware of the financial implications of the 16 new committees, task forces and groups established at this Assembly. The sentiment reflected recommendations of The Way Forward Commission to be mindful of future costs.

Before commissioners arrested deliberation on Friday night, the Assembly Committee on General Assembly Procedures moderator Y. Dianna Wright of the Presbytery of Salem asked commissioners to speak in small groups for 10 minutes, half turning to face people at tables near them. Wright employed a similar method of deliberation in the committee meeting for more than 30 minutes which seemed to increase the members’ understanding and clarify their positions.

After the Assembly’s actions, the per capita expense budgets are: 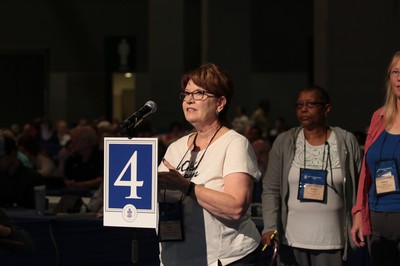 Commissioners approved all other recommendations from the Assembly committee on General Assembly Procedures except one amendment regarding the replacement of all questions for the Session Annual Statistical Report (03-09). The amendment restored some of the old questions to include gender, disability, and Christian education enrollment.

The new statistical questionnaire initially garnered criticism for not including gender percentages and categorizing many people of color to a narrow box.

The Rev. Susan Carter Wiggins, Presbytery of the Mid South, spoke for the Advocacy Committee of Women’s Concerns, saying the group initially disapproved of the new questionnaire because it did not include the representation of women. However, the group felt the comments for future improvement of the questions were acceptable even before the Assembly amended the motion, 269-200, to include some of the older questions and the perfected motion was approved 437-57.

One of two commissioner resolutions addressed by the committee prompted many concerns about granting advisory delegates vote in moderator elections. The Assembly concurred with the committee’s compromise proposal to refer the concern to the OGA, “to be in consultation with the advice of the Advisory Committee on the Constitution and the Advisory Committee on Social Witness Policy, and to bring a recommendation before the 224th General Assembly (2020) for full consideration, including the possibility of constitutional amendment.”

Several Young Adult Advisory Delegates (YAADs) on both sides of the issue spoke to it on the floor of the Assembly. Many commissioners affirmed that they do take seriously the advisory voice and votes of the young adults and other advisory delegates. However, the church’s constitution requires full voting privileges to Presbyterian ruling and teaching elders only. Many of the YAADs are not ruling elders and not all advisory delegates are Presbyterian.

“When I was in my twenties I thought no one was listening to me,” said Tom Heitz, a 72-year-old ruling elder from the Presbytery of Utica. “I really feel this motion is appropriate. It does start a process… that will someday lead (to a constitutional amendment). They (YAADs) need the vote as quickly as we can get it to them.” 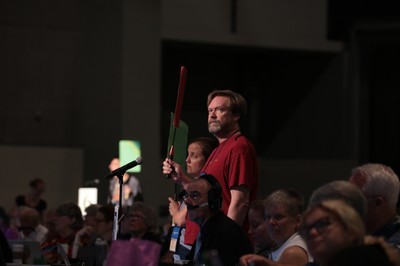 The advisory delegates overwhelmingly approved referring the item with comment for possible action at the 224th General Assembly rather than attempting to change the Constitution at this Assembly. YAAD and Theological Student Advisory Delegates (TSADs) votes were a combined 101-30 (77%) to refer, while mission co-workers and ecumenical delegates advised referral with a combined vote of 10-5. The Assembly followed with 357-138 (72%) to refer.

Another commissioner resolution asks the OGA to look for ways to reduce the cost of Assembly meetings, a concern which is also being addressed by actions approved from The Way Forward Commission.

Other items of business from Assembly committee 3 included approval of a request from the General Assembly Committee on Representation’s request (03-06) for two additional members. Also, commissioners refused to limit how many presbyteries can send overture advocates to future assemblies.

The Assembly also agreed to ask the Committee on the Office of the General Assembly (COGA) to consider several revisions to the General Assembly’s standing rules, including reducing time spent in public hearings while ensuring committees will hear opposing points of view from experts asked to speak.