Home News It’s worth the time to get it right

It’s worth the time to get it right 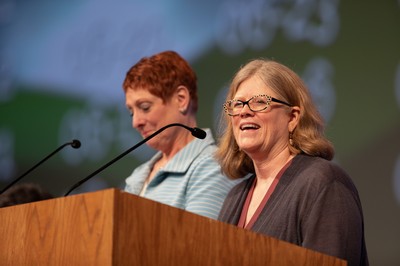 The hour was getting late, but commissioners sat up straight again to deal with the question of paid family leave on the last night of the 223rd General Assembly of the Presbyterian Church (U.S.A.)

A cluster of overtures on family leave had come to the Polity and Church Orders Committee and now were before the Assembly. “Our committee was quick to acknowledge this is a justice issue,” said Ruth Huff, chair of the committee. “But the committee was also quick to realize it’s an extraordinarily complex issue.”

Even though the committee had labored for two days, they were unable to develop a coherent set of recommendations. The original overtures lacked the specificity necessary for the complexity of the issue, said Bonnie Yuscavage, a ruling elder commissioner from Lackawanna Presbytery. Yuscavage brought an amendment to create a task force to “study, work, pray and discern” on the issue of paid family leave and to bring a report for implementation to the 2020 Assembly.

Although acknowledging that some people who need family leave will not be helped right now, Deloris Bryant-Booker made the case that a task force to come up with a comprehensive list of recommendations will move the church forward faster than more piecemeal approaches.

The Assembly agreed with her and voted to establish the task force, which will work in collaboration with the Board of Pensions and other appropriate partners. They went on to adopt a resolution urging the creation of family leave policies offering at least 12 weeks of paid leave annually.

A groan arose in the plenary hall as the group looking at a late night ahead saw the number of items on the polity committee’s report. Since several involved small technical changes, the question arose about why they had not been included in the consent agenda.

This provided the opportunity to learn that items that change the constitution cannot be placed on the consent agenda. The approved changes:

In other actions, the Assembly: