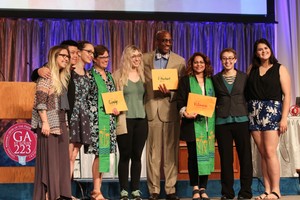 Young Adult Advisory Delegates present donations to causes supported by the Stated Clerk and Co-Moderators at General Assembly 223 of the PC(USA) meeting in St. Louis —Photo by Danny Bolin

Young Adult Advisory Delegates put their money where their hearts were during Saturday’s closing plenary, directing a $1,605 special offering they collected toward causes important to the General Assembly’s co-moderators and stated clerk.

Presbyterian Disaster Assistance received $535 for Puerto Rico hurricane relief to honor Co-Moderator Vilmarie Cintrón-Olivieri. PDA’s refugee support efforts received the same amount in the name of the other co-moderator, the Rev. Cindy Kohlmann. The remainder honored Stated Clerk the Rev. J. Herbert Nelson and one of his favorite movements, the Poor People’s Campaign.

Kohlmann, moderating at the time of the presentation, teared up for a moment before helping the Assembly conclude its business before closing worship.

In addition to the applause given to the news of the YAAD gifts, the Committee on Local Arrangements from the Presbytery of Giddings-Lovejoy earned one of the most sustained ovations of the Assembly when its leadership was recognized.

“From the moment you arrived at the St. Louis airport, you have been embraced by these gracious people,” Deb Davies, manager of meeting services, told the Assembly-goers.

The Rev. Tom Hay, director of assembly operations, noted that COLA members had “stepped up to the plate” while hosting last year’s Big Tent and again during the Assembly’s Hands and Feet initiative and the June 19 march to the St. Louis Justice Center. “So we decided they needed a new plate,” Hay said, offering COLA leaders a pottery one with the PC(USA) logo, produced by Louisville Stoneware.

The crowd then took in a video depicting what to expect during the 224th General Assembly, June 20-27 in Baltimore. Presenters even tried out a tag line: “See you in 2020, hon.”

Nelson praised the work of the 538 commissioners and nearly 200 advisory delegates, who “stayed in the game, pushing not so much your own agenda, but what God has put in your heart.”

“Don’t get up from the table,” he urged them. “Hang in there and keep pushing … We have work to do that is far greater than any of us.”

Kohlmann called commissioners “ambassadors of this General Assembly. We urge you to tell the story. Share that we gathered to discern the will of God.”