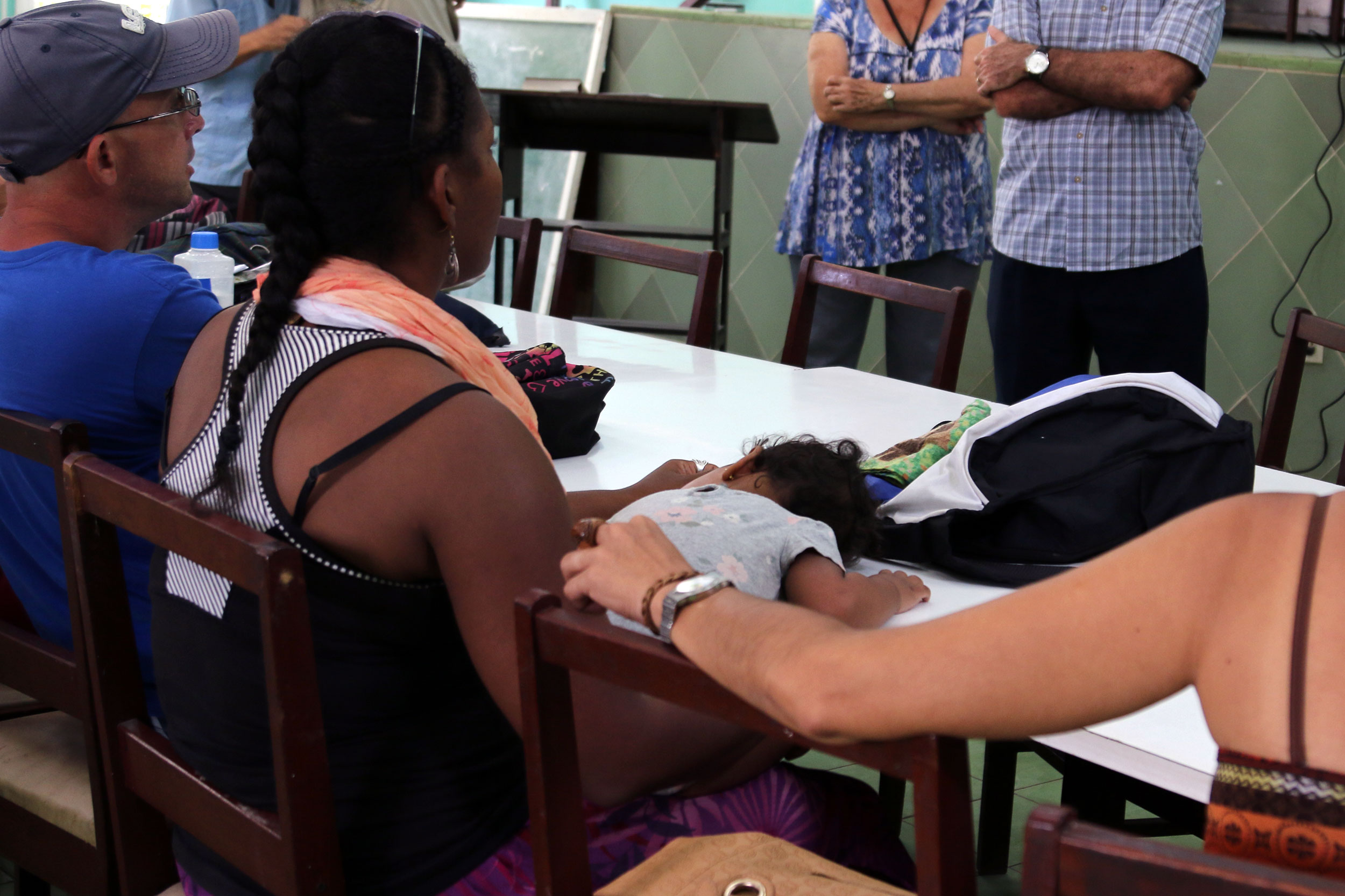 Hiromis listens while her daughter, Gita, naps during a lecture at ISECRE.(Photo by Randy Hobson)

Gita, a toddler, sits on her mother’s lap, her head lying on the table in front of them so quietly she might be napping. It is as if she is willing her mother, Hiromis, to concentrate on her studies in the Superior Ecumenical Institute of Religious Sciences (ISECRE), a weekly interfaith academic program of the Evangelical (Presbyterian) Theological Seminary (SET) in nearby Matanzas.

“She comes with me every week—she has to because her father works on Saturdays,” says Hiromis, who laughingly reveals that she is named after a Japanese television soap opera character. Hiromis, a Cuba native who lived for five years in India before returning to the island eighteen months ago, is a leader of Havana’s small Hare Krishna community.

“The [ISECRE] program helps me teach my community better,” she says. “Learning about others’ faith strengthens my own beliefs so I can explain better why I am of my faith.”

ISECRE was founded in September 1995 under the name ISEBIT (Superior Ecumenical Institute of Bible and Theology) to prepare leaders and members of various Christian denominations in Havana who wanted to strengthen their biblical and theological education. In February 2010, the board of trustees of the SET adopted the ISEBIT program to expand its focus from ecumenical to interfaith education and changed the name to ISECRE.

“The program used to be only for the leadership of the churches,” says the Reverend Alina Camps of the Presbyterian Reformed Church in Cuba (IPRC) and dean of the program. The Reverend Reinerio Arce, retired SET president, serves as vice-dean. “But people were coming with great interest but no faith,” Camps continued, “so we changed from biblical and theological studies to the science of religion.” 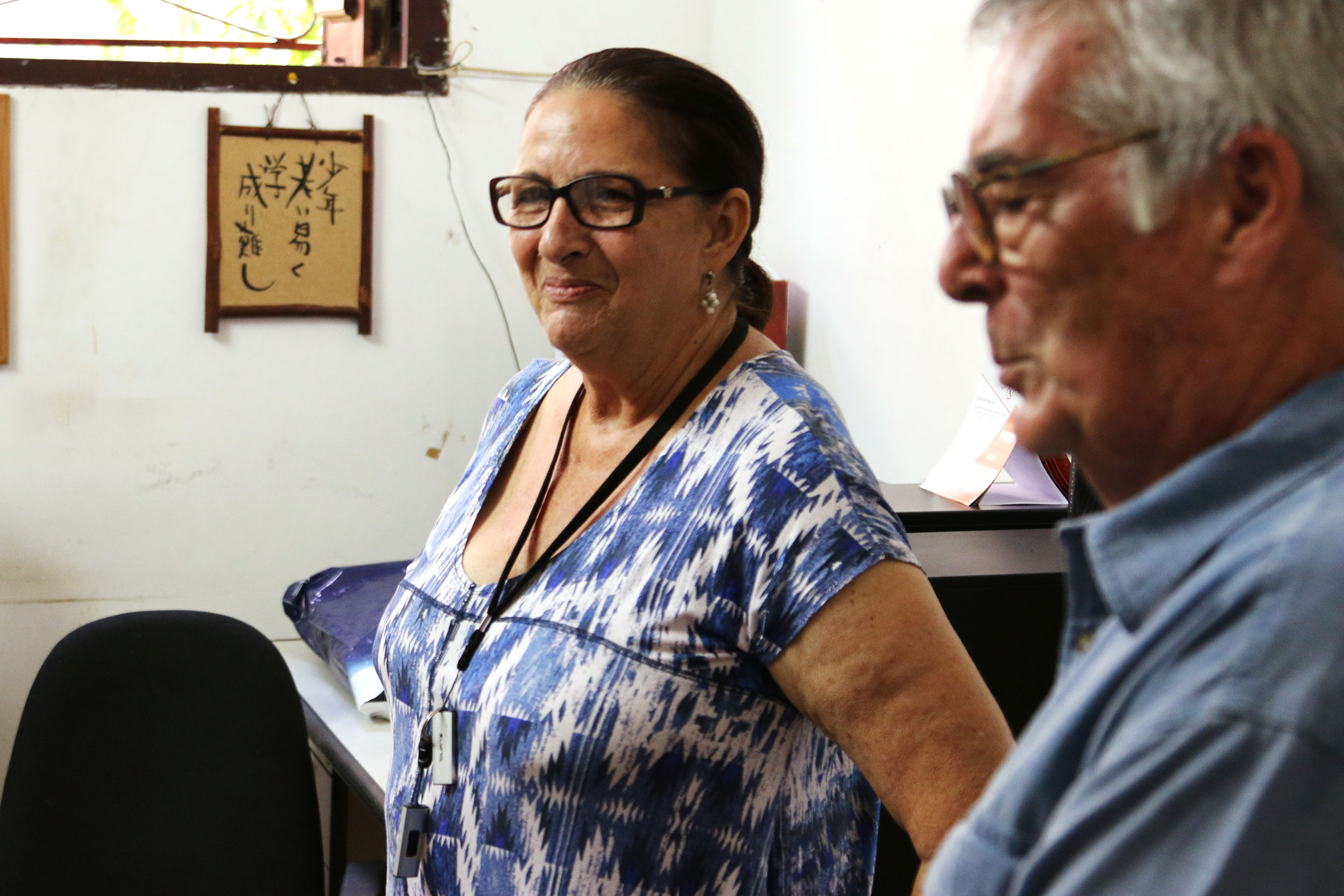 The Rev. Alina Camps serves as dean of ISECRE, an interfaith program of the Evangelical Theological Seminary in Matanzas. (Photo by Randy Hobson)

ISECRE, which operates out of cramped quarters at the Episcopal Diocese of Havana offices here, operates at full capacity of 100 students at a time. There is a long waiting list for the program. SET President, the Reverend Carlos Emilio Ham, “dreams of a building of our own in Havana so that we may let everyone in.” Ham says the cost of a building and necessary refurbishing will be about $250,000.

Participants are remarkable in their diversity: 66 percent are women, 37 percent are non-Christian. Program participants, in addition to Hiromis and two other Hare Krishnas, include Christians of all stripes, Jews, Buddhists, Hindus, and practitioners of numerous Afro-Cuban religions. “They start as non-believers,” says Camps, “but as they become more engaged, they become less skeptical. A true value of ISECRE is in the dialogue. This is a good space.”

More than half of ISECRE’s ten or so instructors are professors at the University of Havana who sacrifice their “spare” time to teach. Students study to earn Bachelors or Masters degrees in the Science of Religion, but for many the degree is secondary.

“For years religion was frowned upon in Cuba but now there is more openness,” says Roberto Chaviano, a Catholic student who works as a museum docent in Havana. “I am in ISECRE,” adds Chaviano, who led the chapel service before the day’s class, “so that I can learn about what I think and believe by learning what others think and believe. I am more interested in being a better teacher and leader than in getting the certificate.”

The open air hallways of the Episcopal Diocese of Havana create a spiritual and relaxing gathering place for attendees of ISECRE. (Photo by Randy Hobson)

The ISECRE program—which is publicized solely by word of mouth—is increasingly attracting lay people, not just religious leaders. “There are two other Hare Krishnas here,” says Hiromis. “This class is very popular with us.”

Chaviano agrees. “I appreciate this chance as a layperson because before all of the opportunities have been restricted to priests and clergy. And I appreciate the different points of view because there hasn’t been much opportunity to share and explore them until this course,” he says.

“I have learned that we all have many of the same principles,” Hiromis says. “In most ways all of our religions glorify God. Isn’t that what’s most important?”

For information about how to contribute to the SET and its ISECRE program, click here.