More than 800 monuments in the memorial represent a U.S. county where lynchings took place. Photo by: Valerie Young

Three times a year, synod executives from across the country gather together to share, pray, and seek solutions to problems or challenges in their communities of worship. Planners for this month’s meeting in Montgomery, Alabama, took a different approach, a field trip.

The fifty attendees made a daylong visit to the Legacy Museum and the National Memorial to Peace and Justice. Both are managed by the Equal Justice Initiative; an organization working to end mass incarceration and protect basic human rights for the most vulnerable people in American society.

“The Legacy Museum was pretty striking, especially as we learned about the Racial Terror Lynchings, where African Americans were killed by mobs of people,” said the Reverend Tricia Dykers-Koenig, associate director of mid council relations in the Presbyterian Church (U.S.A)’s Office of the General Assembly. “These lynchings took place because people were offended by the existence of the African Americans during that time and tried to control those who might think about voting or having the same rights as whites.”

The Legacy Museum is located on the site where enslaved people were once warehoused. The nearby Alabama dock and rail station is where tens of thousands of African Americans were trafficked during the 19th century. 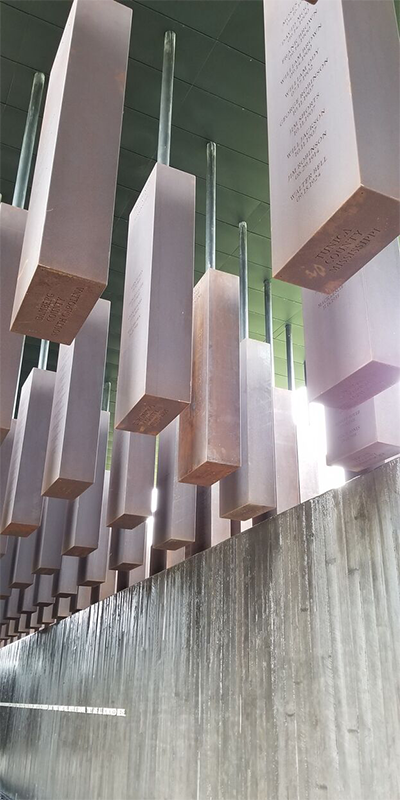 More than 800 monuments in the memorial represent a U.S. county where lynchings took place. —Photo by: Valerie Young

“It was in the Legacy Museum’s timeline, ‘Enslavement to Mass Incarceration,’ that demands I face the bigger picture and evolution of not just the long plight of our African/American brothers and sisters, but a deeper awareness of white supremacy,” said Valerie Young, synod leader and stated clerk of the Synod of the Sun in Cedar Hill, Texas.

“As I looked at the wall of jars, too many of which were from counties in Arkansas, Louisiana, Texas, and Oklahoma (the states in the Synod of the Sun), it struck me just how many of those were ‘Unknown,’” she said. “We know someone was terrorized, lynched on the earth contained in those jars—no one even remembers their names. Their names weren’t important because the purpose of those murders, often horrific acts of torture in a carnival-like setting, was to terrorize an entire race of human beings in order to perpetuate the white lie of supremacy.”

Approximately 800 steel monuments can be found in the National Memorial for Peace and Justice, each representing a U.S. county where a lynching took place, along with the names of the people, if known, and the dates of their murder. Young and others sought out specific counties where they grew up.

“For me, this became an overwhelming task and I am not certain that anyone was able to fully complete what we set out to do,” she said. “I find myself wondering now if our initial goal wasn’t subconsciously in hopes of letting ourselves and our ancestors off the hook—or something inside attempting to lessen the impact on us personally, exercising our privilege to be able to look away when those who we were there to remember had no such option.”

Lori Hylton, administrative coordinator for the Synod of the Northeast, says she was particularly moved by the way the monuments were laid out.

“The site was designed to make you think about the volume of lynchings that took place across the country. Each county had a marker listing names of people that were lynched in that locale,” she said.  “Markers started off on the ground as you enter, but as you moved through the memorial, the markers got higher and higher off the ground as if the markers themselves were being hanged.”

Dykers-Koenig says the response to the tour was overwhelmingly positive. “Attendees got together to think about what they could take back to their own synods. A number of them said they would bring more people here.”

Young says people are influenced by the way they are raised, adding that some never experience anything beyond their nuclear family.

“Somewhere along the line, we as (white) people convinced ourselves that we have the right to determine where, when, how, and whether certain people are worthy of life or admittance to our country. This is the lie of white supremacy,” said Young. “We were not intended to have such power or privilege. That is not God given.”

“We need to deal with these issues and confront the fact that slavery didn’t just end, it evolved into something we are still living with today,” she said. “They talk about the evolution of slavery instead of the abolition of slavery. It’s not just about what happened 150 years ago, it’s also about what’s happening today. The museum is very powerful in making the case and asking questions. It leaves visitors with a lot of questions to grapple with.”