Home News ‘This is the way we sharpen our axe’

‘This is the way we sharpen our axe’ 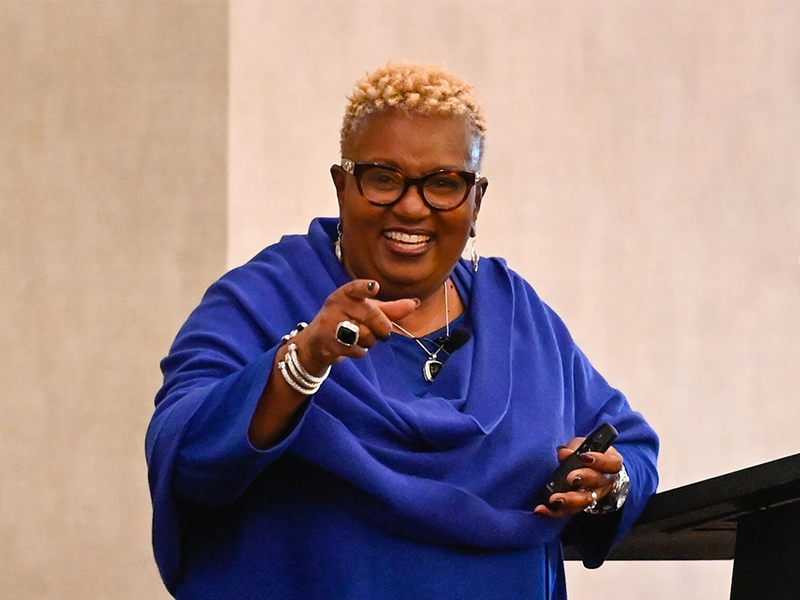 Monica Walker, a senior trainer with the Racial Equity Institute, was one of two presenters Wednesday during a discussion on race. About 300 members of the Presbyterian Church (U.S.A.) national staff participated. Photo by Rich Copley. 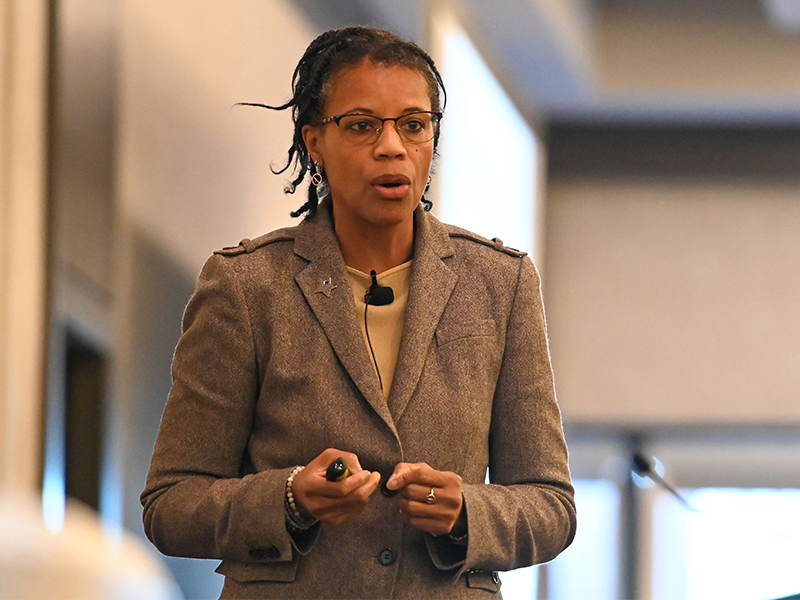 Dr. Debbie Stroman, who teaches at the University of North Carolina and does workshops for the Racial Equity Institute, speaks Wednesday to members of the national staff of the Presbyterian Church (U.S.A.). Photo by Rich Copley.

Guided by a pair of seasoned consultants, about 300 of the Presbyterian Church (U.S.A.)’s national staff engaged in a difficult and draining conversation about race Wednesday.

“This is the way we sharpen our axe, so that as we go through the forest we can deal with (racism) in a way that is a blessing to God,” said the Rev. Dr. Diane Moffett, president and executive director of the Presbyterian Mission Agency, at the onset of an all-day training informed by a large batch of empirical information compiled by the Racial Equity Institute. “When this information gets translated into our lives, we know we are being the people of God.”

REI’s Monica Walker, who recently retired as executive director of the Office of Diversity, Equity & Inclusion for Guilford County Schools in North Carolina, called race “the greatest predictor of outcomes” for Americans. Race significantly determines where people live, how much money they’re likely to make and whether the health challenges they’ll face are likely to end well or badly.

“It’s incredibly powerful and it’s the thing we don’t know how to talk about,” Walker said. “I happen to know you were ‘voluntold’ to be here. We aren’t so good at talking about race even when the person matches our own race … If we are doing the work of God and Scripture, this is something we have to navigate.”

Walker asked her audience “to be willing to be uncomfortable” during the presentation she made along with REI’s Dr. Debbie Stroman, adjunct associate professor with the Department of Health Behavior at the University of North Carolina and director of the Carolina Sport Business Club. “You don’t have to believe anything we say today,” Walker said. “We don’t need your agreement — we will feel most accomplished if you are more curious than when we started.”

Racial inequity looks the same across many systems, she said, including five that REI has studied in-depth: child welfare, health, juvenile justice, education and economic advancement. In addition, she said, socio-economic differences don’t explain racial inequity. And third, the systems themselves contribute significantly to the disparities. 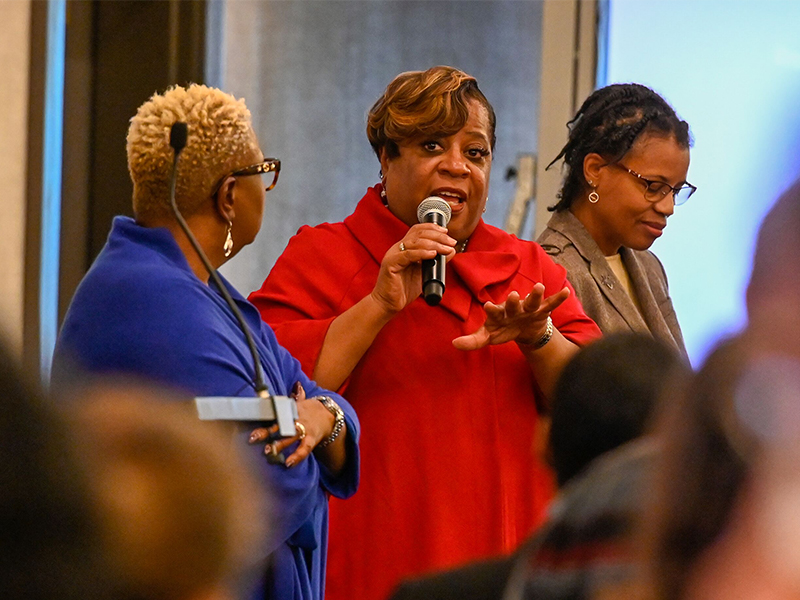 For each of the five systems presented, Walker and Stroman identified studies — many from states and federal government agencies — to support their findings. One, The State of Racial Disparities in Charleston County, South Carolina 2000-2015, came about following the 2015 mass shooting at Emanuel African Methodist Episcopal Church and the police shooting of Walter Scott, an unarmed black motorist. “The findings in this report consistently demonstrate the disparities that exist in Charleston County based on race and poverty,” the report states. “Most importantly, however, these findings can provide the first step in framing an open and relevant conversation on exactly where inequalities in our community exist and how best to address them.”

“We could drop this report on any city in the country,” Walker said, “and it would be true” — even before the local data are analyzed, she said.

REI’s presentation focused on disparities of outcomes between black and white people, she said, because the history of disparities in the United States is built on those two differences. “If you are Asian, Latinx or Native American, does that mean you are not oppressed? No,” she said. “That data is not our data, but it is substantial.”

Stroman focused on dispelling the idea that socio-economic differences explain racial inequality. The Centers for Disease Control and Prevention, which she said has “robust data links that are helpful to us,” reported that black women with advanced degrees have worse outcomes with, for example, child mortality than white women with a General Educational Development (GED) certificate.

A 2009 study by McKinsey & Company looked at what the education gap — academic achievement between children in the U.S. and their counterparts in other countries — was costing the U.S. economy. That gap, Stroman said, “is equivalent to a permanent national recession,” amounting to $2.3 trillion in economic output in 2008. “Moreover,” the report states, “each of the long-standing achievement gaps among U.S. students of differing ethnic origins, income levels and school systems represents hundreds of billions of dollars in unrealized economic gains.”

Stroman called the $2.3 trillion figure cited “opportunity costs on steroids.” That money could be used to “fix our infrastructure” and greatly improve public health and public education, she said. Achievement gaps measured both globally and domestically “affect us all,” she said.

A 2016 study by the New School and Duke University showed that rich black children are more likely to be incarcerated than poor white children. And a widely-reported study, “Are Emily and Greg More Employable than Lakisha and Jamal?” showed that nearly-identical resumés — only the applicant’s name was different to infer his or her race — produced much better results for job applicants with white-sounding names.

“We also have our own lived experiences,” Stroman said. “We have spoken to homeless people. The white person knows he can sit on the park bench longer” or walk into a hotel buffet, slick his hair back, throw a newspaper under his arm and help himself to free food. The black person, she said, is asked, “What conference are you attending?”

Walker called the 2011 study “Breaking Schools’ Rules” “a gift to us from the state of Texas.” The study, which followed nearly one million students through grades 8-12, found that African-American students and children with particular educational disabilities were suspended and expelled at especially high rates. With that kind of punishment, the likelihood they will repeat a grade, not graduate and/or become involved in the juvenile justice system increases significantly, according to the report. 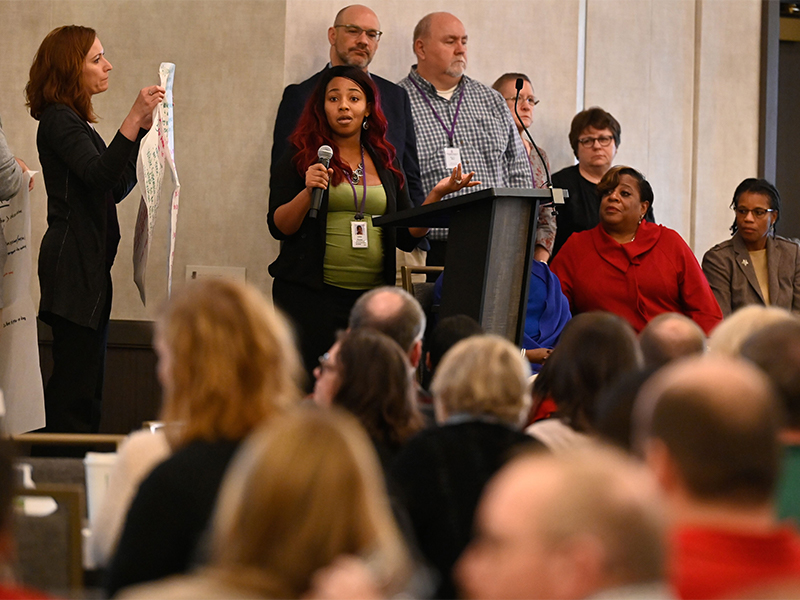 Once they’d supplied answers to five prompts, participants shared their insights with the entire group. Photo by Rich Copley.

“News reports indicate that African American males are a problem in our schools, but Texas says, ‘No, that’s not what’s happening,’” she said. Then-Education Secretary Arne Duncan sent a letter to every school superintendent in the nation, asking what they planned to do about the report’s findings. Sadly, she said, most school districts had no plan.

In yet another study, the Yale Child Study Center wanted to find out if biases among 135 preschool teachers regarding sex and race played a role in suspensions and expulsions among America’s youngest students — a disproportionate number of whom are black. Researchers used eye-tracking equipment to determine how soon teachers could detect challenging behavior as they watched a video of four children — two black, two white, and all four of them actors.

“The researchers wanted to know, ‘Where are you looking for trouble?’ It was from the two African American kids,” Walker said. “Where we look for something is where it’s going to happen.”

But the researchers faced an ethical dilemma: They couldn’t publish findings that were collected deceptively, Walker said. Then something surprising happened: 133 of the 135 preschool teachers participating in the study told the researchers to go ahead and publish their findings.

“We didn’t know we were doing it,” they told the researchers. “We didn’t wake up this morning saying, ‘We are going to mistreat the black kids.’”

“It is happening everywhere, but no one can see it,” Walker said. “We may not intend to, but it’s happening, and these weren’t all white teachers. Race is so problematic for all of us.”

After lunch, participants answered five questions around their tables, then reported what they’d discussed to the larger group. Those questions were:

Stroman posed this scenario for her mostly-white audience:

“There are people who every day are being hit by large and small meteors. People say, ‘Why are you always talking about race?' There are communities of color constantly hit by meteors,” for such behaviors as driving, studying or barbecuing while being black, Stroman said.

“Some people,” she said, “are being traumatized and hurt all the time.”

“The 223rd General Assembly of the PC(USA) directed the six agencies of the church to take steps to become racially just and equitable employers,” Nelson said. “The all-staff gathering is part of our effort to follow through on that directive. This and other actions taken by five of the six agencies will be helpful as we reaffirm our approach to be all-inclusive and draw our siblings closer to Christ.”