Filmmaker David Barnhart’s goal is to anger audiences, get them talking — and spur them to action 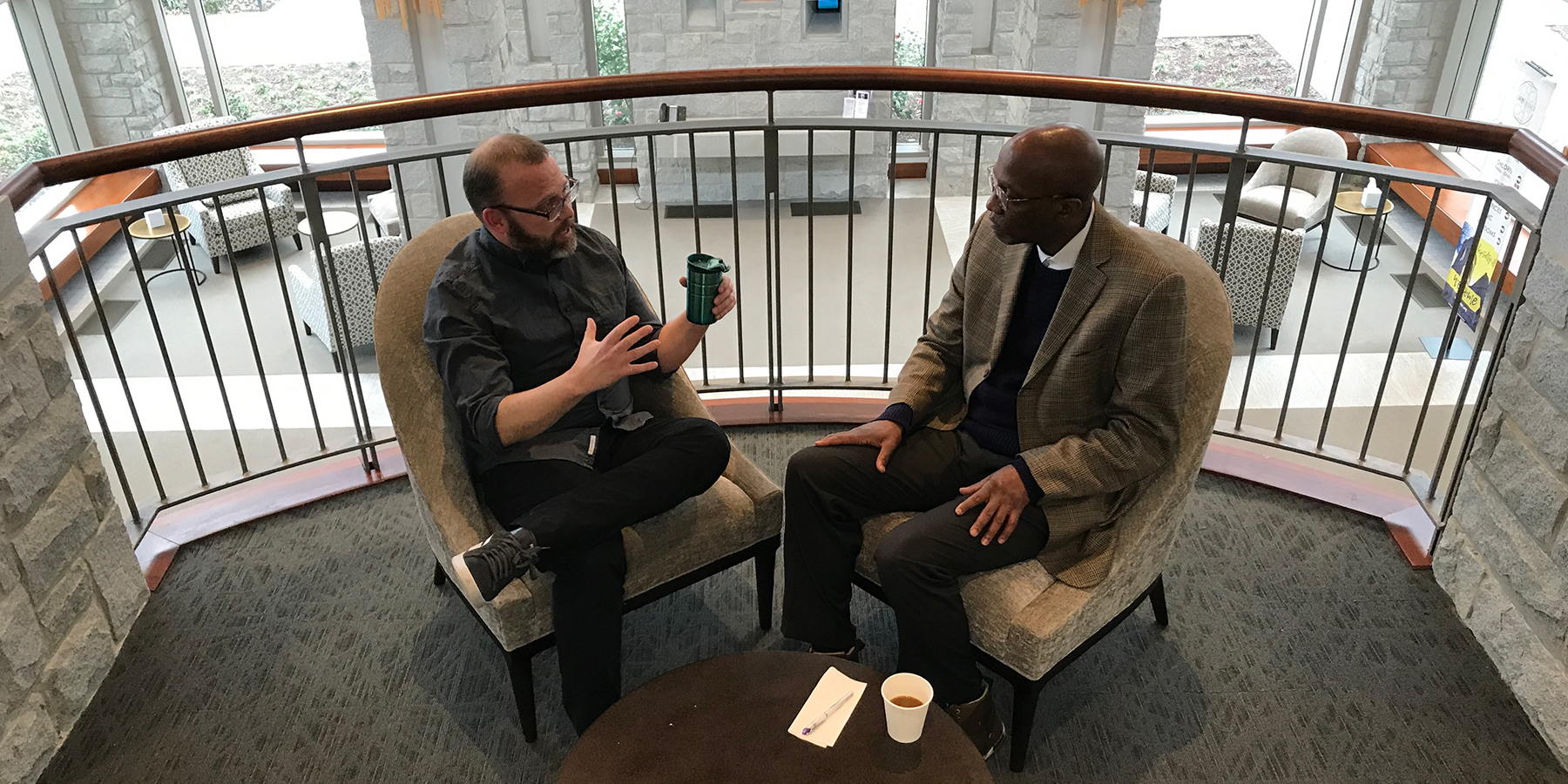 At its heart, said filmmaker David Barnhart, his nearly-completed documentary “Flint: The Poisoning of an American City” is the story about what happens to democracy when people’s voices are taken away.

Created by Story Productions, a ministry of Presbyterian Disaster Assistance, “Flint” elicited reactions of anger when shown at gatherings in places like Sundance, the nation’s largest independent film festival. “That’s what we want” Barnhart told the Rev. Dr. J. Herbert Nelson, II, Stated Clerk of the Presbyterian Church (U.S.A.) during “Coffee with the Clerk” screened via Facebook Live on Monday. Because of scheduling challenges, the Barnhart interview had been taped at North Avenue Presbyterian Church in Atlanta the week before.

“We want people to be moved to action,” Barnhart told Nelson. “We want them to engage in their city and nationally.”

Barnhart said he made three of four trips to Flint to meet people before the cameras began rolling.

“For me, filmmaking has always been about relationships,” he said. “We don’t go anywhere we aren’t invited, and we don’t come with an agenda. We come to listen and we let the community guide us.”

The space where the interview is conducted becomes “sacred space,” he said, because the filmmaker is invited into the space by the person being interviewed.

“Flint” became a film about systemic racism and poverty as Barnhart and his team wrestled with the question, “Why is it OK that some people have access to clean water and others don’t?”

Viewers who consider elevated levels of lead, a particularly serious problem for children and the elderly, as “a Flint problem” should reconsider, Barnhart said: residents in 5,300 American cities are faced with elevated amounts of lead in their drinking water. The health standard for lead in drinking water is zero, he said.

“How can we be part of this larger movement for water justice? I hope the church will answer that,” he told Nelson.

The Bible already has, Nelson pointed out, noting that the Flint crisis came about in part because of collusion between government and companies to allow the latter to “make more and more money.”

“Our Bible has some things to say about that,” Nelson said, “and Jesus did, too.”

A core mission of Jesus’ ministry, Barnhart replied, was storytelling, “stepping into those situations where there were structures in place to dehumanize people” — who is clean and who isn’t, who’s invited to the table and who isn’t. Jesus used stories to highlight the process used to push people out, he said, and “We are still writing those stories today. As we intervene and become the voice of the church, we have to be able to lift up the voices of the dehumanized, the people who don’t have access to clean water.”

Lansing, not far from Flint but better off and a larger white population, saw the same problem coming more than a decade ago but had the financial wherewithal and the political muscle to rebuild its water-delivery infrastructure, Barnhart said.

“I want people to use the film as a resource to engage, to ask questions about their own town,” he said. “We want to reframe and redefine how people view water.”

Most Americans think nothing of flushing their toilets and washing their cars with potable water.

“Think about what it takes to make a gallon of (clean) water,” he said. “I hope this film will get people to talk about that and about who has access to clean water. Let’s lift up those voices and sit down with those who don’t have that access.”

Of the five Flint residents Barnhart and his crew initially interviewed, four had kidney failure. One father working at a water distribution station was concerned that he continually had to repeat things to his young son, who was having difficulty processing what his father was telling him. “What does this mean for my son’s future?” the man told Barnhart. “I want him to finish college.”

For many Flint residents, “the future is not what it was supposed to be,” Barnhart said. Some of the health impacts won’t be known for years, and so it will be important to “connect the dots between lead and other contaminants and what is happening to people, connecting the dots between cause and effect,” he said.

Nelson said “significant pushback” will result from suggesting “that this comes from drinking water. We have seen this history over and over again where people who are impoverished hit a wall as they struggle to get due process that they can afford. It will be a long, drawn-out process.”

The film’s three-minute trailer, which was screened during the interview, traces the environmental history of Flint, a city of nearly 100,000 residents, the car industry and the continued abuse of the river and post-industrial neglect of city infrastructure and environmental regulations have led to the poisoning of families and the community.

“You do feel forgotten,” says one interviewee.

“The system tells you you aren’t worth anything. You’re just a guinea pig,” says another.

“This isn’t supposed to happen to us in America,” says a third.

When the film is ready for release, Barnhart plans to have it screened in communities that want to engage Flint residents who will discuss what they’re been through — and are still experiencing.

“I’d love for the church to host these conversations, because it’s important to have those points of connection,” he said.

PDA’s advisory board saw the film and got angry, but not for the reason Barnhart expected.

“They said, ‘This is the myth I grew up with, the America where everyone has opportunity, things are working well and everything is fine,’” he told Nelson. But dig into the narrative and you see that wasn’t so, he said.

“There was a system in place that laid the seeds for the Flint water crisis. They call it a crisis, but it’s not, really. It was human-caused over years and years,” Barnhart said. “We need to have tough conversations in our cities about what systems have been developed over the years that have allowed some people to have clean water and others kept from having it. Today we see the repercussions.”

Preaching and teaching have their place, of course, Nelson said, wrapping up the hour-long interview, “but there are other ways to transform the world … Maybe it’s something different in your community,” he said, speaking directly to the camera, such as gun violence or schools that struggle with insufficient funding, “the things that are holding our nation and our world back.”

“It’s time now for each pastor, each elder, each member to think about what is our message and purpose,” Nelson said. “It is my hope this broadcast that makes us more aware of what is happening in Flint could point out what is happening in our communities with something other than water, and we find ourselves in the same position.”

“We are dealing with powers and principalities,” Nelson said. “The Apostle Paul made that very clear. Let’s be aware that it’s all right to talk about Jesus anywhere, anytime, anyhow. Jesus reached outside his comfort level time after time, and he refused to allow atrocities and injustice to exist without being addressed.

“As we move forward as cheerleaders for this production, come to Big Tent (Aug. 1-3),” Nelson said. “and let’s talk about whether these same problems could be taking place in our own communities.”