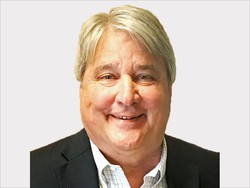 Staff and volunteers with the Presbyterian Church (U.S.A.) are once again rocked by the sudden passing of an executive leader. Mike Miller, acting Chief Financial Officer for the PC(USA) A Corporation (A Corp), died Tuesday night of an apparent heart attack.

Miller joined the staff in April 2018 as Acting Director of Shared Services for the Presbyterian Mission Agency and was named to his latest role last September. He brought extensive experience in all areas of finance, banking and leadership.

“As a co-chair of the A Corp Board of Directors, I have felt since starting this work that God had given us a gift in the form of Mike Miller,” said Christopher Mason. “Losing him only makes me more aware of the thanks we owe God and Mike’s family for lending him to us for this time.”

“I’m devastated to learn of Mike Miller’s passing,” said Bridget-Anne Hampden, A Corp board co-chair. “Throughout our short time of working together, I have always found Mike to be a great partner — very responsive to requests, always willing to engage with a ‘can do attitude’ and very focused on the needs of his clients. He saw his work as a calling. For those reasons and many others, he will be greatly missed.”

The 223rd General Assembly voted to create a separate board structure for A Corp last year and segregate administrative staff into what is being called the Administrative Services Group (ASG). It is the combination of seven departments: Finance & Accounting, Information Technology, Logistical Services, Research Services, Human Resources, Legal Services and Global Resources, which includes translation services.

Carol Winkler serves as Chair of A Corp’s Finance Operations and Budget Committee and worked closely with Miller over the past several months.

“Mike had a genuine gift for inviting people to the table to discuss difficult decisions that had to be made and all were touched by his knowledge and willingness to work together to find common ground. He was kind, talented and a joy to work with,” said Winkler. “In his short tenure with the church, he touched many lives and all of us will miss his positive attitude. I am grateful that he graced my life through the work of A Corp and Presbyterian Women. Thanks be to God for this faithful servant.”

“Mike was significantly assisting us to find our way along a new path toward financial clarity and was tirelessly committed to his craft,” said the Rev. Dr. J. Herbert Nelson, II, Stated Clerk of the PC(USA). “I am deeply thankful for the spirit he brought to this church in a very tense time of re-examining our way forward. He will be sorely missed.”

The Rev. Dr. Diane Moffett, president and executive director of the Presbyterian Mission Agency, says she was devastated by the news.

“My heart is broken, yet again. Mike Miller was a jewel. Though he was Acting CFO, he was a solid part of our team here at the Center. His open and willing spirit made it easy to navigate the transitions happening with the development of A Corp,” she said. “As the changes happened, PMA and ASG staff continued to work together, seamlessly, largely in part to Mike’s attitude.  I knew Mike to be a man of prayer and deep faith.  I will miss him. My prayers abound for his family, friends and all of us who will miss him.”

Miller’s death comes just 24 hours after the passing of the Rev. Robina Winbush, director of Ecumenical Relations in the PC(USA)’s Office of the General Assembly. She died yesterday morning while returning from a 10-day visit to the Middle East with a church delegation.