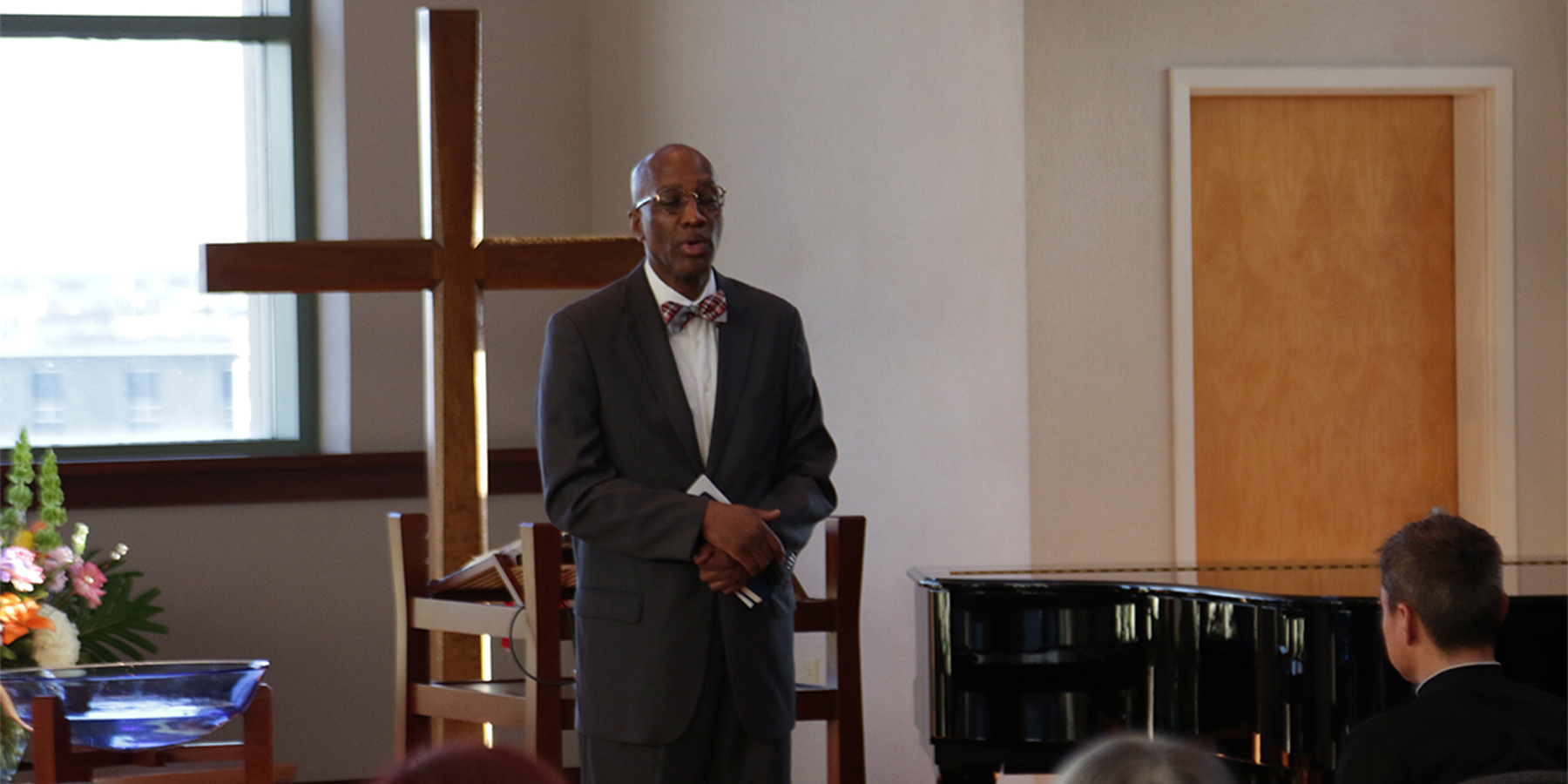 Music, prayer, and reflections were abundant at the Presbyterian Center in Louisville today, as staff from the various agencies of the Presbyterian Church (U.S.A.) gathered to remember the Reverend Robina Winbush and Mike Miller, who both died unexpectedly last week. The Reverend Dr. J. Herbert Nelson, II, Stated Clerk of the PC(USA), led the service.

“This has been a tough year thus far for many of us in the PC(USA). We have lost a number of people in the life of our community as well as our own lives,” he said. “At this particular time, there is a deep connection between pain, suffering, and struggle, and yet we know there is a God of healing who sacrificed an only son, so we might have life more abundantly.”

Nelson said people within the PC(USA) are living in nighttime in lieu of recent deaths within the agencies and their own lives but adds they should know of the joy that comes in the morning and that time heals pain.

“We reach back in the bank of memories to remind us of those who’ve gone before us. In resurrection, the Lord made it clear, death is not an ending but a new beginning for the one who passes on to the other side,” he said. “Our loved ones embrace a new life with Jesus. It’s a powerful scenario of life continuing beyond the grave. I am convinced the same God who brought us this far, will lead us forward.”

Winbush, the director of Ecumenical Relations for the Office of the General Assembly, died last Tuesday morning while returning from a ten-day visit to the Middle East with a church delegation. She was deplaning in New York when she collapsed at the airport. 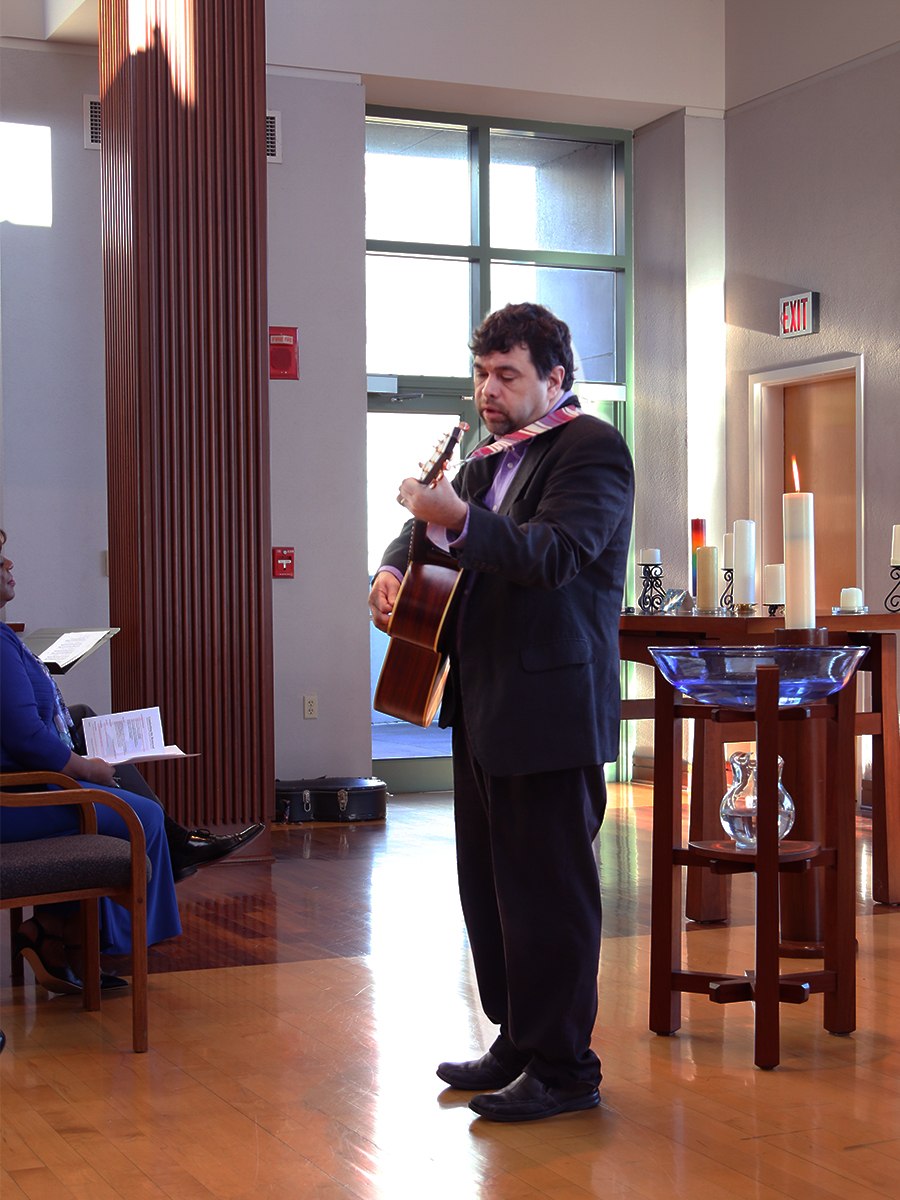 David Gambrell, associate for worship with the Presbyterian Mission Agency’s Office of Theology and Worship, led music during a memorial service for the Reverend Robina Winbush and Mike Miller at the Presbyterian Center. Photo by Randy Hobson

During a time of sharing in the service, Sara Lisherness, director of the Presbyterian Mission Agency’s Compassion, Peace, and Justice ministry, described her long partnership with Winbush.

“I’ve had the privilege of journeying with Robina over the years and know in profound ways what an impact she had, not just amongst us, but around the world in the ecumenical community,” she said. “Indeed, we lost a soul too soon, yet I have every confidence her soul rests in a new life with Jesus.”

The Reverend Rhashell Hunter, director of the PMA’s Racial Equity & Women’s Intercultural Ministries, recalls an earlier time as she and Winbush served as pastors in New York and Michigan congregations.

“There were not that many of us in the beginning. She was a pastor in New York and I was in Flint, Michigan. Any time we got together, we were startled because we didn’t see people like us a lot,” she said. “Robina started a Facebook group for African American clergywomen and invited people to her home to be hospitable and welcoming, especially those who were marginalized. Many are mourning her loss.”

The Reverend José Luis Casal, director of World Mission, described Winbush as a profound theologian and thinker who was “extremely respected” in ecumenical circles.

“She was my mentor in this movement. That profound thinker and theologian impacted me one last time during our last week together while visiting Israel Palestine. Robina was limited in her mobility there because of the challenges of the Bethlehem and Jerusalem streets were really too much for her,” he said. “One moment I asked her why she would come when she knew it would be difficult for her. Her response was she had to be here. I didn’t ask anything else.”

Miller died suddenly last Tuesday night following a massive heart attack. He was serving as the acting chief financial officer for the PC(USA) A Corporation (A Corp).

Kerry Rice, deputy stated clerk with the Office of the General Assembly, shared how a personal tragedy last summer connected him with Miller.

“After my son died, I received an email from Mike saying he would pray for me because he, too, had lost a son too early,” Rice said. “I couldn’t believe this man, whom I met briefly, would be willing to bare his soul. I went up to his office and he gave me a big bear hug. That event revealed to me more of who he was than any time I worked with him.”

“Mike was a lover of people. He was trying to find out how all of this worked and loved the work he was doing,” said the Reverend Dr. Diane Moffett, president and executive director for the Presbyterian Mission Agency. “What beautiful souls they both were, not only publicly, but privately, and that is what really counts.”

A memorial service was held for Miller on Sunday at the PC(USA) Chapel. Winbush’s funeral is scheduled for Friday at the Broad Street Presbyterian Church in Columbus, Ohio. There will also be a memorial service for Winbush at a later date in Louisville. 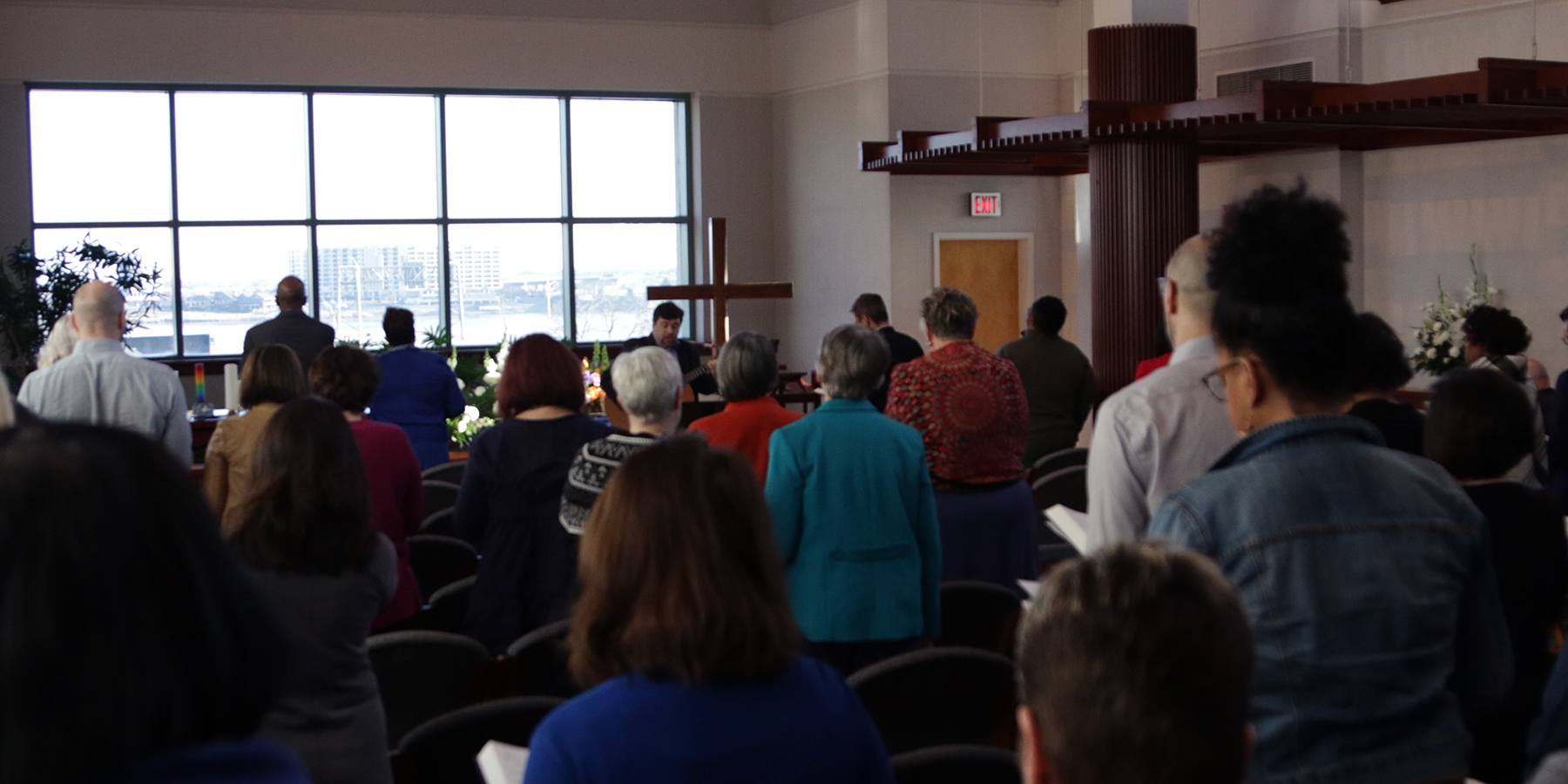