Home News Man on a mission

Man on a mission 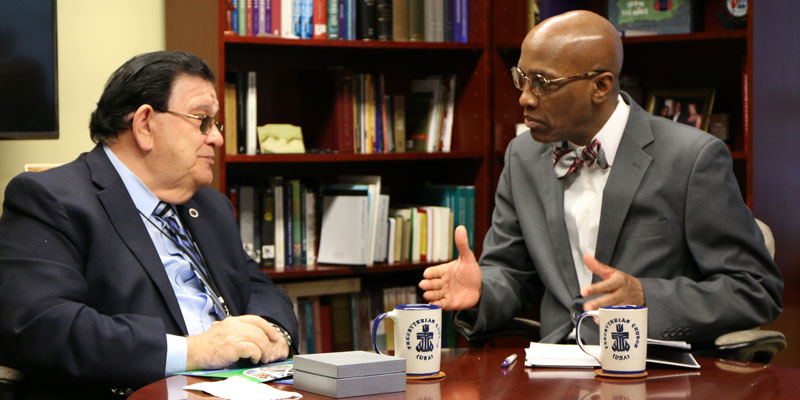 The Rev. Dr. J. Herbert Nelson, II, Stated Clerk of the General Assembly, at right, speaks with the Rev. José Luis Casal, director of World Mission, during "Coffee with the Clerk" Monday. —Photo by Randy Hobson

With what he calls a “labor force” that includes 119 mission co-workers and long-term volunteers as well as 63 Young Adult Volunteers – serving in at least 42 countries abroad as well as stateside – the Rev. José Luis Casal is clear on what is the mission of Presbyterian World Mission.

“Our principle is that we don’t teach our partners anything,” Casal, World Mission director, told the Rev. Dr. J. Herbert Nelson Monday during a lively “Coffee with the Clerk” Facebook Live event.

“We look at mission in a different way,” said Casal, a native of Cuba and longtime ecumenist who was announced as World Mission director two years ago. “We work with (mission partners) on work that is God’s work and God’s mission.”

Over the last few months, four consultations – in Kenya, Germany, Thailand and Colombia – have been held to allow the partners and mission coworkers the opportunity to offer up feedback on how that work is going.

“We asked them to tell us in what way we have achieved and how have we failed or fallen short,” Casal told Nelson. The reaction was positive, he said, and people were grateful for the chance to have their say.

“They told us it was the first time we have been put together to discuss among ourselves,” Casal said. “These groups discussed what are their needs and what resources do they need to accomplish their hopes and dreams. It’s a chance to look at the future while being a main actor at what’s happening now.”

That’s a far different model from traditional mission work, Nelson noted, when mission workers “imposed their will to people on the ground.”

“We are used to coming in with money and putting it on the table,” Nelson said. “The model is shifting to sitting, hearing, finding out and assessing what people need. It is liberating on one hand but difficult on the other hand.”

To date the feedback process has pointed out the need for more people of color to serve as mission co-workers, Casal said.

“It’s not that we are dissatisfied by the percentages” that people of color represent among mission co-workers, he said. “But our goal is to have a more diverse group, and it’s the same with the Young Adult Volunteers,” whom Casal called “the future of our mission work” because “so many of our YAVs become mission co-workers, and that’s been a source of renewal for our work in mission.”

Among the best qualities of the young volunteers?

“They provide new blood, reduce the age of the mission co-workers and they come in with new and fresh ideas,” Casal said.

“We want everyone to be part of this new vision, part of the solution,” Casal said. “We want to understand where God is taking us in this work.”

God’s mission starts with the neighborhood and extends throughout the world – and it includes an ecumenical imperative, Casal said.

“We have to abandon the idea we are doing this work alone,” he told Nelson. “We have to work with colleagues and the faithful in other denominations and other traditions who are willing to work with us … We need people who really believe we are not alone, that we can break the systems of oppression that are in place in many parts of the world and build new systems of justice and bring in the gospel with all its context. That new world needs the proclamation of the message of Jesus Christ.”

Who’d have believed a decade or two ago that we’d see movements like Black Lives Matter being effectively and courageously led by young people, Nelson said.

“Even as these movements happen across the country and around the world, there are immigrants at the border, and that requires us to do some significant thinking,” Nelson said. “We have to have that perspective that speaks to the broader issues,” including hunger and the degradation of the environment.

That’s exactly how many mission co-workers spend the bulk of their time and talent in the mission field, Casal said.

“Mission co-workers do ministry with women, educate women and children, address the root causes of poverty and work in agriculture in many different countries. We need to increase that participation,” he said. “It cannot be just the welfare approach, something you connect with charity. Our personnel more and more are required and requested to be part of the movement of what’s going on in those countries.”

During an international consultation, a mission co-worker explained privately to Casal he’d gotten himself in a bit of a political jam. “I thought it was the fair thing to do. I thought it was for justice,” he told Casal of a particular action he’d taken.

“You know what? I am with you. If you did it for the justice of the gospel, I am with you,” Casal told the missionary, “because you are proclaiming the gospel when you are involved in justice issues.”

“Some people might be concerned we are emphasizing justice and peace but not evangelism,” Casal added. “But evangelism is not just announcing the gospel. It’s living out what we announce.”

“We are speaking very much the same language,” Nelson replied. “The reality is, the only way to evangelize is to come with a justice understanding. Those individuals who are marginalized need someone to stand with them.” Nelson recalled a church he once served where “it was a stand for justice that brought people to the church.”

Mission is work “that we have to do with others — other Christians, other faiths around the world,” Casal said. “God’s mission is done by God’s children — and God’s children is everybody.”