Hundreds of mourners gathered on Friday to say goodbye to the Rev. Robina Winbush, who died March 12 at age 61. A procession of clergy, accompanied by African drumming, opened the funeral/worship service at Broad Street Presbyterian Church in her native Columbus, Ohio.

The service was officiated by the Rev. Dr. Diane Moffett, president and executive director of the Presbyterian Mission Agency, who also led the worshippers in hymns and prayer.

Winbush, the director of Ecumenical Ministries with the Presbyterian Church (U.S.A.)’s Office of the General Assembly, died March 12 as she deplaned in New York. She had just returned from a 10-day visit to the Middle East with a church delegation.

“It is here in this holy space that we are able to lay our sorrows and confess our sin. We know God is good all the time,” he prayed. “We celebrate, joyful that you have given us Robina Winbush. She is in the company of the resurrected and will live in those she’s touched at home and the church around the world.”

Winbush’s brother, Donald, told the crowd that her grounding and calling in ecumenical work began when she was a child. 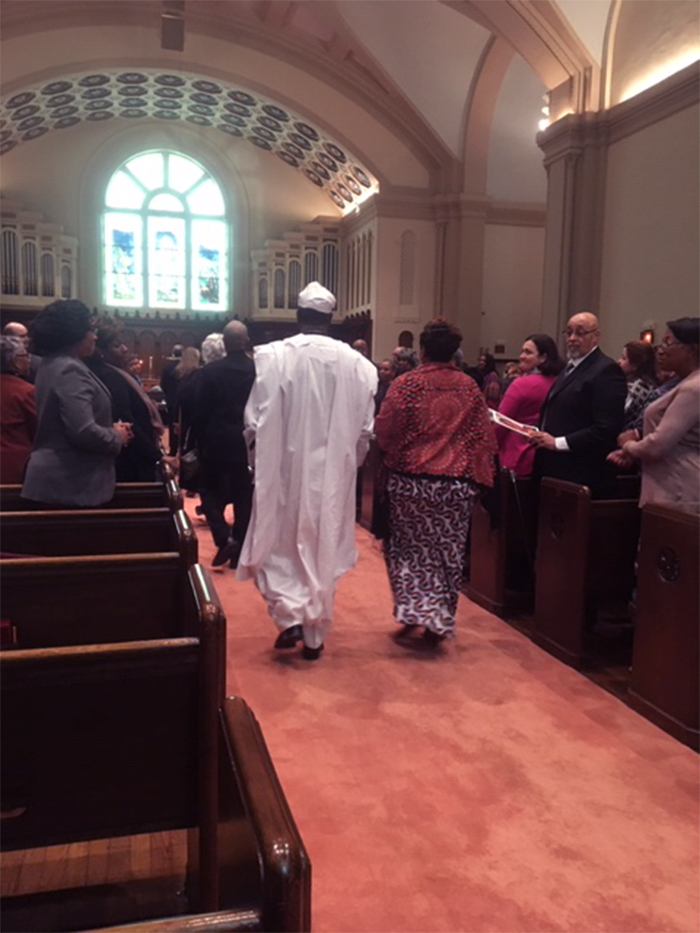 A procession of clergy enter the sanctuary of Broad Street Presbyterian Church in Columbus, Ohio, for Robina Winbush’s funeral. Photo by Rick Jones.

“Oh, what a mighty God we serve. I look at Robina’s life and say wow. This is what service looks like and what service is about,” he said. “She set the bar for a lot of us to recognize and know what service really is. Her service was literally service around the world.”

Winbush credited the Rev. Dr. Cliff Kirkpatrick, former Stated Clerk of the General Assembly of the PC(USA), for opening the door for his sister to serve worldwide.

“As reluctant as she was, Robina didn’t want to leave her church, but God stepped into her life, and she was obedient enough to allow him to work through her around the globe. Obedience is better than sacrifice,” he said.

“I think it was her compassion to fight for justice and equality for diverse populations, that the Lord God revealed to me that Robina was a woman of faith and somebody I could trust,” she said. “I heard her last words were ‘Come, Jesus, come,’ and that’s the Robina I know. She fell right into the arms of Jesus, who said, ‘I am the Alpha, I am the Omega. I am the resurrection and the life.’ Robina’s spirit shall live on. Keep the faith.”

The Rev. Reggie Tuggle worked with Winbush in church ministry.

“She had some rare talents. It isn’t commonplace what she did and had. She was a life force for joy, peace and love. And her love for Jesus Christ was authentic,” he said. “We need to remember to thank Jesus, her savior, the one whom she served faithfully, genuinely, with great power and discipline, all of her adult life. Robina is safe with our Lord and savior.”

The Rev. Dr. J. Herbert Nelson, II, Stated Clerk of the Office of the General Assembly of the PC(USA), shared his experiences working with Winbush and her hope for life after death.

“Today, we don’t have to worry about where she is. We don’t have to mourn too long because she lived a life trying to get to the place she is right now, in the arms of Jesus,” he said. “She was something else. She was strong and also loving. I am going to miss her.”

The service concluded with a prayer from Moffett and the singing of “Soon and Very Soon.”