Home News Are you pondering a call to ministry?

Are you pondering a call to ministry? 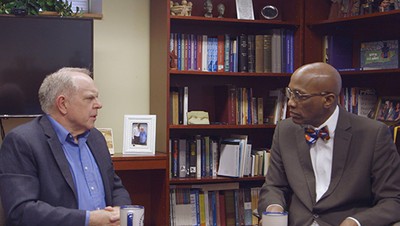 Whether in the battlefield or the corporate world, there is a need for chaplains. So says the Reverend Lyman Smith, Director of the Presbyterians Caring for Chaplains and Military Personnel (PCCMP). Smith appeared this week on Coffee with the Clerk, a Facebook Live broadcast with the Reverend Dr. J. Herbert Nelson, II, Stated Clerk of the General Assembly of the Presbyterian Church (U.S.A.).

Smith says chaplaincy is a great way to train individuals to be good pastors.

“I’m a retired navy chaplain and when I was on a ship, everyone was my congregation. It did not matter what their faith construct was, what they did before, or what they would do afterwards. I knew them, and they knew me, and they were willing to come to me,” he said. “Our chaplains play a huge role in some of the institutional ministry that we do, and they are being used by God in a number of places around the world, literally saving lives.”

Smith says one of the key requirements of being a chaplain is to have a pastor’s heart and his organization nurtures that before a chaplain is assigned.

“Any individual preparing for ministry would have their life enriched by spending two to three years in the military. The military gives you excellent training we don’t have anywhere else,” he said. “Because of the nature of what they do, when you are a chaplain in the military, you have to figure out what your faith is and how it relates to the people you’re working with.”

In Chaplain’s School, Smith says he was on equal basis with chaplains of other denominations. They were instructed to form a team that consisted of a Seventh Day Adventist, Christian Scientist, Mormon, and Orthodox Rabbi.

“We learned to treat each other with the same dignity as those we went to seminary with,” he said. “It is a very challenging experience for those who’ve never lived in that environment.”

Smith says chaplains are given the opportunity to minister to veterans who have experienced the horrors of battle and death.

“It’s your opportunity to show the love of God in a way they’ve never received it before,” he said. “Once you’ve served as chaplain and then go into a church, you have a better understanding of how you relate to the larger community and how to communicate in ways you may not know.”

Smith says chaplains are trained to be change agents, to come into a situation, assess it, and work with the commanding officer to enact that change.

“We have a problem with veteran suicide in this country, taking an average of twenty lives a day. For males, the suicide rate is one and a half times the rate of people who are not in military, for females, it is twice the rate,” he said. “Chaplains can bring a sense of peace. We would love to stop war, but as long as we have threats, chaplains are the people to bring peace in the midst of that.”

In addition to military, chaplains are also assigned to the Federal Bureau of Prisons, the FBI, Alcohol Tobacco and Firearms, as well as police departments and other first responders.

“When we look at demographics of the religious population, the Department of Labor Statistics says there are more chaplains than congregation pastors that are being paid for what they do,” said Smith.  “Chaplaincy has taken off in sports, in fact NFL teams have chaplains. But it’s a greater growth than that. Chaplains are in industry.”

While hospital and military chaplains are the most visible, Smith says a lot of secular institutions are seeing the need for chaplaincy.

“Chaplaincy is much larger and presents opportunities to think about how we do it and whether we do it well,” said Smith. “We need to make sure our professional chaplains are ministers of the Word and Sacrament, empowered and called by God and empowered by the denomination to be at the same level of other ministers.”