Home News I was in prison, and you bailed me out

I was in prison, and you bailed me out 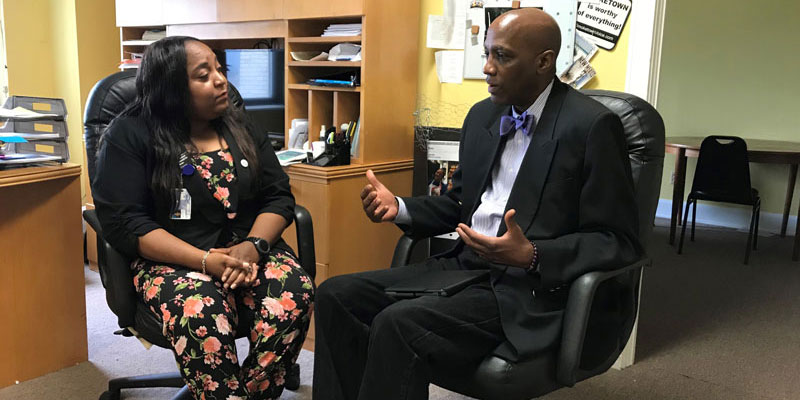 If Shameka Parrish-Wright continues to do her job well, she won’t have it for much longer — and that’s fine by her.

Parrish-Wright, site manager for The Bail Project in Louisville, Ky., has worked for the past year helping to free nearly 900 Louisville-area low-income residents, many of them accused of misdemeanor offenses and stuck in jail because they couldn’t raise cash bail as low as a few hundred dollars.

By paying bail for people who are without ready resources, The Bail Project seeks to combat mass incarceration, ease jail crowding and recycle its bail funds up to three times each year by, once the person has paid bail, helping him or her to show up for their court dates to ensure the bulk of the bail money is refunded. “It’s the gift that keeps giving,” she says.

The Bail Project is working to replicate the success it’s enjoyed in Louisville and a handful of other communities in cities across the country. Bringing its mission to an end is what Parrish-Wright and about 50 colleagues working in communities as different as Spokane, Wash., and The Bronx in New York City are trying to do.

And they’re grateful for help from partner faith-based organizations like the Presbyterian Church (U.S.A.),Parrish Wright told the Stated Clerk of the General Assembly, the Rev. Dr. J. Herbert Nelson, II, Monday during his weekly Facebook interview, “Coffee with the Clerk.”

Last year during General Assembly, hundreds of Presbyterians marched to the Justice Center in St. Louis to deliver enough money donated by Presbyterians to free dozens of people accused of misdemeanor offenses. A similar march followed by cash bail payments for selected incarcerated people is being planned for Louisville sometime next month. The date and time and other details surrounding the march are still being worked out.

Parrish-Wright said her father was incarcerated for more than four decades, and she herself spent more than month in jail as an 18-year-old mother. “I took a plea deal to get out and go to college,” she told Nelson. “I wasn’t thinking about the future and how it might affect my employment status. You are in the moment during the worst part of your life, but you have to make decisions.”

Getting out of jail in advance of the incarcerated person’s first scheduled court appearance “gives people a better chance to prove their innocence,” she said. “Nobody can fight for you like you can.”

Nelson called bringing an end to the cash bail system “a powerful opportunity for the Presbyterian Church (U.S.A.) to extend its witness.”

“This is not a flash in the pan for us as a denomination,” he told Parrish-Wright. “It impacts so many communities and preys upon poor people who can’t afford cash bail or feel forced to plead guilty.”

Parrish-Wright said The Bail Project has bailed out the children of people involved in the justice system, including judges and corrections officers “who have thanked us for the what we are doing,” she said. “People are able to keep their jobs, keep their kids and take care of their families. They just want to get on with living their productive lives.”

“It’s hard work, and we do ruffle some feathers,” she acknowledged. “People say, ‘They did the crime, they ought to do the time.’ But these are people who have not been convicted. They just want to navigate the justice system in a fair way.”

The cash bail system can end, Nelson said, “when people stand with Christ Jesus, who set us free. This is a place where Presbyterians can have a dramatic impact. The next time we are together,” he told Parrish-Wright, “we will be out marching.”