Home News Breaking down the walls through grace

Breaking down the walls through grace 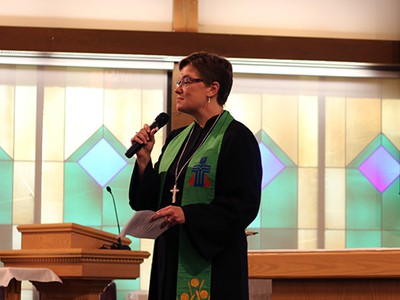 In Ephesians, Chapter 2, the reader is reminded that God is rich in mercy and grace, and people are saved through grace, not by good works. On Friday, the Reverend Cindy Kohlmann, Co-Moderator of the 223rd General Assembly (2019) of the Presbyterian Church (U.S.A.), shared that passage of Scripture during a worship service at Travis Air Force Base near Fairfield, Calif.

Kohlmann spent most of the week in the area, participating in a forum held by military chaplains on the growing suicide rate among veterans. The service was held prior to the regular meeting of the Presbytery of the Redwoods.

In her message, Kohlmann reminded attendees that no one is immune and good deeds alone will not be enough in the sight of God.

“It is by grace that you have been saved, not by works or something you have done. It is by grace. None of us are anything in the eyes of God except by that grace and the immeasurable abundant love of Jesus Christ,” she said. “That is awfully good news to me that it doesn’t depend on my own ability or what I am able to accomplish or the failures I manage to squeak through. It doesn’t depend on me.”

Kohlmann said that when we divide ourselves from one another by race, class, gender, career, language, and a wall, it only breeds hostility between people.

“Resentment begins to build up because we are not living as people saved by grace. We live as if our own works are what matters. That’s why we have to start with that baseline, the foundation,” she said. “If we can grasp that in the deepest, most sacred parts of ourselves, the way we function will change. If we are able to inhabit the belief of grace, it releases us to live into that grace and promise.”

Kohlmann referred to the struggles of the disciples. “They stumbled and bumbled along the way making mistakes, but by grace, they are saved. Because of that, we are on a level playing field in God’s eyes and approach the throne of grace from the same spot.”

The Co-Moderator told the group Christ calls faith leaders to address the barriers and walls that have been built.

“Here in this place, we are gathered with brothers and sisters who serve in the armed forces, and I am sure some here have protested the wall between war and peace. We build walls almost like it is a natural default for us,” Kohlmann said. “I believe this is the time for the PC(USA) and the Presbytery of the Redwoods to live into this dream that through Christ we can break down walls of hostility that divide us. Our God will indeed reign, but we have to be at work to do it and can’t sit by and wait for someone else to pick up an ax and take down that wall.”

Travis Air Force Base is served by 25 chaplains comprised of multi-faiths, including Christian, Jewish, and Muslim military personnel. As many as 26,000 service men and women are stationed there.