OGA leader to set sail on new adventure this fall 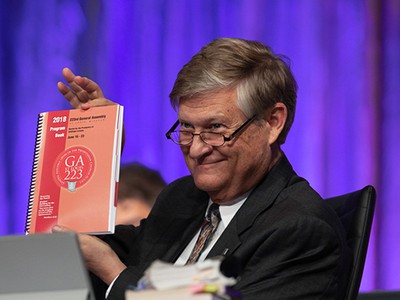 Now, Hay is about to embark on a new adventure. The director of Assembly Operations with OGA will be stepping down this fall after 11 years on the job.

Hay began his ministry as a parish pastor in North Carolina and Virginia, a position, he says, he truly misses.

“The pastor is the one that gets invited to stand with the groom as they prepare to walk into the church, to hold the hand of someone in hospice as they pass.  It’s such an honor,” he said. “There’s nothing in the world like a Presbyterian elder. I have had the honor of working with some remarkable men and women who were elders in churches on sessions, presbyteries. They were patient with me and mentored me. They were witnesses of faith in ways that enriched my life and I will carry that with me the rest of my life.”

Twenty years in the pastorate, and Hay was offered the opportunity to be presbytery executive with Shenandoah Presbytery, a decision he didn’t take lightly.

“I’m a preacher’s kid and do not remember when I wasn’t being impacted by other ministers. I was talking to my older brother about this opportunity because I was not sure I wanted to leave pastoral ministry,” he said. “My brother told me the presbytery has been taking care of us all of our lives, maybe it was my time to give back. So, I went to Shenandoah Presbytery and it was a wonderful 10 years. I preached in 114 churches, got to know some remarkable pastors and elders there. I found that helping pastors be pastors and supporting them was an important work of the church.”

Upon Gradye Parsons’ election as Stated Clerk of the Office of the General Assembly of the PC(USA), Hay was invited to become director of operations. Having served as a volunteer at General Assembly over the years, he says he was no stranger to procedure and format. During that time, he says he felt it was time to make a few changes.

“Over the years, we folded worship into the agenda to make it worshipful work. We redesigned the platform so there was not a separation with the floor. There are steps now. We brought in communion tables and a candle to the platform to make it a holy space,” he said. “We brought in musicians to play as people gathered to build a spirit of unity, fellowship and worship. All of that, I believe, helped form a lot of the decisions made over last 10 years.”

As he looks back at the assemblies of years past, Hay says the 221st General Assembly (2014) sticks out most in his mind when the assembly voted on open ordination. “I didn’t expect the GA to do that at that assembly. It was a step of faith and an act of the Spirit. That has impacted the direction of the church in painful and positive ways,” he said.

Hay says he’s excited about the PC(USA)’s future and believes better days are ahead.

“I think that the mainline church has looked at the hard questions and worked through that and is now in a better place to engage on social justice issues and of witness and less on institution than they have in the last 50 to 60 years,” he said. “I’m excited to see what that means for the church going forward. It’s a place that is taking seriously our call to enable all voices and to confront the institutions in and outside the church that have silenced voices for many generations.”

Hay plans to remain in his position until fall, but then will pack up, sell his house and head for the open sea.

“It’s always been important to me not to retire from something but retire to something. And the life of living on a sailboat that is our only home to see where it takes us, to learn a new set of skills and see new people and learn new ways to live, is an adventure I’m looking forward to,” he said. “I’m excited to be trying something new.”