Home News ‘The way that God would have the church operate’

‘The way that God would have the church operate’ 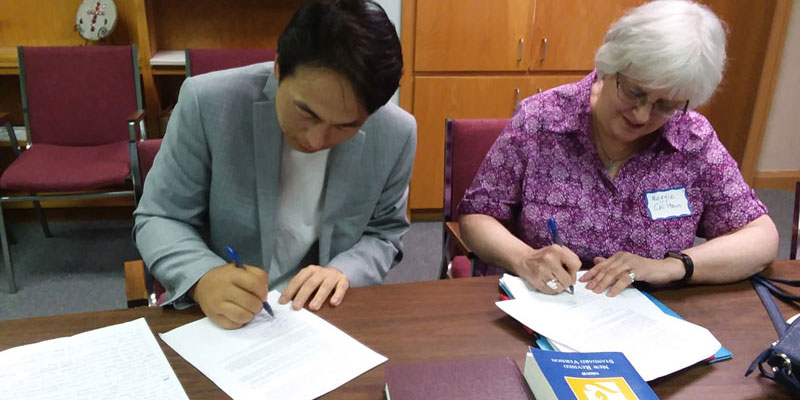 The 40-minute worship service was broadcast via Facebook Live in lieu of Coffee with the Clerk, a talk show hosted each week by the Rev. Dr. J. Herbert Nelson, II, Stated Clerk of the General Assembly of the Presbyterian Church (U.S.A.).

Both housed at the Harvey Browne Presbyterian Church, the two congregations received an $18,000, one year Vital Worship Grant from the Calvin Institute of Christian Worship. On Monday ruling elders from the two congregations signed an agreement to lay plans for greater and more interactive participation between both bodies of believers.

The Rev. Yohan Kim, associate pastor of the Korean Presbyterian Church of Louisville, used as his text for worship Acts 6:1-7, the story of Hellenistic and non-Hellenistic Jews who formed the early church in Jerusalem coming together after the former complained that their widows were being neglected in the daily distribution of food. Seven men — all of them with Greek names, Kim pointed out — were selected to provide for the needs of the widows, “while we, for our part,” the latter group said, “will devote ourselves to prayer and to serving the word.”

The plan worked: “The word of God continued to spread,” according to verse 7. “The number of the disciples increased greatly in Jerusalem, and a great many of the priests became obedient to the faith.”

“These were Hellenistic Jews, raised in another country like I was,” Kim said during his sermon. “Here we see a great display of love and trust for one another. I really believe this is the way that God would have the church operate.”

Without mutual sacrifice and the relationships that had been nurtured in the early church, there would have been no revival as reported in verse 7, Kim said.

“Is it possible to build up one church with different types of people? Yes, it’s possible,” he said. “Harvey Brown and the Korean Presbyterian Church of Louisville are good examples of this kind of relationship. We have different accents, but both are followers of Jesus Christ.”