The Reverend Joan Salmon Campbell dies at the age of 81 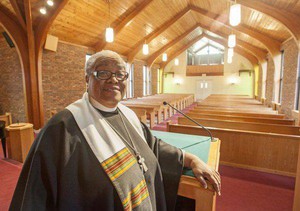 A memorial service was held this past weekend for the Reverend Dr. Joan Salmon Campbell, a longtime Presbyterian pastor. Salmon Campbell died on July 1 at the age of 81.

For the past four years, she served as pastor of the College Heights Presbyterian Church in Fayetteville, North Carolina. She is also known for her history-making turn as the first black female Moderator of the Presbyterian Church (U.S.A.). Rev. Salmon Campbell was elected at the 201st General Assembly (1989).

“We are saddened by the passing of this true champion for Christ,” said the Reverend Dr. J. Herbert Nelson, II, Stated Clerk of the PC(USA). “Joan was a pioneer and her passion and love for Jesus were evident in everything she did, and we are a better church because of her leadership. She will be missed, but her legacy lives on through the witness of others who have come after her.”

“We are grateful for the courage and perseverance, the faith and reliance on God of our sister Moderator, the Reverend Joan Salmon Campbell. She answered the call to serve even when being the first often comes with unique challenges; an inspiration to us all,” they said. “We join our voices honoring her life and ministry. May Rev. Salmon Campbell’s legacy of love, faith, and action live in the memory and endeavors of the denomination she loved and served. Our heartfelt condolences to her family and loved ones.”

The Reverend Dr. Diane Moffett, president and executive director of the Presbyterian Mission Agency, met Campbell during the late 80s while serving her first pastorate at Elmhurst Presbyterian Church in Oakland, California.

“At the time I was also serving as president for the Western region of the National Black Presbyterian Caucus. I hosted her at my home. Joan offered words of wisdom and inspiration that helped to shape my ministry. She also invited me to serve as the morning preacher for the General Assembly held in Utah,” Moffett said. “I am forever grateful for the strength, tenacity, and leadership Joan Salmon Campbell provided at a time when black Presbyterian clergywomen were more subject to marginalization in this denomination.”

“She was vivacious, inspirational, and wise. She was committed to justice and was a good colleague in ministry. It is very hard to be a pioneer who breaks new ground, walking through doors that have not been opened to persons like you before,” Hunter said. “She paved the way for daughters and sons of Christ to serve in the church. It is hard to believe that she is no longer with us. She has fought the good fight; she has finished the race; she has kept the faith.”

After serving at the national level, the West Chester, Pennsylvania, native said she was drawn to serve in the pastorate and led churches in a number of cities including Philadelphia and Cleveland.

Hunter recalls “heart-to-heart” conversations with Salmon Campbell about the stresses and strains of ministry.

“I remember attending an African American clergywomen’s retreat with her many years ago. This was after she served as General Assembly Moderator and after facing challenges in a call that she eventually left for another call that was a better fit for her. I was stunned and grateful that she was so honest, open, and vulnerable, sharing her story and her challenges,” she said. “It was so helpful to young African American clergywomen, including me. By fearlessly walking on unpaved ground, sometimes stepping in holes and sharing her experiences, she helped some of us to learn what holes to walk around. She will be deeply missed.”