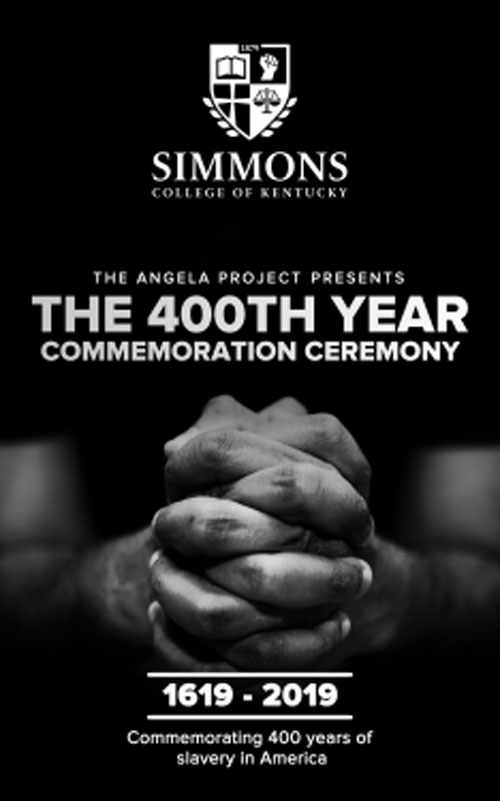 People of many races and representing several faith traditions gathered Tuesday to commemorate Angela, the first African to arrive in the American Colonies 400 years ago for the purpose of enslavement.

Put on by Simmons College and held at St. Stephen Baptist Church in Louisville, Ky., the Angela Project Liberation Ceremony included moving responsive readings in which white people acknowledged and apologized for sins during the slavery era (1619-1865), the Jim Crow period (1877-1969) and their aftereffects (1970 to the present). In turn, black people in the crowd — some who had entered the church in chains, reading brief accounts of people who’d been enslaved — responded by forgiving and then repenting of hatred and unforgiveness for any number of sins committed by whites, including kidnapping, tearing families apart, violently depriving blacks of their voting rights, crafting the theological rationalization of black inferiority and dehumanization, disinvesting in the black community, designing redlined neighborhoods and continuing to incarcerate a disproportionate number of black men (there are more black men in prison in the U.S. than the number incarcerated in nine countries combined: India, Argentina, Canada, Lebanon, Japan, Germany, Finland, Israel and England, nations with a total population of 1.71 billion people, about five times that of the United States).

“Slavery created brokenness and pain that still exists today,” prayed the Rev. Dr. J. Herbert Nelson, II, Stated Clerk of the Presbyterian Church (U.S.A.). Bound together in chains aboard slave ships, “they were thrown overboard when they died from famine or disease,” Nelson said. “For those who made it, who thought they were coming to a new possibility,” Nelson told the Almighty, “your help was eclipsed by those who used them for monetary means.”

“Lord, guide us and heal us and strengthen us,” Nelson prayed. “Help us to take the slavery of yesterday and today away. Help us to be reminded that which eclipses slavery is love. Help us to love more deeply, to love our neighbor as we love ourselves — and to love you above all.”

“American history has downplayed or denied the story of Angela and her descendants,” said Dr. Kevin W. Cosby, president of Simmons College, the nation’s 107th historically black college or university. “We are here to repair history.”

The Rev. Dr. Elijah Brown, general secretary of the Baptist World Alliance, said during a prayer that those gathered confessed not only the pain inflicted on Angela and the “countless thousands” who followed in the Middle Passage, but the “misuse and abuse of Scripture” and “an institution that led to violence and trauma, murder and war, and a legacy that stretches 400 years right to the present.”

“In this holy moment, we repent and ask for healing from the sins of power and privilege and self-interest, the sins of complacency and indifference — and we repent of racism,” Brown said, asking God for “the ongoing courage to change, that your healing may flow through the nations.”

While still in chains, people read the accounts of people enslaved: “Servants in the house were treated worse than dogs” and a master who was at the same time “the devil” and a church-goer.

“When we hear these testimonies,” said the Rev. Dr. Frank M. Smith, founding senior pastor at Christ’s Church for our Community and executive vice president at Simmons College, “do they not sound like existence today in poor black America? Don’t we hear them echo from jail cells and broken homes? We are gathered to require that from now on we will blend our voices with these testimonies and not stand for the perpetuation of such injustices … We will go from chains to social change, until one day our people will be free.” At that point, the chains did indeed fall to the floor, which drew applause from the crowd.

Matt Goldberg, community relations director for the Jewish Community of Louisville, offered a prayer usually recited during Yom Kippur, the Day of Atonement. It’s a first-person plural prayer, he noted, with “we have sinned” followed by a litany of sins: forcibly taking another’s possessions, giving harmful advice, causing our friends grief, being stiff-necked, going astray and leading others astray. The prayer, he said, has a hopeful, penitent closing. “It’s never too late,” he said, “to admit fault and guilt.”

“How long, O Lord, how long?” wondered the Rev. Dr. Alton B. Pollard III, president of Louisville Presbyterian Theological Seminary. “Black life in America has always been regarded as expendable and cheap, but there’s no time for pity and self-despair.”

“We will not be silenced, and we are not afraid,” he said. “God is our refuge and the source of our supply.” Those who toil for justice have three power sources: “the power of God’s presence, the spirit of our ancestors and the gift of those yet to come … We pray, we rise, we resist and we act.”

The 98-minute service “has been, I think we can all agree, an experience we will never forget for the rest of our lives,” Cosby said, thanking people for their participation, including Cheri L. Mills, who wrote the booklet used during the commemoration ceremony.

He invited fellow clergy members to a luncheon that followed the The Angela Project’s ceremony. Cosby said there’s still plenty of work ahead.