New and familiar faces appear before COGA at fall meeting

Ecumenical relations and OGA vision make up agenda on day one

COGA holds its fall meeting at the Presbyterian Center in Louisville. Photo by Randy Hobson.

There was a full agenda on the first day of the fall meeting of the Committee on the Office of the General Assembly (COGA). The meeting on Wednesday began with a greeting from the Reverend Dr. Shirilele Patrick Nyambi, Moderator of the Evangelical Presbyterian Church of South Africa, who was visiting the Presbyterian Center.

“This is the first time in my life to be in the United States,” said Nyambi. “I have met with the Stated Clerk and OGA staff as well as Compassion, Peace and Justice and World Mission. I think we have a lot to learn from the PC(USA) and will take it back home with me.”

Ruling Elder Vilmarie Cintrón-Olivieri, Co-Moderator of the 223rd General Assembly (2018), reported on the many travels for both her and the Reverend Cindy Kohlmann, who could not attend the meeting. Kohlmann is currently traveling to South Africa on behalf of the church.

“In our time serving as Co-Moderators, we have talked with 15 presbyteries, two synods, four seminaries, and numerous congregations in five month,” she said. “We have traveled from one end of the country to the other and have been blessed to see the church in action. We have led forums and workshops. We’ve been preaching, teaching, and commissioning. We have witnessed baptisms and ordinations and have visited presbyteries and mid councils that may not always have that personal connection.”

Many of the workshops, she says, involve the book study program the Co-Moderators launched earlier this year with "Neighborhood Church: Transforming Your Congregation into a Powerhouse for Mission."

COGA also heard from Dianna Wright, interim director of Ecclesial and Ecumenical Ministries with OGA. It was her first appearance before the committee since taking the position in July. 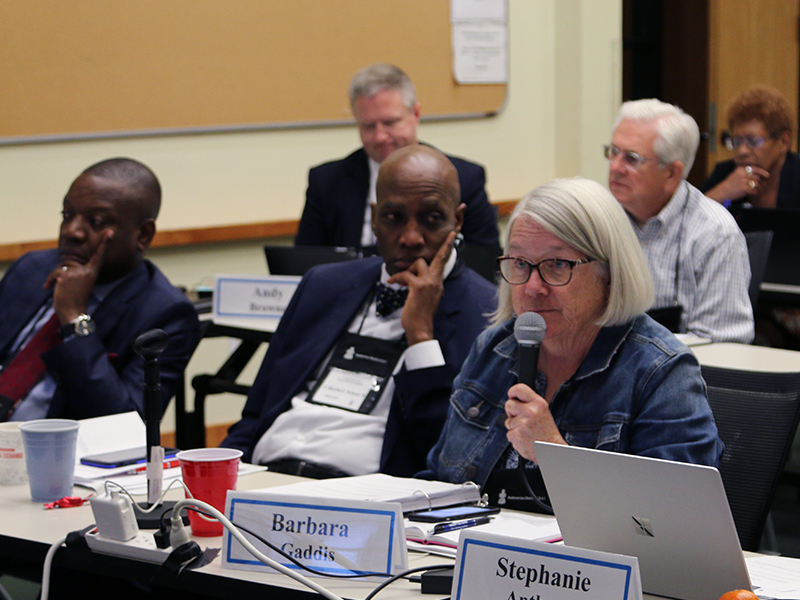 “For the past two months, I’ve been conducting a forensic audit, digging in to see the breadth of the work Robina Winbush had been doing and gaining the fullness of her work,” she said. “I discovered a deep and rich well with relationships in all of our agencies and internationally.”

“We spent time on how to develop right, relevant relationships with our congregations. We don’t want to just gather for meetings, but make sure the meetings have impact in the communities we are with,” she said. “As many as 50 people gathered at GACEIR, representing Baptists, Episcopalians, Presbyterians and others. We will continue to process what we learned and have conversations with the Stated Clerk. It will take a while, but we are committed to working through the information we’ve gathered and to developing goals on where we need to be.”

The Stated Clerk Nominating Committee reported that it has finalized the proposed job description for the upcoming interview process. The committee comes together every four years to consider nominations for Stated Clerk.

“We will begin accepting applications for nominees on October 1. The job description will guide conversations with the candidates in January,” said Committee Member Wilson Kennedy. “We will present a nominee to the church by April 21st, approximately 45 days prior to the next General Assembly.”

The Reverend Dr. J. Herbert Nelson, II, Stated Clerk of the General Assembly of the PC(USA), will wrap up a four-year term next summer. He is eligible to seek nomination and election for another term. 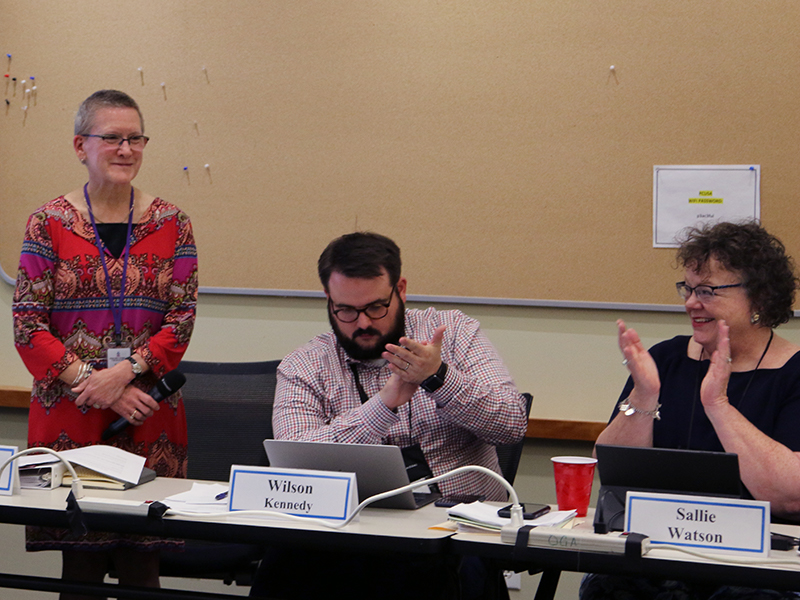 Kathy Lueckert (left), the new president of A Corp, appears before COGA. Photo by Randy Hobson.

COGA also heard from Kathy Lueckert, the new president of the Presbyterian Church (U.S.A.) A Corporation (A Corp), the principal corporate entity of the General Assembly of the PC(USA).

“We are the strong roots that help trees of ministry grow to blossom and provide shelter. We do that by earning trust every single day by focusing on the needs of our clients,” she said. “One of our challenges is figuring out who we are as a team. That work is underway. I am encouraged by the spirit and can-do attitude. We are not talkers, we are doers.”

“We did a deep dive, met with different ministry areas to ensure the vision statement reflects our work,” she said. “We are always working to ensure the plan doesn’t get put on the shelf. We are laying groundwork and planting seeds that we may not see come to fruition.”

COGA finished the day in executive session. The committee meets through Friday at the Presbyterian Center in Louisville.

Tags: coga, committee on the office of the general assembly